A NEW LOOK AT THE ROMEO AND JULIET STORY

ROCHESTER, N.Y.—. Love and war, politics and religion, past and future collide in Bellini’s I Capuleti e i Montecchi (The Capulets and the Montagues), a gripping version of the Romeo and Juliet story by the composer of Norma. Eastman Opera Theatre continues its 2006-2007 season with this rarely performed, but beautiful and dramatic, work.

While I Capuleti e i  Montecchi  centers on the doomed love story of Romeo and Juliet, Bellini’s opera differs significantly from Shakespeare’s play. Here, the Capulets and Montagues are not Shakespeare’s rival families, but represent rival political-religious factions.

“War dominates the atmosphere of the story,” says Eastman Opera Theatre director Steven Daigle. “Verona and the Capulet palace is under assault, and a sense of urgency permeates the opera’s events. The emotional content is extreme: revenge, betrothal, power, survival, marriage, love, death, and remorse.”

Daigle, stage director for the production, is setting the action in the future, in a ruined version of the city of Verona. “History has told us that this story on different levels has played itself over many times (in both and real life),” he says. “The players may change, but consequences never do. In Eastman Opera Theatre’s production, we see the weight of a future pressing on ‘a lesson not learned,’ and look into Verona’s future, where war and politics continue to strangle the purity of love.”

Musical director and conductor for I Capuleti e i Montecchi is Benton Hess. This production will be sung in Italian, with English surtitles.

If you’re interested in learning more about I Capuleti e i Montecchi, the Friends of Eastman Opera Theatre will sponsor pre-performance talks that are free and open to the public. The talks, presented by Professor Russell Miller of Eastman’s voice department, will be held in Room 120 of the Eastman School on Friday, Saturday and Sunday, April 13, 14 and 15. Each talk begins one hour before curtain time. 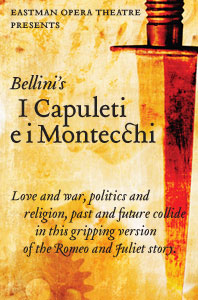