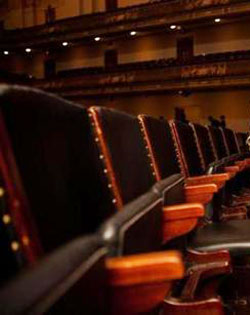 This thoughtful essay rings true! It's hard to be on the edge of one's seat if the seat is a… Paris has a new, state-of-the-art concert hall, something the French have been waiting for since they dispatched Louis XVI in 1793, thus making possible government- funded arts venues for the people. It’s called the “Philhamonie de Paris.” Not the most inventive of names I would suggest. It was designed by Jean Nouvel and opened in the midst of controversy over a €187 million budget overrun and three-year completion delay. Indeed, architect Nouvel was so affronted by accusations of extravagance that he demonstrated true Gallic temperament and refused to attend the grand opening given before the Parisian elite including President Francois Hollande. Looking at the pictures of the building reveals that a great deal of money was spent in making the hall an absolute palace of culture. In studying the design I started to ask myself if, in this day and age of social unrest and economic gloom, the French were getting their priorities jumbled. Just before Christmas my wife and I made a special journey to London to see the Royal Shakespeare Company’s (RSC) production of Henry IV, Parts 1&2 at the Barbican with that wonderful spirit of the theatre Antony Sher as Falstaff. It did not disappoint. But the actual experience of sitting in the theatre gave me pause for thought, and I don’t intend this to be another bashing of the Barbican as an Arts Centre. I think that’s all been done to death. No, this was more generic and has to do with our expectations of the actual physical experience of sitting in an auditorium. Using the Barbican as a pretty standard example of going to a live arts event these days, I have to say that contemporary audience expectations are for total immersion in creature comforts–very likely conditioned by the décor of modern movie theatres and the quality of their furniture at home. The Barbican theatre has so much leg room that you don’t even have to move when patrons up the row sidle past you trying to find their seats. The seats, well they aren’t seats really, they are more armchairs which sink with gorgeous delight as your posterior makes contact. It is beautifully comfortable and warm and cozy. I am sure Jean Nouvel’s Parisian masterpiece has all the same features. But ….. was art really meant to be experienced in such luxury? At the Barbican, the plush appointments had the effect of dulling the senses to such an extent that vast tracks of the crowd were happily dozing during some of the Bard’s greatest prose and verse. Have we made our live arts experience the same as watching TV where our brainwaves relax to the point that we enter the second stage of sleep (which is the one just before you start snoring)? Is this the level of engagement that we want with the amazing live visceral thing happening before us?? We certainly seem to be planning and building to cater to this.

Live art is meant to make us feel uncomfortable, to challenge us intellectually and emotionally, to make us live, to burn with passion, to be complicit in the very act of creation. Our brains are where the action is, not our bottoms, and many of the great older halls get this just right. You try nodding off at the Bayreuth Festspielhaus, or the Concertgebouw in Amsterdam or the Musikverein in Vienna or Symphony Hall in Boston (in photo) or New England Conservatory’s Jordan Hall. These places are downright uncomfortable and yet we revere them for their great acoustics and histories of the finest performances and performers. The recent building of the Globe in London is a terrific example of a modern architect reimagining the theatre of Shakespeare’s time and producing something so exciting and so uncomfortable (you have to stand downstairs and the balcony seats are benches with back breaking powers) that you just have to stay awake, alert and in the moment. Or the Brooklyn Academy of Music’s Harvey Theatre which, when it was refurbished back in 1987, consciously maintained its “distressed” look, suggesting that it still needs money spent on it. What a great idea for inspiring continuous philanthropy!

I can think of so many experiences from my life where the venue was immaterial but where the performance was transcendent and magical. Janet Baker at the BBC Proms in 1982 in a semi-staged production from Glyndebourne Opera of Orfeo ed Euridice in a summer sweltering Royal Albert hall (the temperature was at egg boiling levels) and where the quality of the seats would have left Ryanair (Ireland’s no-frills, discount airline) embarrassed. But the focus was the art on stage and its breathtaking quality and emotion still stay with me. Britten’s War Requiem from Guildford Cathedral where the hummed “n”s at the end of the Amen stayed in the air and made it move for seconds upon seconds (which reminds me…….worship was not meant to be comfortable either. God never cared about the quality experience of our bottoms. Nonetheless, there are now companies that market comfortable pews and theatre chairs to churches.) Or an evening violin recital at Brecon Girls’ School main dining room, which was still reeking from the over boiled cabbage served at lunchtime, but where the performance, by an unknown violinist who has travelled all the way from London, introduced me, aged 14, to Stravinsky’s Duo Concertante, and Schonberg’s Phantasy, rendering me excited and frenetic with the energy of discovery despite the hard school seats and lack of intermission refreshments. But it would seem that only luxurious appointments and extravagant, eye-catching exteriors will do when it comes to building a concert hall today (or a new museum, for that matter). This is true even when there is an intention of appealing to a broader swathe of society. The architect, designers, and builders know that the good bourgeoisie take care of their “bottom” comforts and plan accordingly. But it makes one wonder: Didn’t the French have a revolution to address all that? Plus ça change!!