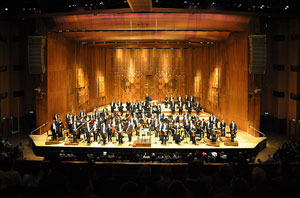 There is a debate raging in London surrounding Sir Simon Rattle’s apparent stipulation that he will only consider the London Symphony Orchestra’s invitation to become their new Principal Conductor if the City fathers build him a new concert hall to replace the unpopular Barbican Centre. I use “unpopular” in the sense that the hall’s poor acoustics have plagued its credibility since its opening in 1982. The complex has many other shortcomings, but now is not the time to labour the point because some really determined people over many years have made it work despite the odds. Suffice to say the hall is not on the international shortlist of the world’s acoustically perfect venues, but it nevertheless functions well.

The possible successor to the LSO’s current Principal Conductor, the energetic and quixotic Valerie Gergiev, Rattle came onto the scene as the Gustavo Dudamel of his day in the 1970s. He made his name in his late 20s leading the relatively obscure City of Birmingham Symphony Orchestra to new and unimagined heights and he remained at its helm for 18 years. During this time he spearheaded the development and building of Symphony Hall Birmingham, whose acoustics, designed by the mercurial Russell Johnson, became the standard for all future developments around the world. One of Rattle’s predecessors by a few generations, the great English conductor Sir Adrian Boult, had warned him at the start of his tenure that such a feat could never be accomplished given the local political scene and leadership. So, with Rattle, we clearly have a formidable musical leader whose determination is matched by an unswerving and intuitive political skill. His appointment after Birmingham was to perhaps the greatest of all orchestras, the Berlin Phil, and this is testament to his formidable musical talent. Thus, his reported challenge to the London City fathers is not one to be taken lightly or dismissed as the over-ambitious ravings of a maestro out of control. The LSO has been the loyal resident orchestra of the Barbican (in photo right) right from the opening (very different to the Royal Shakespeare Company which signed up at the same time and then abandoned the Centre in 2002) fully subscribing to the original vision of a new and exciting path for the arts in London. The orchestra’s Principal Conductors during all this time make for an Olympian roster of the world’s most distinguished musicians: Sir Colin Davis, Michael Tilson Thomas, Claudio Abbado and, latterly, the Russian maestro Gergiev. It’s an orchestra capable of great artistic ambition and vision as Clive Gillinson demonstrated in the 1990s when he found the resources to buy, renovate and establish Saint Luke’s, a beautiful but neglected Hawksmoor church in north London. This has become the major centre for the LSO’s community engagement programme and a place for artistic partnerships with groups such as include some of the partners mentioned in our earlier blog, How to miss the Titanic. It is a fascinating and rare example of an orchestra thinking differently, considering the community and beginning to reinvent its place in society.

So… why do we need a new concert hall in the city of London? Is the Barbican really beyond the pale? Totally unacceptable to musicians and audiences alike? Is Rattle onto something truly imaginative and exceptional? I think at this point in time we need to take a deep breath and ask some really fundamental questions. The press and media are all over this one and obviously excited at the prospect of luring back Rattle to his homeland. They also argue for something that London really needs. And this feeding frenzy, I fear, could obscure some rational and strategic thinking that needs to be put in place before anyone signs up for a project that could cost as much as $500 million.

The new hall proposition could all be viewed as rather self-serving with a little bit of artistic blackmail thrown in but is this how Rattle wants to be seen? The cost of the new hall is a vast sum of money even for the wealthy City. And once the venue is built, it’s going to require future funding for operations and upkeep, generating a very large financial black hole. And what then becomes of the Barbican with its excellent facilities and infrastructure? For the argument to reduce to “buying” Rattle based on a commitment to a new concert hall is presenting a most unimaginative–even retrograde–vision for the engagement of one of the world’s most creative artists, a vision that could well conflict with the orchestra’s very forward looking programme. Building concert halls is a bit like having the Olympics foisted upon your nation. What appears to be an immense opportunity quickly devolves into a fiasco of excessive public spending with dubious return on investment. (Just look at the massive overspend on the new Paris Philharmonie of €187 million, pictured right.) Should orchestras today be demanding more resources and facilities at a time when their relevance and indeed legitimacy are in serious question? Surely they don’t need more concert halls. They probably actually need fewer. Why? Because they need to get out of those citadels of privilege and perceived intimidation and into the community. They need to break down the barriers of the stage and formal presentation and create new relationships and new experiences with an audience as broadly based and diverse as society itself. Who are new concert halls for anyway? Not the broad community, that’s for certain. Sometimes I think they’re just for the musicians, but at the end of the day it’s undoubtedly elite society that uses such venues to certify its prestige.

The design and construction of new concert halls are always constrained by a narrow band of musical needs that can be defined as exclusively “classical”. Such a criticism will be seen as heretical in so many quarters as acoustics are the be-all and end-all to so many people but just consider the constraints they impose which are so unbelievably limiting. That is not to say that acoustics aren’t important, but there are so many other types of music and experience which require different formats and sound as well. At a time when classical music is struggling to present new ideas and to establish a more contemporary and egalitarian position, the prospect of another musical gated community leaves a sense of disappointment. Rattle has shown himself in the past to be a creative and imaginative manager of resources and ideas. Through his advocacy for Venezuela’s El Sistema program (in photo right, Gustavo Dudamel conducts outdoor concert) and its international outgrowth, he has also endorsed the inclusion of all people in the experience of great music. The education community programme that he initiated at the Berlin Phil I consider to be one of the most serious and imaginative in the world, what with members of the orchestra working with the immigrant community, particularly those from Turkey. The programme has done much to reposition this elite and musically excellent ensemble in the community by enhancing its legitimacy and social relevance.

I salute Rattle in this endeavor and I hope and trust that horse trading over the question of a new concert hall will disappear and instead Rattle will tempt the whole musical world with a vision for an orchestra in London that could be seen as the model for the future. Now that would truly be building something of permanent worth.