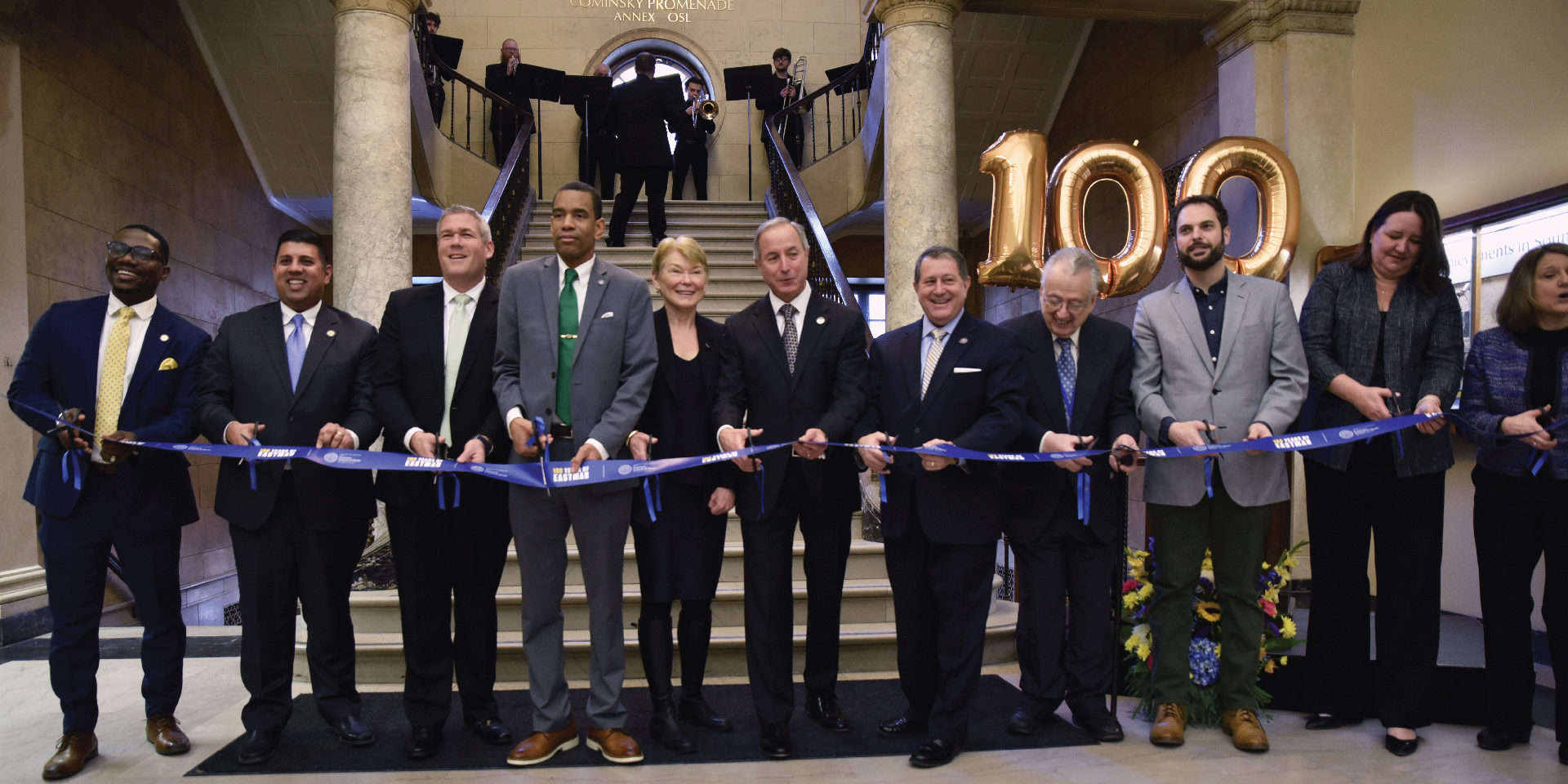 This feature article originally appeared in the Summer 2022 issue of Eastman Notes.

Eastman invited the Rochester community to its celebration of the 100th anniversary of the official opening of its doors to the public on March 3, 1922. This date marked the beginning of a long relationship between Rochesterians and the burgeoning new music school. From its beginnings anchored in silent film projections, through the development of innovative performance and academic programs, to a technology-driven future, Eastman, and Eastman Theatre, has opened doors to opportunities for thousands of people.

Excitement, festive spirit, and joy were palpable throughout the weekend. Eastman musicians performed all around the Rochester area, serenaded our staff in various offices, and presented inspiring programs in our halls and in many out-of-the box venues. Hundreds of people performing in bands, orchestras, and choirs from the Rochester and the suburban areas experienced our halls, and the entire Eastman Community Music School presented a showcase of all its programs.

This weekend was a testament to the professionalism, can-do spirit, and heart that our Eastman community displays daily. May this spirit give us the positivity and strength to meet the challenges and opportunities of our history’s next century. Here’s to another 100 years! — Sylvie Beaudette ‘93E (DMA), Mark Davis Scatterday ‘89E (DMA); co-chairs, Eastman Centennial Committee 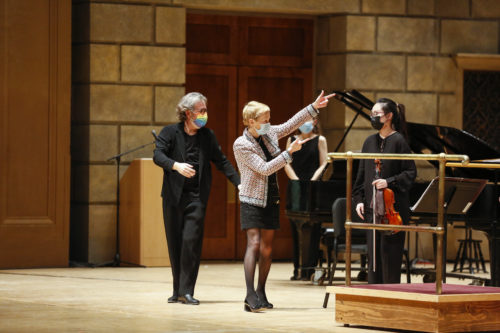 Dancing onstage at Kodak Hall: conductor Brad Lubman and composer Augusta Read Thomas during the applause for her Dance Mobile premiere on March 2, 2022.

The celebration began with a festive joint concert by Eastman Wind Ensemble and Musica Nova that included no fewer than four premieres: ESM 100 by Brad Lubman; Dance Mobile by Augusta Read Thomas; This Door, This Day by André Myers ‘96E, and Symphonies for Wind Orchestra by Jeff Tyzik ‘73E, ‘75E (MM). 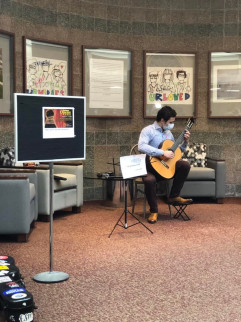 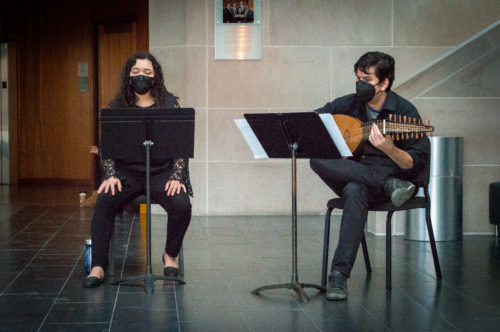 Student performers held for in numerous places across the university,from Wolk Atrium in the Eastman East Wing to Strong Memorial Hospital.

Eastman musicians, chamber groups, and ensembles went on the road, performing throughout Rochester. From the Amtrak Station to various churches and schools, Wolk and City Hall Atriums … and even Strong Memorial Hospital. 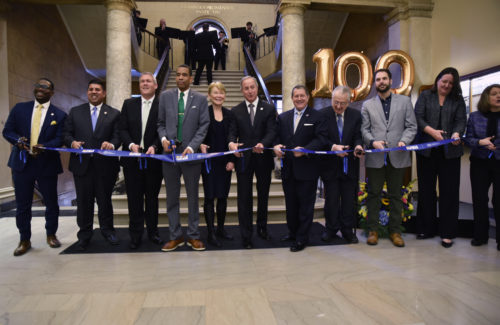 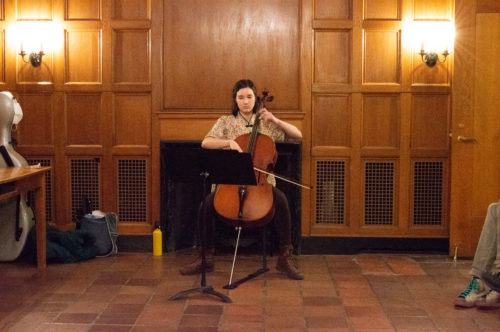 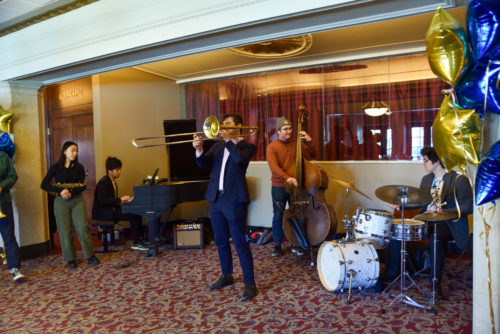 Once the ribbon was cut, the school swung into an immersive Perform-a-Thon, with students playing and singing in locations – expected and unexpected — throughout the campus, including main halls as well as unusual spaces on campus such as the East Wing’s Wolk Atrium and the “wood room” in the Eastman Theatre basement (shown above left, with a jazz combo in the Eastman Theatre “Betty’s Cafe” area)..

The Studio Orchestra concert that evening honored the leadership and inspiration of its retiring director, Bill Dobbins, who conducted charts from students and alumni, as if saying to them: “Now, it’s your turn.” 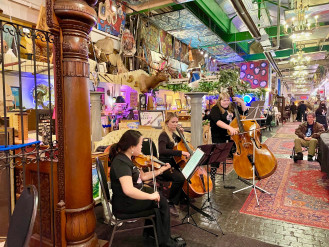 Eastman staged J. S. Bach’s 280-year-old Art of Fugue as a “moveable feast,” a multi-sensory, self-guided walk-through of Rochester’s Artisan Works for audiences of all ages. Fifty musicians from Eastman and our partner conservatory, the Musikhochschule Freiburg, performed fugues and canons in small chamber groups all over the labyrinthian space (a string group and a brass group are shown at left). Audience members decided where to wander, what to listen to, and in what order to listen. 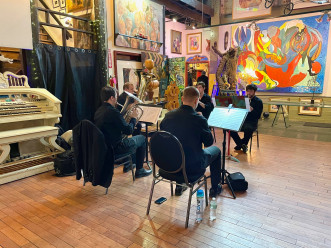 “It was amazing and drew over 500 visitors,” said Professor of German Reinhild Steingrover, coordinator of Bach’s Moveable Feast, who described “Kids dancing to counterpoints played on toy pianos and asking to play some instruments themselves … hundreds of visibly happy people following the sounds and sights all around them.” 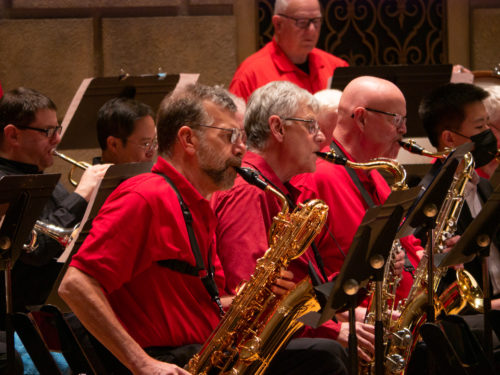 The Eastman Community Music School sponsored an all-day Community Indoor Festival. It started at 10 a.m. with the Pittsford Fire Department Band; after concerts featuring many local ensembles and hundreds of local musicians (including the New Horizons Band, right) the day concluded with two concerts featuring a brace of premieres including Pierrot in America by Professor of Composition David Liptak ‘75E (MM), ‘76E (DMA), performed by Cordancia and Biodance (below). 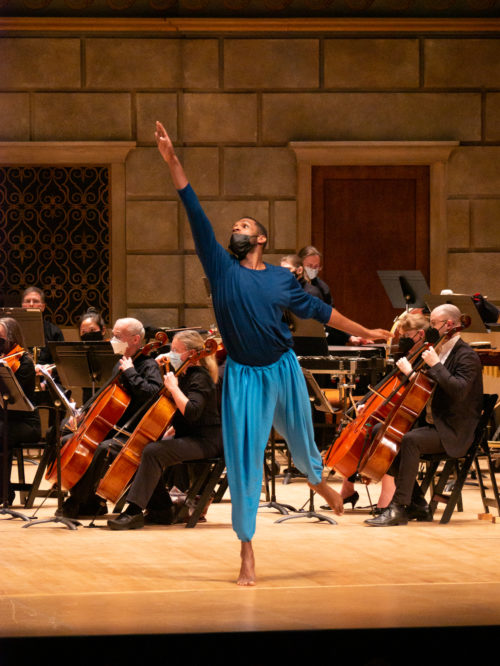