Singing and transforming: Compline with Schola Cantorum Returns this Sunday 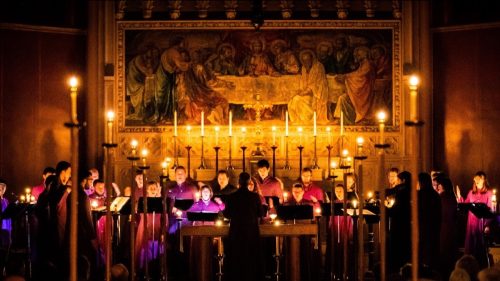 A longtime Eastman School of Music tradition returns this weekend: Compline, preceded by the first Candlelight Concert. The Candlelight Concert, an organ recital by Malcolm Matthews, begins at 8:30 p.m.; Compline begins at 9 p.m. Both events take place at Christ Church, 141 East Avenue.
Compline is performed by Schola Cantorum and directed by Stephen Kennedy, Director of Music and Organist of Christ Church Rochester, Instructor of Sacred Music at the Eastman School of Music, and Instructor of Organ for Eastman’s Community Music School. In 1997, he founded the Christ Church Schola Cantorum to perform the Office of Compline each Sunday at Christ Church.
This acclaimed ensemble of voices and Renaissance instruments specializes in the performance of Plainsong, motets of the Renaissance and Romantic eras, as well as contemporary music and improvisation. The group has been featured in various national radio broadcasts, appeared in international festivals and concerts, and collaborated with ensembles such as the Boston Early Music Festival Chamber Ensemble, and Ensemble Weser-Renaissance Bremen.  The Schola has recorded for the Arsis and Loft labels.
We asked Stephen for his thoughts as this tradition enters a 25th year:
When I founded the Schola Cantorum in 1997, I never imagined that it would have developed into an ensemble with such transformative impact through high-level music making. What grew out of a desire to teach others to perform Gregorian chant from medieval notation is now a performance laboratory where we experiment and grapple with performance practices of many styles of music.  These processes afford us choices that expand the expressive possibilities of our performance. 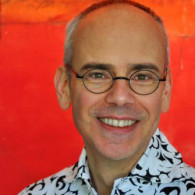 The Schola is presently comprised of singers, Renaissance sackbut players, an organist, and cornettist — all of whom get to perform to hundreds of people each week. We perform sacred chant, renaissance polyphony, romantic and contemporary works, choral improvisation within the ancient monastic office of Compline at Christ Church on Sunday nights at 9:00 p.m. (October-April).  Compline is performed entirely of music by candlelight. Members include Eastman and U of R faculty and students, RIT faculty, and Rochester-area musicians. Participation in the Schola is also offered for course credit at Eastman.

Members who have graduated from Eastman regularly let me know that Schola was one of the most important and fulfilling opportunities they encountered while in Rochester.  Former members are now freelance performers, composers, notable church musicians, and those who hold important teaching positions around the country.  We all look forward to Sunday nights when together we discover deeper hidden powers in music performance that transform us and those who experience our music making.
Every Sunday from October through April at 9:00 p.m. – Compline by the Christ Church Schola Cantorum, Stephen Kennedy, director
Candlelight Concerts precede Compline on first Sundays at 8:30 p.m.
Compline and Candlelight Concerts are supported by Christ Church “Friends of Music”
Categories: Eastman Journal, GeneralSeptember 30, 2022
Recent Posts
Blog Categories
Contact
Office of Communications 585.274.1050