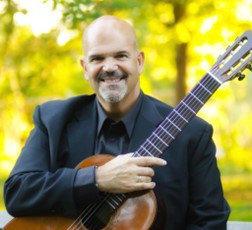 Nicholas Goluses will give a faculty recital on August 3, 2022 at 7:30 p.m. in Hatch Hall. He is Professor of Guitar, founder and director of the guitar programs at Eastman, where he is the recipient of the Eisenhart Award for Excellence in Teaching. His concert tours as soloist, with orchestra, and as chamber musician have taken him across North America, South America, Europe, Australia, and the Far East to critical acclaim.

Can you tell us about Wednesday night’s program and your upcoming solo album, Across the Horizon?

The idea for the record comes from my love of sailing, which I do a lot in the summer. When I was sailing on Lake Ontario, I was thinking about how we’ve all come through this pandemic. We’ve all been trying to figure out how to get back to life as we love it. I thought about that individual journey we’ve all had and, looking out at the horizon, thought about all the new worlds that sailors have seen in the past. The idea of music from the new worlds brought the repertoire choices together.

The second piece is Stele by the Australian composer Phillip Houghton. A stele is a Greek headstone or a monument that you see riddled all along the Mediterranean; it’s a kind of beacon to lost souls that have perished in the sea. According to the composer, this Stele is inspired by the perfume of the olive tree and the sounds of the water. Australia is a new world from my point of view, so I wanted to do something from Australia. I also liked the idea that Houghton was doing something Greek because of my heritage. The movements are Stele, Dervish, Bronze Apollo, and the last movement is called Web, which draws all of the themes together.

Fantasia was written for me by Bill Dobbins (recently retired director of the Eastman Jazz Ensemble). Bill has written a few pieces for me over the years, and I wanted a piece for solo guitar since I do solo concerts the most. People always say the cliché that if Bach or Mozart was alive, they’d be jazz musicians. Well, I think they’d be a jazz musician like Bill: a great pianist and a very, very good composer. It’s a little under ten minutes long and is a multi-section piece. An introduction is followed by a jazz waltz. Then there’s a cadenza followed by a Piazzolla-like middle section, which is stretchy and rubato, very rich harmonically. After another cadenza, it ends with an upbeat Rondo.

You know, loosening up to play Brazilian music is one thing, but to play this music, I had to figure out how to make it work; unlike Baroque music, in jazz music eighth notes are often played a little bit unevenly. There is a way to swing this music without going too far, because then it becomes a caricature of jazz. 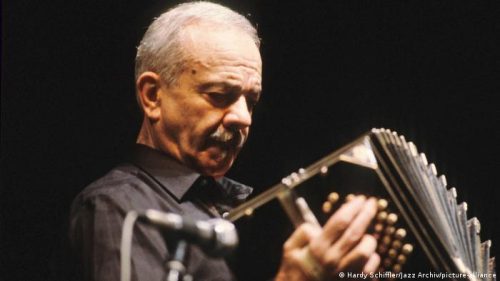 The last piece on the program is Cinco Piezas by the great Argentinian tango master, Astor Piazzolla. He went a little nuts for the guitar at the end of his life. He was a student of Nadia Boulanger like many great composers of the 20th century. While studying in Paris and at the end of their time together, she said to him, tell me a little bit about Buenos Aires. So he came for his last lesson with his Bandoneon. It’s an accordion-like instrument you often hear in tango music, very melancholy, very beautiful, and very unique. That was his instrument. He was the best. He plays her these tangos and she says, “Okay, you have to come back to Argentina now and you have to do for the tango what Chopin did for the mazurka.”

Boulanger was one of the greatest composition teachers of the 20th century, and she was very strict about voice leading, functional harmony, and counterpoint. Piazzolla applied all this to tangos and came up with a title, nuevo tango or “new tango.” He does go back, and starts writing all of these tangos with the knowledge that she gave him. Shortly before Piazzolla died, he wrote four pieces, masterworks really, in the span of two years. Cinco Piezas is the first of these pieces and it’s almost never played. A manuscript has surfaced and I’m working a lot with that.

How do you find a balance between teaching full-time and managing a successful and diverse solo career?

It’s a triple career. You have to record, you have to perform, and you have to teach. Each informs the other. I’ve played a few good concerts and I’ve made a few good records, but the honor of my professional life is my students. When you get older, you start to really see another horizon. You don’t really see that when you’re young; you’re just chasing music making. As a teacher, you plant these seeds in your students and then years later you see your them after they’ve graduated and after they’ve gotten a good job or won some competitions. These seeds you planted, they grew, they grew independently of you, but you still see them.

I know that there are very good teachers out there who don’t perform. I know that that’s true, but I personally find that my teaching is better when I’m performing, and my performing’s better when I’m recording, and my recording’s better when I’m performing. I think they all feed into each other. It sounds like three different things, but it really is one thing. The summertime is the time for me to record and learn new music. And during the school year for some reason my students expect lessons. So, I’m here during the school year, as much as I can be. I try to do most of my concerts in the summertime or during school breaks. 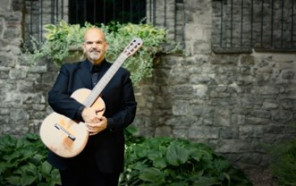 Is there anything else you would like to mention about your upcoming performance or projects?

I love playing and recording here in Hatch Hall; a couple of my CDs are recordings from Hatch. John Truebger knows how to get a great sound for me. He really pulls out his best stuff; it’s a pretty sophisticated microphone setup. It will be an awful lot of hardware up on stage just to record solo guitar. We’ll be set up at the concert, because we’ll actually see if we get some takes.

Guitarist Nicholas Goluses presents Across the Horizon this Wednesday, August 3, at 7:30 p.m. in Hatch Recital Hall. Tickets are $10. Click here for more information.