“The darkness of war and the hope of life”: Pianist Alexander Kobrin Performs Benefit Recital 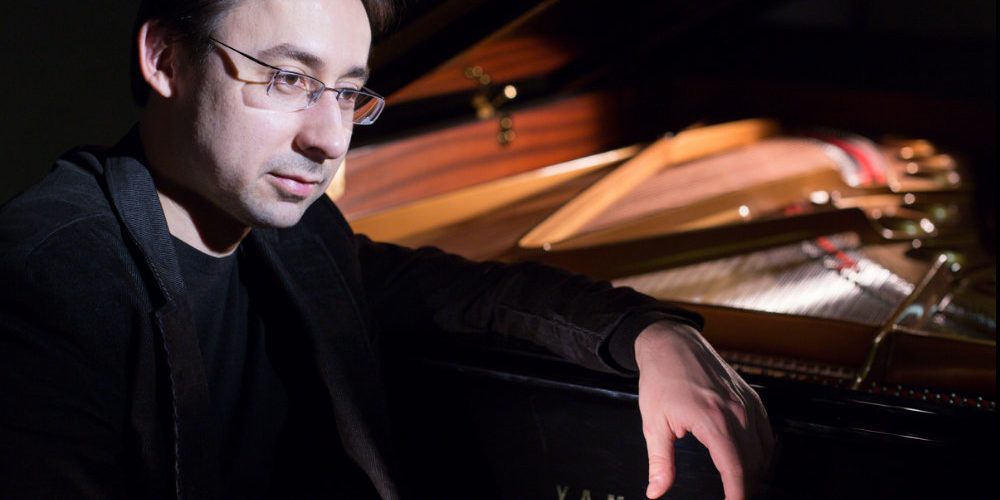 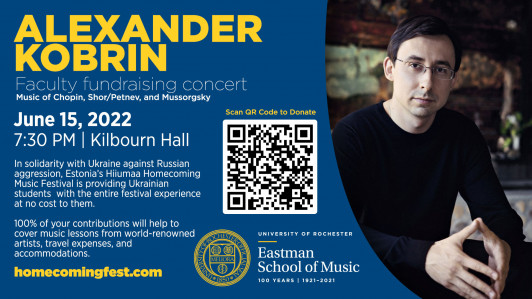 “To send light into the darkness of men’s hearts – such is the duty of the artist,” wrote the 19th-century composer Robert Schumann. To shed a bit of light during one of the darkest events of the 21st century, an Eastman professor will be presenting a recital this month to benefit displaced Ukrainian music students.

Associate Professor of Piano Alexander Kobrin, a Van Cliburn Competition winner who has performed throughout the world as a soloist and recitalist, will be in Rochester to give a faculty fundraising concert for Ukrainian students attending a summer music festival he co-directs, Estonia’s Hiiumaa Homecoming Music Festival.

His recital takes place Wednesday, June 15, at 7:30 p.m. in Kilbourn Hall and will include music by Chopin, the contemporary Ukrainian American composer Alexey Shor, and Mussorgsky.

Hiiumaa Homecoming Music Festival was founded in 2006 with the mission of promoting classical music and supporting young musicians’ dreams to pursue their careers at the highest possible level. The festival presents world-renowned musicians from more than fifteen countries on a beautiful island in Estonia. Besides Eastman’s presence with Kobrin, the schools represented include Tallinn Academy of Music, London Royal College and Guildhall School, and the Hague Conservatory, and members of the London Philharmonic, Hague Philharmonic, Haydn Orchestra di Bolzano.

This year, the Hiiumaa Homecoming Festival is scheduled to take place during the last week of July. In response to Russian aggression in the Ukraine, the festival is prioritizing invitations to displaced Ukrainian students who will take classes with guest artists and take part in festival performances. All of the funds raised through Kobrin’s recital will cover music lessons, travel expenses, and accommodations for the Ukrainian students, at no cost to them.

“We seek to provide solace and peace to young Ukrainian musicians through music and learning at our summer festival,” say Kobrin and festival founder Dmitriy Bulgakov. “Music has the power to bring peace in times of suffering, to bring hope to those in despair.

“At this time, many Ukrainians continue to suffer significantly as a result of the Russian invasion of their land. Due to this war, countless students have lost their homes and livelihoods. We seek to provide solace and peace to young Ukrainian musicians through music and learning at our summer festival.” 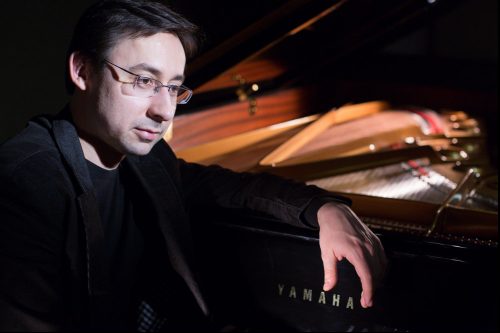 This recital, and this cause, have a powerful meaning for Alexander Kobrin, as he explained in a short interview.

How did the idea for the recital come about?

The idea of the recital came right after the war started. I dedicated all my performances this spring to Ukraine and its people who are going through unimaginable horrors. It was a natural impulse to try to do what I can do best in order to show my support. At the same time Hiiumaa Homecoming Festival decided to dedicate this coming edition to Ukraine by inviting students who had to run away from the war and are currently in different European countries trying to continue their music education.

Why is this benefit recital important to you personally?

My grandparents were from Ukraine, and I was born in Russia. For me it’s a personal tragedy, and I am not sure I would ever recover from this. My family is torn apart, family members are taking sides, and I think this is one of the horrors of war which we are going through not even being there. But of course, this is nothing compared to the actual war experiences of these young people, who are trying to continue to live a normal life without having a home.

What will you be performing?

The Chopin Fantasie is one of my favorite pieces. The Polish Chopin himself was a victim of Russian aggression, and I think his music corresponds very well with our reality.

Alexey Shor, a Ukrainian-American composer, wrote his sonata in collaboration with famous Russian pianist Michael Pletnev a year ago. Who knew then that the idea of Ukrainian and a Russian collaboration would be impossible just a very little time after? I think examples of such collaboration should be appreciated; we won’t see many of them in the near future.

I will conclude the program with Mussorgsky’s iconic Pictures at an Exhibition, which with all its darkness, death and life themes, and grand Finale depicting the Great Gates of Kiev, is a true reflection of the darkness of war and the hope of life.

Is there anyone else connected with the festival you would like to mention?

My colleague and friend, founder of the festival, Professor of Oboe in Estonian Academy Dmitry Bulgakov, whose efforts and vision help make this festival a place where I hope students from Ukraine, just for a moment, would be able to relax and dive into beautiful music making with world-renowned artists on the same stage. 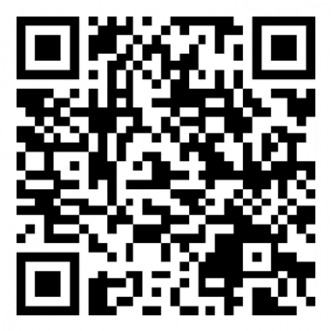 Alexander Kobrin will present a faculty fundraising concert for Hiiumaa Homecoming Music Festival on Wednesday, June 15 at 7:30 p.m. in Kilbourn Hall. Scan the QR Code at the top of this post, or to the left, to donate; it will also be available in the recital program. Here is the link to the donation page.