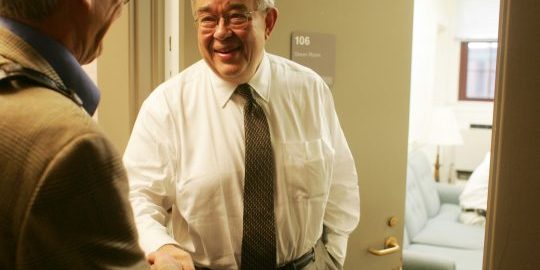 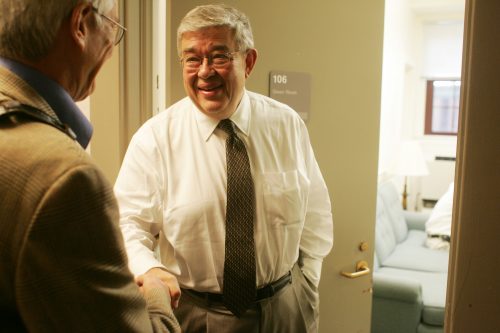 Robert Freeman, shown during a return engagement in 2006, whose “absolutely tireless” leadership and initiatives still resonate at our school.

Eastman’s School Historian, Vincent Lenti, recently published the third volume of his history of our school. In this excerpt from Nurturing the Love of Music: Robert Freeman and the Eastman School of Music (Meliora Press), Dr. Lenti sums the extent of Freeman’s ideas and influence, which profoundly changed the school’s faculty, administration, and campus, and created the Eastman we know today.

After twenty-three and a half years of leadership, Robert Freeman left his mark on the Eastman School of Music. He restructured the administration of the school and generally showed uncommonly good judgment in his selection of senior members of his administrative team. As such he surrounded himself with people with the expertise and personal loyalty necessary to support him in his leadership of the school. Freeman also helped to build and strengthen the Eastman faculty. He refocused both the theory and musicology departments, giving greater emphasis to research, scholarship, and publication without weakening the commitment to the teaching of undergraduate and graduate students. Throughout his years of leadership, the performance faculty also significantly gained in stature and prominence.

Policies governing tenure and promotion were regularized, procedures for evaluation of pre-tenured faculty were established, and annual awards in recognition of excellence of teaching were introduced. Faculty chairs were given more authority and responsibility, and a faculty-elected advisory committee to the director was formed. Regularly scheduled faculty meetings, as well as regular administrative staff meetings, encouraged the broadest possible participation of the entire Eastman community. The school’s admissions process was reorganized, with the result that, between 1974 and 1992, the school enjoyed a ninety percent increase in the number of submitted applications for degree study.

Freeman was constantly active in raising funds for Eastman. Nearing the end of his first five-year term as director, he was able to report that he had already raised more than $1.5 million in outside gifts, “a great deal more than had been previously raised in the first 50 years of the school’s history.” Throughout his lengthy tenure at the school, Freeman had understood his responsibility to raising funds in support of scholarships, faculty salaries, and the school’s ambitious building and renovation programs. He was absolutely tireless in his efforts in this regard.

Freeman’s most visible contribution to the Eastman School of Music were the new buildings constructed under his leadership. Eastman Place and the Student Living Center not only addressed critical needs of the school, but their construction did much to make the decision to keep the school in downtown Rochester a permanent one for at least the foreseeable future. Freeman was also the most effective and persistent advocate for the establishment of the cultural district, which successfully improved the area of the city in which the school and theater are located. The larger vision for downtown vitalization remains largely unfulfilled, especially with the later closing and demolition of Midtown Plaza, and this remains a challenge for the city, the school, and for the university. Nonetheless, by the end of Freeman’s tenure as director, the Eastman community found itself in a better neighborhood, thankfully rid of the rather unsavory businesses that had been part of the area prior to the establishment of the cultural district.

Robert Freeman led the Eastman School of Music for a period of twenty-three and a half years. The school he came to in 1973 was a troubled institution. Students had risen up in firm and united opposition to his predecessor, and faculty and student morale was perhaps at their lowest point in the history of the institution. Eastman was somewhat adrift, without a clear sense of its identity and its future. Freeman provided strong leadership, and his influence would be felt for many years after his departure. The faculty from the 1973‒74 academic year was largely gone, replaced by people who reflected the direction that Freeman had charted for the school’s future. Among the string faculty members teaching performance majors in 1973‒74, only two remained at the end of 1996. In piano and voice, there were also only two remaining in each of those departments. Only one person teaching musicology and music history in 1973‒74 remained on the faculty. In woodwinds, brass, and percussion, only one remained. The music education faculty in 1996 were all Freeman appointees. Excluding the humanities department, less than a dozen members of the 1973‒74 faculty were still teaching at the school when Freeman departed. The faculty of the school, therefore, was very much his creation. And it was an accomplishment for which he deserved much credit.

In all, Robert Freeman consistently spoke and acted in support and defense of the Eastman School of Music, its faculty and its students. He had been a strong leader with a vision for the future of the school, a vision that was focused on maintaining and enhancing Eastman’s reputation as one of the premiere music schools in the world. Robert Freeman left Rochester late in the fall of 1996 to become president-designate of the New England Conservatory of Music, and then served as president of that institution from 1997 to 1999. He next served as dean of the College of Fine Arts and Effie Marie Cain Regents Professor of Fine Arts at the University of Texas at Austin from 1999 until 2006. After retiring from his administrative position, he served as Susan Menefee Regan Regents Professor of Fine Arts from 2006 until 2015.

Nurturing the Love of Music, as well as the previous volumes in Vincent Lenti’s history of Eastman, For the Enrichment of Community Life and Serving a Great and Noble Art, are available from Eastman’s Barnes & Noble Bookstore. Email