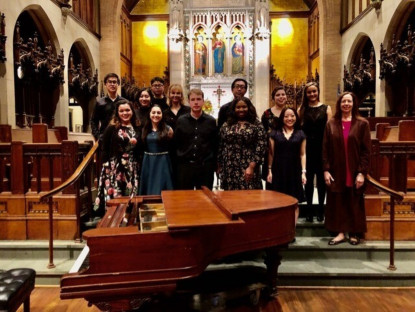 Eastman participants in a recent “If Music Be the Food…” concert at St. Paul’s Church. Photograph by Mimi Hwang.

“If Music Be the Food…,” the chamber music series benefiting Rochester’s Foodlink, will close its thirteenth season with a live concert on Sunday, April 3 at 7:30 p.m. from St. Paul’s Episcopal Church, 25 Westminster Road 14607.

The mission of “If Music Be the Food…” is to increase awareness and support food insecurity in the local community through the sharing of great music. Eastman faculty and students, members of the Rochester Philharmonic, other local professional musicians, and distinguished international guests donate their time and talents. During the 2018-19 season, IMBTF garnered $8,320; 100% of proceeds went directly to Foodlink.

IMBTF was founded by former Eastman faculty member Carol Rodland in 2009, and is now headed by Mimi Hwang, Assistant Professor of String Chamber Music. Peter DuBois, Director of Music at Third Presbyterian Church and Robert Poovey, Director of Music at St. Paul’s Episcopal Church, are musical and administrative partners in the series.

We interviewed ROCmusic’s Sean Mulligan ’18E about the concert and his work with his ROCmusic students, who have been preparing since mid-February.

Do the ROCmusic students often give public performances?

RocMusic regularly holds recitals at Hochstein and performs for various events around the community. We most recently performed for the Black History Gala, at Edgerton Recreation Center, in honor of Black History Month. Our teaching artists aim to instill the philosophy that performing is as much an important skill to practice as being able to play scales and arpeggios. We are constantly on the lookout for performance opportunities for our youth and invite collaboration with local organizations.

How long have you been involved with ROCmusic? How did you get started?

My colleague, Amanda Laborete, a talented cellist and fellow Eastman alum, first reached out to me regarding the possibility of teaching with ROCmusic during the summer of 2021. Shortly after, Dr. Armand Hall, our Artistic Director, offered me the opportunity to work with ROCmusic youth during their 2021 summer residency program, where we conceived this idea.

How did the idea for ROCmusic’s involvement in this concert come about?  How long have you been preparing?

While at Eastman, I studied viola with Carol Rodland. When Dr. Hall mentioned that our youth directly benefit from Food Link, an organization IMBTF aids, it seemed only apparent that we involve ROCmusic youth in the series. I reached out to Mimi Hwang, who is now the director of IMBTF, and she immediately agreed: why not show the community the profound influence their support has had over the years while allowing our youth performance experience, and the opportunity to give back. It’s a win-win for everyone!

How were the students chosen? Have they found the music challenging and interesting?

Our youth were chosen based on level and enthusiasm. Our group consists of some strong players, and players who, inspired by the opportunity to perform for their community, have really pushed themselves to meet the standard established by their peers.

Our faculty at RocMusic have had the privilege of witnessing as our students meet challenges such as learning notes, holding focus, and understanding new rhythmic structures, with dogged curiosity. Over the past month, our students have gone from stopping every few minutes to chat and self-practice during rehearsal, to staying overtime on their own accord to work out how to match bow articulation.”

Sean’s hardworking ROCmusic students agree: “I found it challenging keeping up with the pace of the music and some of the notes on the G string,” says ROCmusic student violinist A’nye Chandler. “The tempo of the music was interesting, and I learned how using more bow increased the sound on the violin.”

“I find challenging music more interesting to play. I feel it brings excitement,” says violinist Kayane Sim-Johnson, who is echoed by violist Estes Crony: “I have found the music challenging by the style and bowing of each note.”

As Estes sums it up: “Music is interesting because you can express it in so many different ways.”

“If Music Be the Food…,” the chamber music series benefiting Rochester’s Foodlink, will close its thirteenth season with a live concert on Sunday, April 3 at 7:30 p.m. from St. Paul’s Episcopal Church, 25 Westminster Road 14607.

Cash donations to Foodlink can be made through this link https://give.foodlinkny.org/ge/ifmusicbethefood or checks can be mailed directly to Foodlink with IMBTF in the memo line. Donations of non-perishable food items and cash will also be collected at the concert. For further information, please visit http://www.ifmusicbethefood.com and on Facebook.