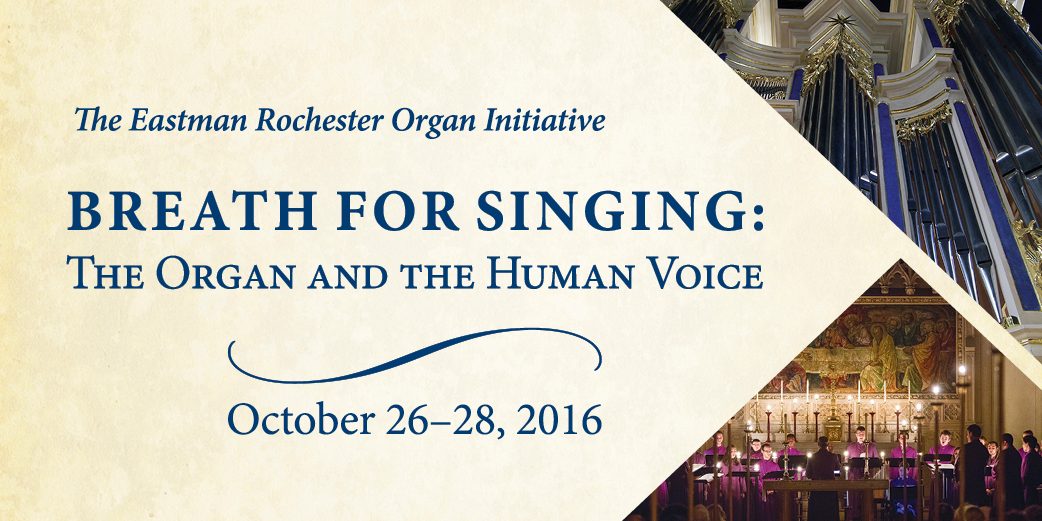 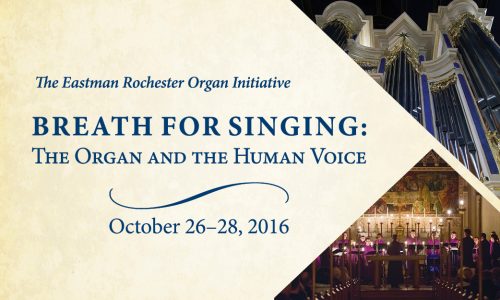 The 2016 EROI Festival explores the interaction between organ and voice and features several public concerts.

The 2016 EROI (Eastman Rochester Organ Initiative) Festival will explore historical, conceptual, and practical aspects of the interaction between organ and voice from Oct. 26 through 28 at the University of Rochester’s Eastman School of Music.

Titled “Breath for Singing: The Organ and the Human Voice,” the festival also features the premiere performance of a new hymn commissioned for the conference, with text by Yale theologian and poet Thomas Troeger and music by internationally recognized composer Nico Muhly, on the festival’s opening night, Wednesday, Oct. 26.

Full registration for “Breath for Singing: The Organ and the Human Voice” is currently closed, but tickets will be sold at the door for public concerts. For concert and ticket information, please visit https://www.esm.rochester.edu/organ/eroi/.

Festival attendees will have an opportunity to hear a wide range of organs across Rochester that represent historically diverse performance styles and settings. The 2016 festival will be the first to feature the Tannenberg organ at First Presbyterian Church in Pittsford. Built in 2008 by Taylor and Boody Organ Builders, this instrument reflects the construction and tonal design of the premier early American organ builder, David Tannenberg. These instruments were often installed in Moravian and German reformed churches, whose musical traditions proved unique in liturgical history.

Through lectures, demonstrations, master classes, and performances, leading organists and musicologists will examine the roles of the organ in supporting congregational singing and in alternating with the choir (schola cantorum or Kantorei) in religious communities. In addition to looking at congregational song from a historical perspective—examining repertories of chant, chorales, metrical psalms, and hymns—sessions will explore the cognitive and psychological benefits of group singing.

The keynote speaker is Robin Leaver, Professor Emeritus at Westminster Choir College and Visiting Professor at Yale University’s Institute of Sacred Music and at Queen’s University at Belfast. A hymn festival follows his remarks and will feature the premiere of the new hymn by Troeger and Muhly by the assembled audience and a chorus comprised of Rochester-area church choirs. Organists and conductors for the performances include James Bobb, assistant professor of music at St. Olaf College; Aaron David Miller, director of music at House of Hope Presbyterian Church in St. Paul, Minn.; and Peter DuBois, director of music at Third Presbyterian Church in Rochester and host of the nationally syndicated program With Heart and Voice.

The Eastman School established the EROI Festival in 2001 as a forum for scholarly dialogue and public performances relating to the pipe organ. An important mission of the festival is to promote the organ locally and nationally. Alongside regular festivals, EROI has facilitated the construction of historically diverse pipe organs throughout Rochester. These organs provide the basis for several year-round concert series, including community concerts that engage the public and provide students an opportunity to perform off campus.

2016 EROI Festival Breath for Singing: The Organ and the Human Voice. Recital on the Italian Baroque Organ by Eastman School of Music organ students and faculty.

2016 EROI Festival Breath for Singing: The Organ and the Human Voice. Hymn festival with organists James E. Bobb and Aaron David Miller, and a Festival Choir from Rochester-area churches conducted by Peter DuBois. Premiere of a new hymn by Thomas Troeger and Nico Muhly.

2016 EROI Festival Breath for Singing: The Organ and the Human Voice. David Higgs and William Porter of the Eastman School of Music play organ repertoire based on chorales, metrical psalms, and hymns, including congregational singing.