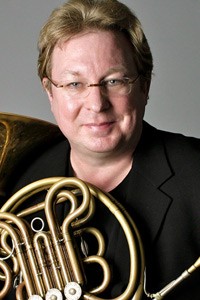 William VerMeulen, Principal Horn of the Houston Symphony and Professor of Horn at Rice University’s Shepherd School of Music, will conduct three residencies at the Eastman School of Music during the 2015-2016 academic year.

Called “one of today’s superstars of the international brass scene,” Professor VerMeulen has forged a career as soloist, chamber musician, master teacher, and music publisher. He has performed to critical acclaim on four continents and is a popular artist at International Horn Society Symposiums.

Professor VerMeulen will be at Eastman on Monday, Oct. 19, and Tuesday, Oct. 20, conducting master classes and lectures. His lectures at 10 a.m. and 1:30 p.m. Tuesday in the Ciminelli Formal Lounge are open to the public. He will in-residence at Eastman twice in spring 2016.

“I have known, respected, and admired Bill VerMeulen for over two decades, and I am delighted that he will be sharing his expertise, insights, and inspiration with the horn and brass students here at the Eastman School,” said W. Peter Kurau, Professor of Horn and Principal Horn of the Rochester Philharmonic Orchestra. “I look forward to a very fruitful and enjoyable collaboration, and offer my hearty congratulations on his appointment to the Eastman School.”

Professor VerMeulen has been Principal Horn of the Houston Symphony since 1990 and has performed as a guest Principal Horn of the Chicago Symphony, Los Angeles Philharmonic, Cincinnati Symphony, St. Louis Symphony, Pittsburgh Symphony and St. Paul Chamber Orchestra. He has been an Artist of the Chamber Music Society of Lincoln Center and participates as a performer and on faculty at such major music festivals as Aspen, Banff, Tanglewood, Sarasota, Steamboat Springs, Santa Fe, Orcas Island, and others.

Along with the dozens of orchestral recordings in his discography are numerous solo and chamber recordings, including the complete Mozart Horn Concerti with Christoph Eschenbach and the Houston Symphony and Texas Horns featuring the Dallas and Houston horn sections. Professor VerMeulen has recorded live the Brahms Trio op. 40, Mozart Quintet K. 407, Beethoven Septet, Ravel Tombeau de Couperin for wind quintet, Schubert Octet, Spohr Nonet, Ligeti Bagatelles and the Bach Brandenburg Concerto no. 1. A champion of new music, he has had numerous pieces written for him including concerti by Samuel Adler, Pierre Jalbert and Tony DiLorenzo and the horn cantata “Canticum Sacrum” by Robert Bradshaw.

Among his awards and honors, Professor VerMeulen received first prize at the 1980 International Horn Society Soloist Competition and the Shapiro Award for Most Outstanding Brass Player at the Tanglewood Festival. In 1985, he was a “Distinguished Teacher of America Certificate of Excellence” by President Reagan and the White House commission on Presidential Scholars at the White House.