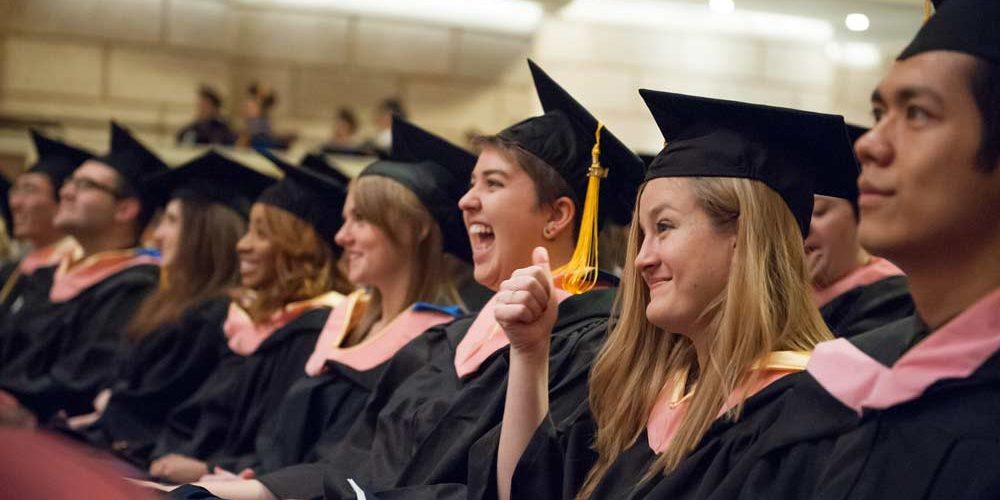 Paul Burgett, who received his undergraduate and graduate degrees at the University of Rochester’s Eastman School of Music, and now serves as University Vice President, Senior Advisor to the President Joel Seligman, and University Dean, will be the speaker for Eastman’s commencement on Sunday, May 17. Burgett will also receive the School’s Distinguished Alumni Award for his service to Eastman, the University, and the Greater Rochester community.

The Sunday commencement exercises, which start at 11:15 a.m. in Kodak Hall at Eastman Theatre, are for students receiving their bachelor’s and master’s degrees. The doctoral ceremony for students receiving a DMA or Ph.D. degree will be held at 9:30 a.m. Saturday, May 16, in Kodak Hall. During the doctoral ceremony, Professor of Musicology Ralph Locke will receive the University’s Lifetime Achievement Award in Graduate Education. Approximately 273 candidates will receive their undergraduate and graduate degrees during the School’s 90th annual commencement.

A native of St. Louis, Missouri, Burgett has lived in Rochester since 1964, when he came to study at the Eastman School of Music. He was awarded his bachelor’s degree in 1968, his master’s in 1972, and his Ph.D. in 1976. His doctoral dissertation treated the aesthetics of the music of Black Americans, a subject that continues to occupy him as a teacher and scholar in the music department of the University’s College of Arts & Sciences.

In his current roles, Burgett advises the president on University matters and represents the office among internal, alumni, and local community constituencies. He is an academic advisor to undergraduates and advises several student organizations. He gives lectures on University history locally and to alumni groups around the country. In October 2014, the University’s Board of Trustees honored his long service by naming the recently established Intercultural Center, the Paul J. Burgett Intercultural Center.

Burgett also has served as dean of students at Eastman; assistant professor of music at Nazareth College; executive director of the David Hochstein Memorial Music School (now known as the Hochstein School of Music & Dance), and music teacher in the Greece Central School District.

Burgett is a former chairman of the board of trustees of the Strong Museum, former chair of the City of Rochester’s Zoning Board of Appeals, and has served on the boards of directors of the Genesee Country Village and Museum, the Hillside Family of Agencies, the Arts and Cultural Council of Rochester, the YMCA of Greater Rochester, the United Way, the Urban League, the Hochstein Memorial Music School, and Young Audiences Inc. He currently serves on the international advisory board of the Center for Black Music Research at Columbia College Chicago, the Mt. Hope Family Center advisory board, and the Rochester Fringe Festival.

Locke is a recognized authority on music in 19th-century France and Italy and on the structures of musical life in the United States since 1860. In recent years he has focused on the relationship between music and concepts of the exotic as seen in opera and instrumental works. His four books include Music, Musicians, and the Saint Simonians, Cultivating Music in America: Woman Patrons and Activists since 1860 (co-editor Cyrilla Barr),and Musical Exoticism: Images and Reflections. The most recent, Music and the Exotic from the Renaissance to Mozart, has been praised as “magisterial” and as setting a “gold standard.”

Six of Locke’s articles have won the ASCAP-Deems Taylor Award for excellence in writing about music; another, on Verdi’s Aida, was granted the H. Colin Slim award in 2007 from the American Musicological Society. Eastman Studies in Music, the book series that Locke edits for the University of Rochester Press, has produced more than 120 titles since its founding in 1994, with topics ranging from medieval music to film scores.