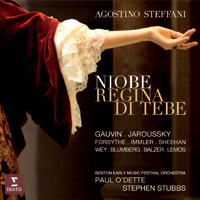 Professor O’Dette just returned from what he described as “an exhilarating seven-concert European tour” performing Agostino Steffani’s 1688 opera, Niobe. He conducted the Boston Early Music Festival and an all-star cast of nine singers, including the world-famous countertenor Philippe Jaroussky.

They performed Niobe in many of Europe’s top venues, including the Concertgebouw, Théatre des Champs-Elysees, Versailles, and the Spanish National Arts Center, to sold-out crowds of over 2000 people in each place. O’Dette described the Europeans as “absolutely ecstatic”, giving them standing ovations and four or five curtain calls at each venue. The ensemble will return for a second tour in 2017!

The CD of Niobe was released on January 15, to coincide with the tour and has already garnered four awards in its first two weeks of release, including Gramophone “Record of the Month”, Diapason D’Or, London Times “CD of the Week”, and Opera Magazine’s “Coup de Coeur.”

Not only was this tour a wonderful experience for Paul O’Dette; Eastman was well represented,with alumni John Thiessen and Brian Shaw on baroque trumpets and Beiliang Zhu on baroque cello, and Eastman faculty member Christel Thielmann on viola da gamba. According to Paul O’Dette, there is enormous enthusiasm for Baroque opera in Europe; the Niobe concerts outsold nearly all of the latest contemporary or traditional music projects. 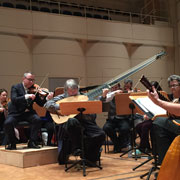