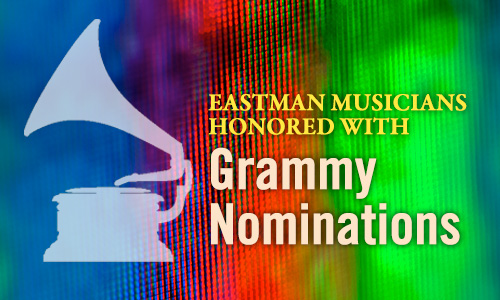 Paul O’Dette, professor of lute at the Eastman School of Music, and Eastman alumnus and mastering engineer Robert (Bob) Ludwig have received nominations in the 57th Annual Grammy Awards competition. Both are previous Grammy award winners.

This year, O’Dette is a nominee in the Best Opera Recording Category. Ludwig is in the running for three Grammys with a total of five nominations:  two each in the Album of the Year and in the Best Engineered Album Non-Classical categories, and a nomination for Best Surround Sound Album.

O’Dette won a Grammy Award in 1996 for a CD of Purcell songs with Sylvia McNair. He previously received Best Opera Recording nominations in 2008 for Lully: Psyche and in 2007 for Lully: Thésée. He also earned Grammy nominations in 2005 for conducting Conradi’s Ariadne and in 2006 for his solo lute CD Bacheler: The Bachelar’s Delight.

Charpentier: La Descente d’Orphée aux enfers has been earning international accolades. The CD has also been nominated in the International Classical Music Awards competition, was named a Gramophone magazine Editor’s Choice for September 2014, and was chosen as the July 2014 Recording of the Month by Musicweb International.

Ludwig is the recipient of two Latin and seven previous Grammys, including four last year for Album and Record of the Year, Best Historical Album, and Best Engineered Album Non-Classical. This year, he is up for his work on Beck’s Morning Phase and Pharrell Williams’s Girl, which are competing for Album of the Year. Ludwig is also the mastering engineer on the albums Bass & Mandolin and Morning Phase, which are nominees for Best Engineered Album Non-Classical. In the Best Surround Sound Album category, he is up for his work on Beyoncé.

Ludwig received his bachelor’s in music in education in 1966 and was awarded a master’s degree in trumpet in 2001. He worked at A&R Recording, Sterling Sound, and Masterdisk Corporation before opening up his own business, Gateway Mastering Studios, Inc., in 1993.

A respected figure in the music industry, Ludwig has worked on projects for such artists as The Band, Jimi Hendrix, U2, Barbra Streisand, Neil Diamond, and many more. He has won numerous (TEC) Technical Excellence and Creativity Awards, mastered numerous Gold and Platinum Awards, and is in demand as a panelist and speaker at universities and professional organizations.

The winners of the 57th Annual GRAMMY Awards will be announced Feb. 8, 2015, at Staples Center in Los Angeles.