Triumph of the Beastmen 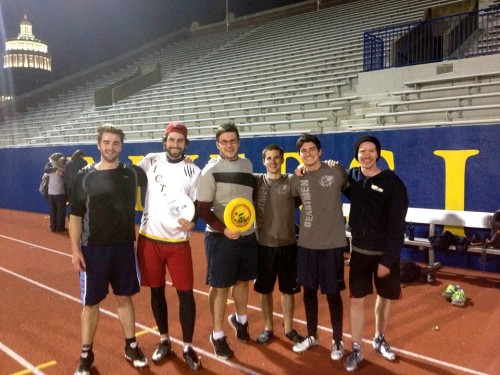 Eastman’s Ultimate Frisbee team, the Beastmen, is not very well known. We are just a small group of friends who get together on Sunday nights and throw a Frisbee around. I came to Eastman in 2011 and joined a decrepit team. People often didn’t show up and we’d have to forfeit the game; other players had so little strategy that on the field our team looked like chickens with their heads cut off. Every year we would do marginally well, make it to the playoffs of the University of Rochester Intramural League, and get swamped by the club team. Then we’d go home with our heads held high, saying “Till next time.” The next year all that changed.

In my sophomore year, everyone wanted to play Frisbee, but no one wanted to captain the team, so I put my hat in the ring. I was able to recruit a few really good players (far better than I’ll ever be) and we finally had a team that could compete. Every season since my sophomore year, we won every regular season game; however, the problem persisted. Every playoff season we would get to the championship game, and inevitably be destroyed by the club team..

This year, fate finally set us on the right track. We had a smaller team of devoted individuals who were also great players. It was much easier to put together strings of solid wins with just a few people who would show up every week. When we got to the championship game we were ready. It was a freezing night and there were only six players on our team versus their team of seven, but we persevered.  They got the first point but by the half we were up 4-1. We came back with confidence, but they were able to tie it at 6-6. For a brief moment, it looked as if we would never win a championship, but we rallied, coming back with three straight points to beat our opponents 9-6. After four years of disappointment at the end of every season, we were finally able to put together a win. We were euphoric!

I always said that the Frisbee team was a great way to let out some steam before the long week at Eastman. It felt good to know six nerds from Eastman who do music all day were able to beat a few athletes from UR. We’ll be talking about that win for a long time! It just goes to show you that the focus and discipline instilled by playing in an ensemble can translate to good teamwork anywhere. Thanks, Eastman, for teaching us to be a good Frisbee team; we never knew what hit us!