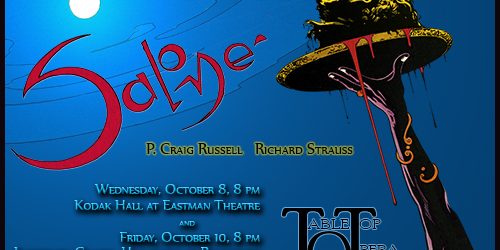 To most of us, Salomé is a salacious symbol of sexual excess. But that wasn’t always the case. A striking new production combines the illustrations of famed comic-book artist P. Craig Russell with music to tell the biblical story of a beautiful and sensuous young dancer. Russell’s evocative graphic novel, based on Richard Strauss’s opera Salomé, will be accompanied by a reworked instrumental rendition of the opera in presentations at the University of Rochester and its Eastman School of Music next month.

“Salomé” will be performed by Table Top Opera, a chamber ensemble of Eastman faculty, alumni, and friends, at 8 p.m. Wednesday, Oct. 8, in Kodak Hall at Eastman Theatre, and at 8 p.m. Friday, Oct. 10, in the Interfaith Chapel on the River Campus. This new production replaces singers and a symphony orchestra with a mixed ensemble of jazz and classical instruments. The music is paired with Russell’s pictures, which will be projected above the musicians during the performance, and a newly choreographed version of Salomé’s “Dance of the Seven Veils.”

The presentations are part of “The Veils of Salomé” funded by the University’s Humanities Project, which brings together scholars and performers from the Eastman School of Music and the University to explore the different depictions of Salomé in religion, the arts, and gender over the centuries. The project features a symposium along with the opera performances.

“By combining opera with comic books and classical players with jazz musicians, these performances will let listeners experience the music in a radically different way,” said Professor of Music Theory Matthew Brown. Brown is one of the producers of “The Veils of Salomé” project and founder of Table Top Opera. “With luck, our concert production will also encourage the audience to take another look at Salomé and other operas.”

In the New Testament, Salomé is not identified by name, but simply as the daughter of Herodias, the wife of King Herod. When the girl’s dance pleases the king, he promises her anything she wants. Prodded by her mother, the girl asks for the head of John the Baptist, who had condemned Herodias and Herod for their unlawful marriage.

The ancient Jewish historian Flavius Josephus also recounted the story, naming the young girl Shalome. Over the centuries, Salomé came to represent the dangers of the life of the flesh as opposed to John the Baptist’s life of the Holy Spirit, and was depicted as an alluring, lustful, and dangerous female.

“The Dance of the Seven Veils” is choreographed and directed by Betty Jenkins and features Leanne Rinelli as Salomé; Deirdre Towers as Herodias, and Carlos R.A. Jones as Herod.

A video trailer about “Salomé,” featuring illustrations from Russell’s comic book, can be seen at http://www.youtube.com/watch?v=YRMOBtu1A_g