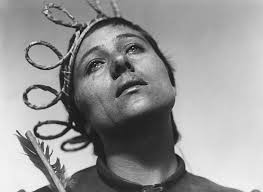 Eastman musicians provide accompaniment for silent movies not just on DVD soundtracks, like Donald Hunsberger (see the Hunchback of Notre Dame posting before this one), but also live. This Thursday, April 10, Carl Theodor Dreyer’s landmark film The Passion of Joan of Arc (1928), considered one of the great works of silent cinema, will be presented at Rochester’s Christ Church, 141 East Avenue. (Actress Renee Jeanne Falconetti, who gave an acclaimed performance as Joan, is shown above.)  The music for the film will be improvised on the spot by Associate Professor Edoardo Bellotti at the organ, with the Christ Church Schola Cantorum directed by Stephen Kennedy. Read here for more details.