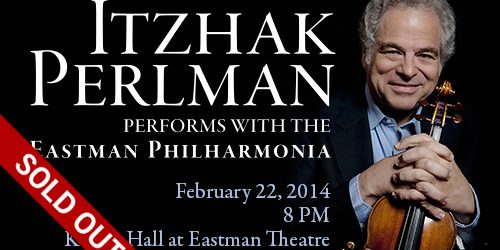 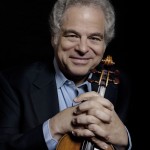 Violin virtuoso and classical music icon Itzhak Perlman will perform with the Eastman School of Music’s Philharmonia orchestra under conductor Neil Varon on Saturday, Feb. 22, 2014,  at 8 p.m. in Kodak Hall at Eastman Theatre.

Beloved for his charm and humanity as well as his remarkable artistry, Perlman has appeared with every major orchestra and in major concert halls around the globe. At Eastman, he will join the Philharmonia for the Violin Concerto No. 1 in G Minor by Max Bruch; the program also includes Antonin Dvorak’s “Carnival” overture and Johannes Brahms’s Symphony No. 4.

Born in Israel in 1945, Perlman catapulted to national recognition in the United States when he appeared on the Ed Sullivan Show in 1958. Following studies at the Juilliard School, he won the prestigious Leventritt Competition in 1964 and launched a worldwide career that has earned him 15 Grammy Awards for his recordings and a Grammy Lifetime Achievement Award. He is a recipient of the Medal of Liberty and the National Medal of Arts and is a Kennedy Center Honoree. Perlman has had a long association with the Israel Philharmonic as a conductor and has participated in many tours with the orchestra, including its first performances in Eastern bloc countries, China, and India.

On television, Perlman has appeared not only in PBS performance and documentary specials and series such as Live From Lincoln Center, but on such popular shows as The Late Show with David Letterman, Sesame Street, The Frugal Gourmet, The Tonight Show, and various Grammy Awards telecasts. He collaborated with film composer John Williams in Steve Spielberg’s Academy Award-winning film Schindler’s List, in which he performed the violin solos, and can also be heard as the violin soloist on the films Hero and Memoirs of a Geisha.

Perlman is actively involved in music education and has taught full-time at The Perlman Music Program each summer since its founding in 1993. He currently holds the Dorothy Richard Starling Foundation Chair at the Juilliard School, where he has been on the faculty since 1999.

Perlman’s performance at the Eastman School of Music is part of his 2013-2014 season that includes soloist performances with the Cleveland Orchestra and Toronto Symphony and an eight-city recital tour of Asia.

As a student at the Juilliard School, Varon was 18 when he met Perlman; the violinist played a Beethoven concerto for the conducting class. “I hope that his being here will motivate the students both as soloists and as orchestral musicians,” said Varon. “He is such a fabulous musician who places artistic content at the highest level and lets his superb technique serve that content.”

Varon was the first Kapellmeister of the Deutsche Opera am Rhein in Dusseldorf and served as the music director of the Südwestfälische Philharmonic and the City of Gelsenkirchen, Germany. As a guest conductor, he has conducted at the New York City Opera, Hamburg State Opera, Stuttgart State Opera, and Berlin Stattsoper, and continues to conduct throughout Europe and Asia.

A frequent guest in Asia, Varon led the Tokyo Philharmonic in a series of performances of The Magic Flute for the anniversary Mozart Festival in Japan. He conducted the Korean Symphony in Seoul, the Yomiuri Nippon Symphony in Tokyo, and the Kyushu Philharmonic in Fukuoka.

Varon made his conducting debut with the Rochester Philharmonic Orchestra in 2011. Most recently he conducted the RPO in the ensemble’s “Exquisite Puccini” and “Music from Italy” concerts in March 2013. He will conduct the orchestra in a program of Mozart and Tchaikovsky at Ithaca College in April 2014.

The Eastman Philharmonia’s most recent concert was a moving presentation of Mahler’s Symphony No. 2 “Resurrection” with the Eastman-Rochester Chorus, which was dedicated to the memory of Douglas Lowry, the Joan and Martin Messinger Dean of the Eastman School of Music who died Oct. 2. The Philharmonia’s next concert on Monday, Nov. 11, features Richard Strauss’s grandiose Alpine Symphony, a tone-poem depicting a day’s hike in the Bavarian Alps.