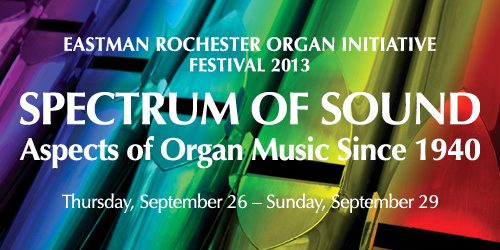 From September 26 to 29, the Eastman School of Music at the University of Rochester presents the Eastman Rochester Organ Initiative (EROI) Festival, “Spectrum of Sound: Aspects of Organ Music since 1940.” For the first time in its 12-year history, this annual celebration of all things organ will be devoted to music of our time, with talks, workshops, master classes, and performances by world-renowned artists and scholars.

“Since Ligeti’s seminal work Volumina, which revolutionized the world of organ music, composers have been exploring the organ’s full range of sound capabilities,” said David Higgs, chair of the Organ, Sacred Music, and Historical Keyboards Department.  “The festival program will examine the ‘spectrum of sound’ that differentiates contemporary organ music from the works written by earlier composers.”

William Bolcom, whose accolades include Musical America’s Composer of the Year, a Pulitzer Prize, and multiple Grammy Awards, will be on hand in his 75th-birthday year to teach a master class, discuss his approach to composing for organ, and hear his music performed. Other highlights include a keynote address and performance by Hans-Ola Ericsson and the final round of the Westfield International Organ Competition (Sep 28) with the Winners’ Recital at Cornell University on the last day of the festival.

“We’re  thrilled to have William Bolcom join us and share his thoughts on organ composition,” said Higgs. “The lineup of performers and speakers represents some of the world’s finest performers and scholars of contemporary organ music.”

On September 28, Bolcom, a prolific composer who makes an “indelible impression” (New York Times), will grace the stage of the historic Asbury First United Methodist Church to teach a masterclass that promises to be both enlightening and inspiring, as does his September 27 talk, titled Confessions of a Non-Organist. Eastman professors David Higgs and Nathan Laube, along with Aaron James and Douglas Reed, will perform a concert devoted to music by Bolcom and William Albright on September 27, and Bolcom’s Humoresk will be performed the following night at Rochester’s Third Presbyterian Church.

Bolcom received the Pulitzer Prize in 1988 for his 12 Etudes for piano, and his innovative musical interpretation of William Blake’s Songs of Innocence and of Experience won him multiple Grammys and Musical America’s Composer of the Year in 2007. He has an impressive catalog of cabaret songs, concertos, sonatas, operas, symphonies, and organ works, including his Twelve Gospel Preludes for Organ.

“Spectrum of Sound” will also honor the work of Anton Heiller, who would have celebrated his 90th birthday this year, with presentations and masterclasses featuring his music. Heiller’s protégé, Austrian organist and composer Peter Planyavsky, will teach a masterclass with Christa Rakich on Heiller and Hindemith’s organ works (Sep 27). Additional performances will cover works by Messiaen, Ligeti, Cage, and a world premiere by Michael Pelzel.

Hans-Ola Ericsson will deliver the keynote address, Is There a Future for New Sounds? The Organ as a Tool for the Twenty-first Century, on September 26, and he will perform in recital on September 28. Ericsson, who is Head of the Organ Department at McGill University, has recorded Messiaen’s complete organ works for BIS and an album of music by Ives, Copland, Cage, and Feldman.

Since the EROI festival will coincide with the last three days of the First Niagara Rochester Fringe Festival (Sep 19-28), attendees have the opportunity to see Fringe shows held at nearby Christ Church. Two of those Christ Church events are part of both Fringe and EROI. On September 26, organist and composer Martin Herchenröder will perform Rhythm and Color: Organ Music from 1952–2012, which features works by Messiaen, Ligeti, Cage, and a world premiere by Michael Pelzel. Then, on September 28, Eastman faculty member Stephen Kennedy performs “chilling” organ music (Rochester City Newspaper) in Spirits Within, an arresting multimedia collaboration with projections by Rochester Institute of Technology professor Marla Schweppe.

The festival includes the final round of the Westfield International Organ Competition (Sep 28) and subsequent Winners’ Recital (Sep 29). Three organists who made it through the first two rounds of competition will perform in the final round on September 28, with prizes announced that evening. The festival will close with all three finalists performing in the Winners’ Recital on September 29.

Among the performers at the festival will be two new Eastman faculty members in the organ department chaired by David Higgs: Nathan Laube and Edoardo Bellotti. Laube, who is in his mid-twenties, has already been heralded as “a major artist on his instrument” (Time Out Chicago), delighting audiences throughout the United States and Europe. Bellotti is an internationally acclaimed performer, improviser, scholar, editor, and teacher. This will be Laube and Bellotti’s first EROI Festival as faculty, and EROI provides the opportunity to showcase their talents.

Three paper sessions round out the festival. In the first session, Andrew Shenton discusses Messiaen; William Bolcom explores Confessions of a Non-Organist; and Amy Bauer outlines her work on Ligeti. Hans Davidsson will also give a workshop on the performance of Ligeti’s Volumina. In the second session, Peter Planyavsky presents on the works of Hindemith and Heiller, and Mark Steinbach reveals Heiller Variations: Posthumous Discoveries.  In the final paper session, Lars Gjerde contextualizes Egil Hovland’s Elementa pro Organo, and Randall Harlow discusses Hyperorgan: Augmented Reality, Affordances and the Ecology of the Wondrous Machine.