Douglas Lowry Steps Down as Dean amid Honors 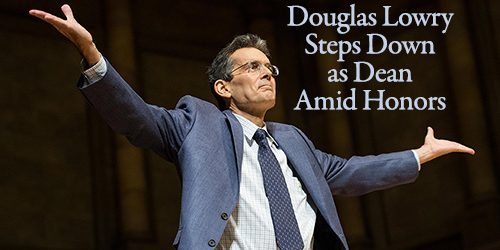 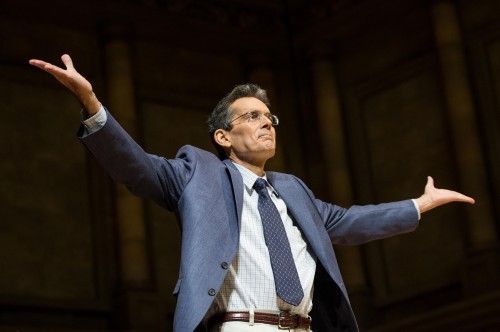 Eastman School of Music Dean Douglas Lowry acknowledges the audience during an announcement that he will be stepping down as dean due to health reasons during a ceremony in Kodak Hall September 23, 2013. Lowry will receive an honorary degree and be appointed dean emeritus; Rossi will serve as dean during the search for a replacement. // photo by J. Adam Fenster / University of Rochester

Douglas Lowry, the Joan and Martin Messinger Dean of the Eastman School of Music at the University of Rochester, has resigned for health reasons.

The Board of Trustees named him the Joan and Martin Messinger Dean Emeritus and awarded him an honorary Doctor of Music degree, which was presented to him September 23.

“Doug has been an extraordinary leader of the Eastman School,” said President Joel Seligman. “His legacy as the dean who led the School into the modernized Eastman Theatre, as a gifted composer and an accomplished musician who was an inspiration to Eastman’s faculty and students is now part of Eastman’s storied history.”

“Doug has been a visionary leader in a time of great change,” said Provost Peter Lennie. “As a composer who understands and values scholarship, he has inspired a powerful sense of community within the Eastman School.”

Jamal Rossi, executive associate dean, will serve as dean until the conclusion of a national search.

Lowry, 62, became the sixth head of the Eastman School in 2007. He was named the first Joan and Martin Messinger Dean in 2011 and was reappointed in May 2013.

Lowry led the biggest architectural transformation in the Eastman School’s history, the renovation of Kodak Hall at Eastman Theatre and the construction of the east wing, with state-of-the-art performance, rehearsal and teaching spaces, including Hatch Recital Hall.

As a composer, Lowry’s works have been commissioned and premiered by the Rochester Philharmonic Orchestra (his “Geo” opened Kodak Hall at Eastman Theatre under the baton of Christopher Seaman in October of 2009), the Cincinnati Symphony, the Louisville Orchestra, the Eastman School Symphony, the Eastman Wind Ensemble, the Thornton USC Symphony, and others. He has composed incidental music for the St. Louis Repertory Theater and Cincinnati Playhouse, and written for a wide variety of other media. His “Suburban Measures” for Trumpet and Organ was recorded on the BIS label by Anthony Plog and Hans Ola-Erikkson, organ. His “Blue Mazda,” a cabaret song cycle for soprano, trumpets, piano and percussion, was recorded on the Summit label with the Freiburg Trumpet Ensemble and soprano Maria Cecilia Bengssohn. He has composed for Music from Angel Fire and other distinguished chamber music organizations.  One of his most recent commissions, “The Polite Abductress” was the highlight of an April event in honor of the Memorial Art Gallery’s 100th anniversary.

“Doug Lowry is not only an inspirational leader, he is first and foremost a remarkable musician,” said Jamal Rossi.  “His capacity to lead the Eastman School of Music while continuing to be an active composer grounds his vision for the future of music with tremendous substance and musical credibility.”

Lowry received a bachelor of music degree in theory and composition in 1974 from the University of Arizona and master’s degrees from the University of Southern California in trombone performance in 1976 and in orchestral conducting in 1978. He serves on the board of the Rochester Philharmonic Orchestra, the executive committee of the National Association of Schools of Music, and the board and artistic directorate of the American Classical Music Hall of Fame.

An active saxophone soloist and chamber musician, Rossi is featured on numerous recordings, and he has commissioned or premiered more than 15 compositions. He has been a soloist with symphony orchestras and military bands and has performed on the Columbia Artists Community Concert Association roster. His articles and reviews have appeared in leading wind publications. A founding member of the Kilbourn Saxophone Quartet, Rossi was formerly a member of the Carolina and Empire saxophone quartets.

Rossi holds degrees from Ithaca College, the University of Michigan, and the Eastman School of Music.