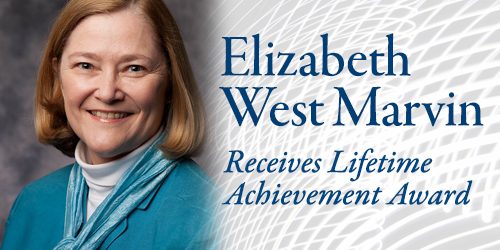 Elizabeth West Marvin, Professor of Music Theory at the Eastman School of Music, has received the Gail Boyd de Stwolinski Prize for Lifetime Achievement in Music Theory Teaching and Scholarship. Presented every two years by the Gail Boyd de Stwolinski Center for Music Pedagogy at the University of Oklahoma, the award recognizes outstanding pedagogical contributions in the discipline.

Among previous winners of the de Stwolinski prize are two former members of Eastman’s Music Theory faculty, Robert Gauldin and Dorothy Payne, and alumnus Bruce Benward.  To highlight the prize winner’s influence on the field of music theory, two of Marvin’s former students will be commissioned to write articles for the Journal of Music Theory Pedagogy.

In announcing the prize at the Society for Music Theory’s annual meeting earlier this month, Professor of Music Theory and Journal of Music Theory Pedagogy editor Steven Laitz described Marvin as an indisputable powerhouse in the classroom and a generous mentor to students and colleagues, noting that her work has had a significant impact on the field. “This versatile pedagogue has contributed illuminating publications to diverse sub-specialties of our field,” said Laitz. “Together with co-authors, our recipient has helped to re-shape music theory pedagogy by crafting influential undergraduate textbooks that raise the bar for all subsequent contributions.”

In 2011, she was the recipient of the University of Rochester Provost’s Multidisciplinary Award for “Perception of Music and Language through Auditory Interference,” with Joyce McDonough of Linguistics and Anne Luebke of Biomedical Engineering. In the same year, she was Visiting Researcher at the Orpheus Institute in Ghent, Belgium, where she completed a collaborative research study on statistical learning of absolute pitch with Elissa Newport of Brain & Cognitive Sciences. In 2005, she received a University of Rochester Bridging Fellowship, during which time these collaborations began.

In 2003, Marvin completed her term as national President of the Society for Music Theory, which she served previously as member of the Executive Board, Editorial Board, Newsletter editor, and committee member. She is also former President and Vice President of the Music Theory Society of New York State.