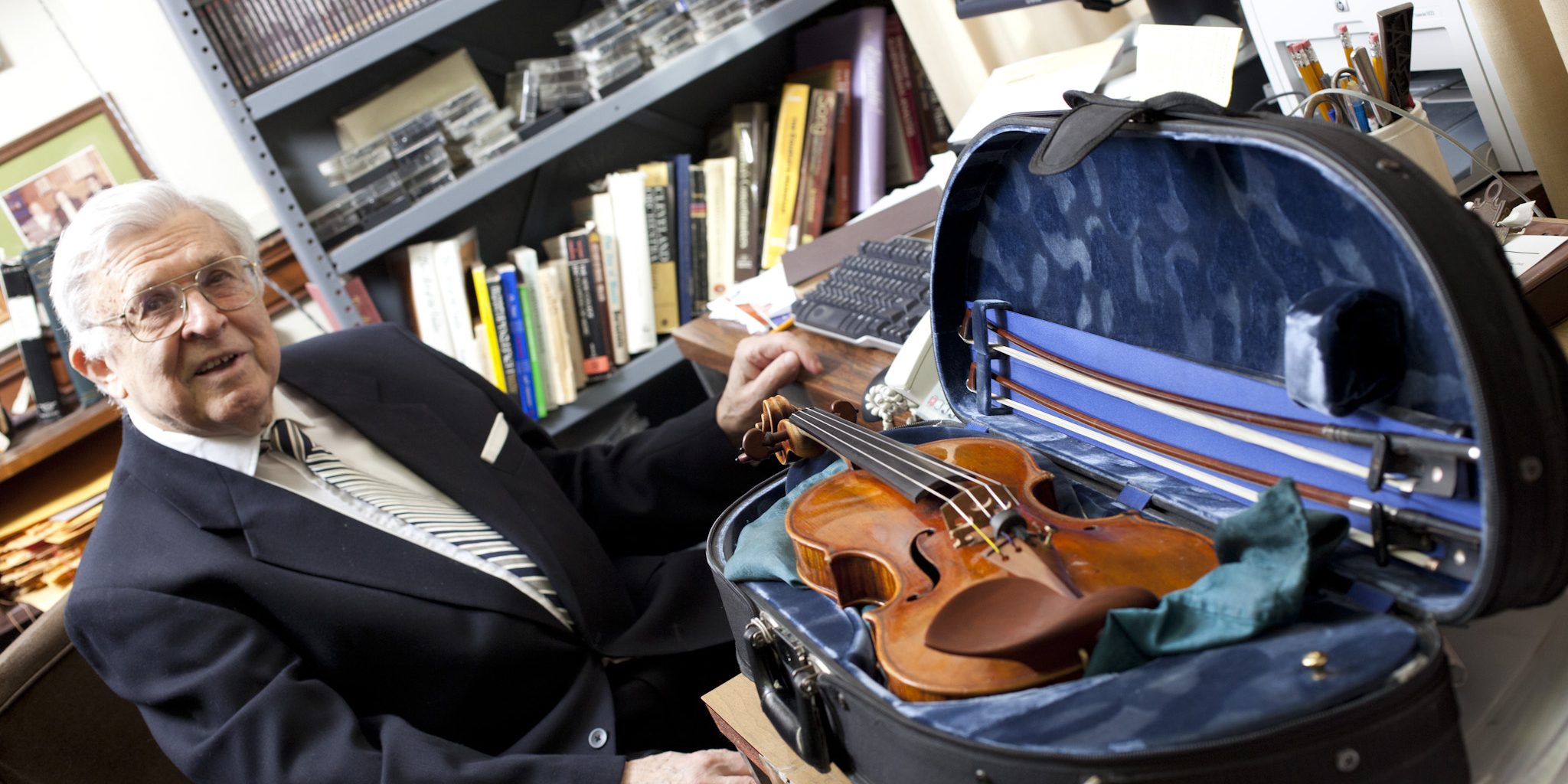 On the walls of Zvi Zeitlin’s studio in the University of Rochester’s Eastman School of Music is a photographic who’s who of famous musicians. Over the course of his illustrious career, the violinist has performed with and cemented friendships with some of the greatest artists of the 20th century.

“(Violinist Itzhak) Perlman sends me a photo every year of his growing family,” Zeitlin noted, pointing out a compilation of snapshots of Perlman’s children and grandchildren. Another picture shows composer Aaron Copland and Zeitlin sitting together in Zeitlin’s home. A photo taken in Tel Aviv during an Israel Philharmonic rehearsal shows Igor Stravinsky – who said of Zeitlin that “his gifts deserve the widest recognition” – discussing his score with the violinist.

There are many more, including a shot of Zeitlin with composer-conductor Serge Koussevitzky in Tanglewood in 1950; in a concert tour under composer-conductor Gunther Schuller; on the Carnegie Hall stage with Olga Koussevitzky and then-Israeli ambassador to the United States Abba Eban, when Zeitlin received an award for his musical contributions and service to both countries; and a photo and letter from Yehudi Menuhin. In a prime location on the wall are two pictures: one of Zeitlin with conductor Leonard Bernstein and one with cellist Pablo Casals, both of whom played major roles in helping to launch his career in his early days.  There are snapshots of some of the hundreds of students he’s taught, many of whom hold leading positions in orchestras, chamber groups, and universities around the globe.

In a career full of milestones, Zeitlin will mark yet another. On the eve of his 90th birthday (on Feb. 21), he will give a full recital, a feat which few violinists have attempted beyond their seventies. The program of Schubert works, which will be presented at 3 p.m. Sunday, Feb. 19, in Eastman’s Kilbourn Hall, marks his “Farewell Faculty Recital” prior to retiring after 45 years of teaching at the School. He’ll be joined by fellow Eastman faculty member Barry Snyder, piano, and a quartet of Eastman students.

Asked to share some words about his friend for the occasion, Perlman wrote, “Dear Zvi, Your insatiable intellectual curiosity has always played a major part in your life and made you the wonderful musician and teacher that you are. Congratulations on all the years of great music making and giving back to your students. Teaching is a mitzvah and you are fulfilling it and will continue to do so I am sure. Mazal Tov.”

Said Douglas Lowry, the Joan and Martin Messinger Dean of the Eastman School of Music, “Throughout Zvi Zeitlin’s remarkable career, he has exemplified the highest standards of artistry and teaching. His deep knowledge of violin playing has been informed by not only his insightful powers of observation and musicianship, but his being a force in these evolving traditions. The impact of his teaching is evidenced by the many former students who occupy some of the most prestigious musical posts throughout the world.”

Extensive Performance, Teaching Activities
Zeitlin’s resume spans almost eight decades. At age 11, he became the youngest scholarship student in the history of the Juilliard School. When he was 80, the Toronto Star hailed him as “one of the violin world’s grand old men, a true musical Methuselah.” He has performed with most of the great orchestras of the world under such conductors as Leonard Bernstein, Zubin Mehta, Christoph von Dohnanyi, James Levine, Pierre Boulez, Lorin Maazel, Rafael Kubelik, Jascha Horenstein, Antal Dorati, and many others. He has frequently toured Europe, Australia, New Zealand, Hong Kong, and Latin America. The New York Times described one of Zeitlin’s concerts as an “aristocratically romantic performance transformed into universal truth and beauty,” while the London Times wrote he displayed “a superlative exhibition of violin playing, a remarkable example of how an absolutely assured technique can be put to the service of the music in question.”

Among the world premieres Zeitlin has given are the concerti of Gunther Schuller, Paul Ben Haim, and Carlos Surinach – all of which were commissioned for him, by the Eastman School, Israel Philharmonic, and Music Academy of the West, respectively. His discography includes all of Stravinsky’s violin and piano works, the Schoenberg Concerto, and American composers such as Samuel Adler, Aaron Copland, Jacob Druckman, Lukas Foss, Verne Reynolds, and George Rochberg.

Zeitlin’s pedagogical activities are as expansive as his concertizing. In 1967, he was invited to join the faculty of Eastman by the School’s director, Walter Hendl, a conductor with whom Zeitlin had performed. In the ensuing years, he was named the School’s first Kilbourn Professor in 1974 and Distinguished Professor of Violin in 1998. In 2004, he received the University of Rochester’s Edward Peck Curtis Award for Excellence in Undergraduate Teaching.

In addition, Zeitlin has been on the faculty of the Music Academy of the West since 1973. He holds annual master classes in Great Britain at the Royal Academy of Music, Guildhall School of Music and Drama, and Yehudi Menuhin School. He has taught in Japan, Korea, China, Israel, Germany, Norway, and throughout the United States and Canada.

Zeitlin’s former students include San Diego Symphony Concertmaster Jeff Thayer, who stated, “I consider him to be responsible, in great part, for who I am today as a musician and human being. I cannot imagine getting the kind of dedication that he gave to me and to his other students from many other people.  He is one of the great artists of his generation, and I know that every violinist who spent time in his studio would acknowledge that.” Recollecting his studies with Zeitlin, Thayer said, “I fondly recall sitting for hours in his studio, just listening to the great old violinists in his wonderful LP collection. This was an education in itself. In addition, he educated us with stories and bits of information from his vast experience and connection to the older generations of musicians.”

Thayer is now also a colleague of Zeitlin’s at the Music Academy of the West, where he once told his former teacher about an upcoming performance of the Goldmark Violin Concerto.  “It was he who introduced this piece to me when I was studying with him at Eastman,” Thayer said. “He proceeded to pick up his violin and play through the entire first movement from memory. I don’t know many minds as great as his – this is just one example of his genius.”

Former student Catherine Van Hoesen, who has played in the first violin section of the San Francisco Symphony for 30 years, began studying with Zeitlin was she was 14. Even at that young age, Van Hoesen recalled, Zeitlin “showed me what to do, demanded I do it, and insisted I get it right the first time. He taught me how to listen and how to concentrate. He insisted I focus on whatever new event I needed to do. Even if it was new information, he showed me how with proper thought I could get it right away with the right mind. He insisted I do this every time I played anything for him.” Today, Van Hoesen keeps a signed photograph of Zeitlin in her teaching studio at the San Francisco Conservatory of Music.

Roots across Several Continents
Zeitlin was born in the Soviet Union, in the Belorussian town of Dubrovna. When he was two, the Communist government exiled his family for possessing Zionist literature. Growing up in British-ruled Palestine, Zeitlin pursued his talent for violin. After receiving a diploma and postgraduate diploma from Juilliard on the eve of World War II, Zeitlin returned to Palestine, began concertizing, and attended the Hebrew University in Judaic Studies. He joined the Royal Air Force in 1943, performing for British, American, and Soviet troops throughout the Middle East.

After the war, Zeitlin returned to Juilliard in the fall of 1947 and continued his studies with Sascha Jacobsen, Louis Persinger, and Ivan Galamian. He gave his professional New York debut recital in 1951, and has been on the go since then.

Though he still carries a full teaching load at Eastman and continues to give master classes, Zeitlin has stopped touring. Asked if he has any advice for professional longevity, he offered thoughtfully: “Work consistently and seriously. Make sure you have a good teacher. Make sure you keep developing your horizons and intellect. Practice consistently and do it intelligently.”

Good words to heed from an artist who has lived them.