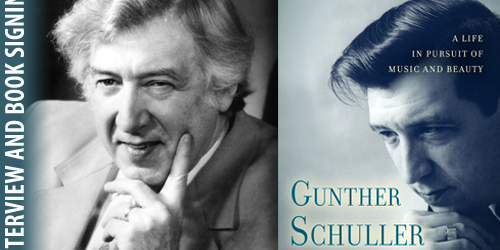 Pulitzer Prize-winning composer Gunther Schuller, the recipient of a MacArthur Foundation grant and a transformative figure in 20th century music, will be in Rochester this month for the publication of his memoirs. His visit will include an interview, free and open to the public, with Eastman School of Music Dean Douglas Lowry about his life and work.

The interview, at 7:30 p.m. Tuesday, Oct. 25, in the School’s Hatch Recital Hall, will be followed by a book signing in Wolk Atrium in the Eastman East Wing. The first volume of Schuller’s autobiography, Gunther Schuller: A Life in Pursuit of Music and Beauty, will be published later this month by the University of Rochester Press.

Schuller’s illustrious seven-decade career ranges from performing, composing, and conducting to his extensive work as an educator, jazz historian, administrator, music publisher, record producer, and author.  He’s been honored by both the classical and jazz worlds. Besides tracing his life, Schuller’s autobiography is being described as a historical chronicle of American music, with Alex Ross of The New Yorker calling it “an essential document of twentieth-century music, in all its forms.”

Though his career started in classical music – he was named principal French horn of the Cincinnati Symphony at age 17 and rose to that position seven years later with the Metropolitan Opera – Schuller was enthralled by jazz, and took part in the sessions that became Miles Davis’s Birth of the Cool album. He proposed a blend of classical and jazz techniques into a style he termed “Third Stream.”

Schuller has composed more than 180 works, including solo and orchestral works, chamber music, opera, and jazz. His large-scale orchestral piece Of Reminiscences and Reflections won the Pulitzer Prize in 1994. He has also received two Guggenheim fellowships, the Darius Milhaud Award, the Rodgers & Hammerstein Award, the William Schuman Award from Columbia University for lifetime achievement, the DownBeat Lifetime Achievement Award, the Gold Medal for Music from the American Academy of Arts and Letters, and is an inaugural member of the American Classical Music Hall of Fame.

As an educator, Schuller taught at Manhattan School of Music, Yale University, and the Berkshire Music Center at Tanglewood.  From 1967 to 1977 he was president of the New England Conservatory, where he established the first degree-granting jazz program at a major classical conservatory. He has written dozens of essays and several books, including jazz history studies and a recent volume on the art of conducting, The Compleat Conductor.

In Gunther Schuller: A Life in Pursuit of Music and Beauty (hardcover, 694 pages, $49.95), the legendary figure chronicles the first 35 years of his life. The book is scheduled for publication on Oct. 15.  It will also be available on Amazon http://www.amazon.com; and Barnes and Noble http://www.barnesandnoble.com/ .