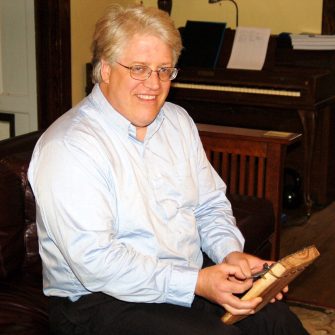 Trained as a violinist/violist and composer, Glenn West has maintained a life-long fascination with non-Western musical traditions. He is currently completing an MA in Music Education with a Diploma in Ethnomusicology at the Eastman School of Music. Introduced to Shona mbira at Eastman, he has immersed himself in the study of the instrument and traditional Shona musical practices. His teachers have included Martin Scherzinger, Erica Azim, Patience Chaitezvi, and Jenny Muchumi. He has also been a member of the Eastman Gamelan and is currently resident violinist at the Sri Rajarajeswari South Indian Hindu temple in Rush, NY. In this latter capacity he has performed in Western NY and Canada and recently completed a recording of Bhajans (sacred songs) with the Temple Bhajan Ensemble and instrumentalists from India.

His other musical activities include composition, teaching, conducting and performing. In addition to serving as a member of the Eastman Community Music School faculty since 1984 when he founded a program in pre-college composition, he has also taught music theory, music appreciation, violin performance, and coached chamber music at a variety of institutions including the University of Southern California, RIT, and the Sewanee Summer Music Center at the University of the South, where he was Composer in Residence and director of one of the student orchestras.

As an arts administrator he has served as General Director of Opera Rochester, Director of the Concert and Press Office at the Yale School of Music and Production Manager for the Rochester Philharmonic Orchestra.