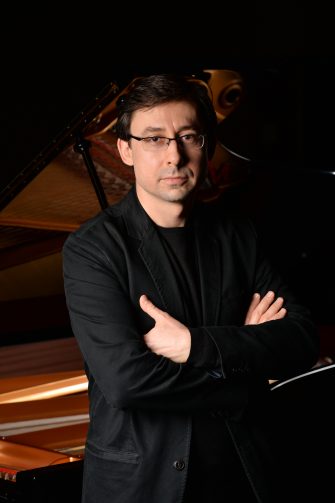 In the 2019-2020 season Mr. Kobrin will be making his Carnegie Hall debut as well as concluding his Complete Beethoven Piano Sonatas project for WETA radio in Washington DC. His new Schubert and Hindemith CDs were released in 2019 on Centaur and Quartz labels.

He has appeared in recital at major halls worldwide, including the Avery Fisher Hall in New York, the Kennedy Centre in Washington, Albert Hall and Wigmore Hall in London, Louvre Auditorium,Salle Gaveau and Salle Cortot in Paris, Munich Herkulesaal and Berliner Filarmonia Hall in Germany, the Great Hall of the Moscow Conservatoire, Sheung Wan Civic Centre in Hong Kong, as well as Sala Verdi in Milan and many others. Other  performances have included appearances at  La Roque d’Antheron, the Ravinia Festival,Ruhr Klavier Festival, the Beethoven, Busoni,Chautauqua and  International Keyboard festival in NYC.

Annual concert tours include performances and masterclasses in major conservatories in Asia, Europe and USA.

Before joining Eastman School of Music Alexander Kobrin was on the faculty of Gnessins State Academy of Music in Moscow, Schwob School of Music in Columbus, GA and in New York University. Mr. Kobrin regularly serves in the jury of international piano competitions, including Busoni, Hamamatsu, Rosalyn Tureck, Neuhaus and others.

Mr. Kobrin has released recordings on the Harmonia Mundi, Quartz, and Centaur labels, covering a wide swath of the piano literature to critical acclaim including “critic’s choice” awards in Gramophone and Fanfare magazines.

Mr. Kobrin was born in 1980 in Moscow, Russia. He is a graduate of Gnessins Special Music School and Moscow Tchaikovsky Conservatory of professors Tatiana Zelikman and Lev Naumov studios.