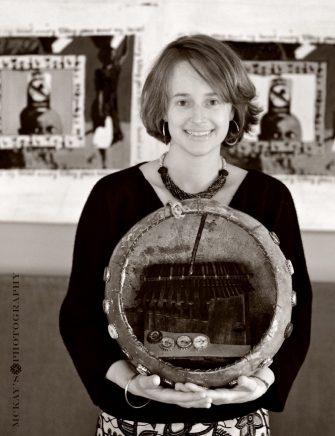 Jennifer W. Kyker holds a joint appointment as Associate Professor of Ethnomusicology at the Eastman School of Music, and as Associate Professor of Music in the College Music Department at the University of Rochester. She received her PhD from the University of Pennsylvania in 2011, after attending Mount Holyoke College for her BA. Her ethnography of popular music in postcolonial Zimbabwe, titled “Oliver Mtukudzi: Living Tuku Music in Zimbabwe,” was published through Indiana University Press’s African Expressive Cultures series in 2016. She has published articles on topics including listening and reception, music and gender, HIV/AIDS, and Zimbabwean musical bows, which have appeared in a number of journals, including Ethnomusicology, Ethnomusicology Forum, African Music, El Oído Pensante, and the American Journal of Public Health.

Supported by an ACLS Fellowship, Kyker’s current project, titled “Sekuru’s Stories,” is a born-digital public humanities project that explores the musical life of the renowned Zimbabwean mbira dzavadzimu player, oral historian, and ritual specialist Sekuru Tute Chigamba. Framing Chigamba’s oral histories through the Shona narrative genre of nhoroondo, it offers a first-person account of African musical history from below, tracing a single performer’s journey through experiences of missionization, colonization, labor migration, and independence. Prior to “Sekuru’s Stories,” Kyker has also received both Fulbright and Fulbright-Hays Fellowships in support of her work.

In addition to her scholarship, Kyker founded Tariro, a non-profit organization that pays school fees and related expenses for orphaned and vulnerable teenaged girls in Zimbabwean communities affected by HIV/AIDS, in 2003. In recognition of her ongoing work with Tariro, she received Mount Holyoke College’s Mary Lyon Award in 2013.