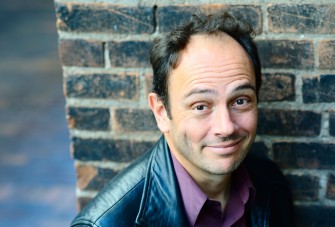 The music of Carlos Sanchez-Gutierrez has been described by the press as “vigorously organized and highly visceral…neither eclectic nor post-modern nor owing allegiance to any passing fashion”.

Born in Mexico City in 1964, he studied at the Peabody Conservatory, Yale University, Princeton and Tanglewood under Henri Dutilleux, Jacob Druckman, and Martin Bresnick. He is Professor of Composition at the Eastman School of Music in Rochester, New York.

Among the many awards he has received are the 2007 Barlow Prize, a Finalist Prize at the 2004 Malaysian Philharmonic Orchestral Composer Competition, as well as the 2003 Lee Ettelson Composition Award. He has also been honored in recent years with awards and fellowships from the Koussevitzky, Guggenheim, Fromm, Rockefeller, Camargo and Bogliasco Foundations. He was the 2000-01 American Academy of Arts and Letters Charles Ives Fellow and has received two B.M.I. Composition Awards, the Mozart Medal from the governments of Mexico and Austria, and a Fulbright Fellowship.

Sanchez-Gutierrez’s work is performed and recorded frequently in the U.S, Latin America, Europe and Asia.

Recently Sanchez-Gutierrez has been Composer-in-Residence at several international festivals: Puentes Mexico/España, Chihuahua International Festival, Michoacan International New Music Festival, S.L.A.M. Festival in Seattle, as well as with the Binghamton Philharmonic (through a grant from the New York State Fund for Music.)

Among Sanchez-Gutierrez’s most recently completed works are “Diaries” (a commission from the Orchestra of the League of Composers/ISCM),  “Memos” (a Barlow Endowment-commissioned work for the percussion ensembles SO, Kroumata and Nexus); “Five Memos” (a Fromm Music Foundation commission, written for Eighth Blackbird); …Ex Machina, for marimba, piano and orchestra (NY State Music Fund for the Binghamton Philharmonic); and “[…and of course Henry the Horse…] Dances the…” (Koussevitzky Music Foundation in the Library of Congress.)