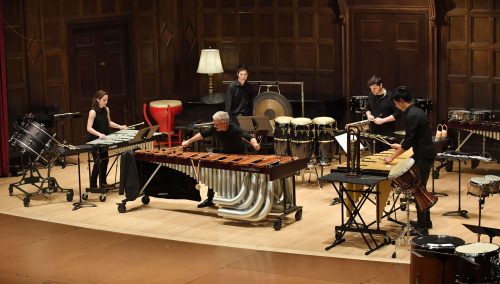 The Eastman Percussion Ensemble, under the direction of Michael Burritt, is a two-time winner of the Percussive Arts Society International Percussion Ensemble Competition and has performed at the international convention as a result in the 2013 and 2017. The group was also the featured ensemble at the 2009 Paris Conservatory international Percussion Festival, made its Kennedy Center Debut in 2012, and has performed at numerous local festivals. The ensemble has commissioned and premiered works by Alejandro Vinao and John Psathas and this year will be giving the world premiere of works by Grammy Award winning jazz pianist and composer Billy Childs as well as the Pulitzer Prize winning composer Joseph Schwantner in March 2022. The ensemble is the primary chamber experience for percussionists studying at the Eastman school and represents the upperclassman and graduate students in the studio.

This year the ensemble will release its first recording, The Works of Alejandro Vinao, in collaboration with the Grammy award-winning ensemble Third Coast Percussion.