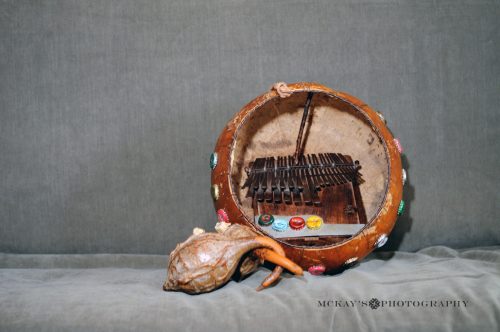 Theorist Martin Scherzinger started Eastman’s Mbira Ensemble in 2004. Played by Shona-speaking communities in Zimbabwe, the mbira is an instrument with 22 to 28 metal keys (lamellae) fixed to a wooden soundboard, which is then placed in a gourd resonator, used to amplify its resonance. Rattling pieces of metal, bottle caps or shells are attached to the instrument, which in turn produce buzzing sounds when the keys are plucked. The interaction of two or more players, singers, hosho (gourd rattles), and sometimes drummers and rhythmic hand clapping creates a complex musical fabric that requires a shift in musical perspective of the listener and performer.

Inextricably tied to traditional Shona spiritual beliefs and cultural practices, the mbira and its repertory predate the arrival of European explorers in the 16th century. Some of the traditional songs are said to date back over 1,000 years. The sophistication of the instrument and its music, however, has also led to their adoption and adaptation by contemporary musicians in Africa, Asia, and the West.

The ensemble aims to introduce students to the basic playing techniques of this ancient instrument as well as exposing them to traditional singing practices, hosho playing, and the traditional social and cultural context of the music. Students will also be guided to understand the music from the traditional Shona point of view as well as integrating it with their own musical understanding. Both beginning and advanced sections are offered, and each section meets formally once a week. Students wishing to participate should contact Jennifer Kyker at jennifer.kyker@rochester.edu or Glenn West at gwest@esm.rochester.edu.