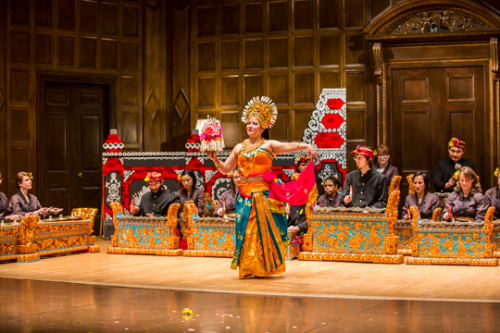 Gamelan at Eastman, as in Bali, is a communal effort. Our members include Eastman students, faculty, and staff, as well as many members of the Rochester community. Learned through the aural tradition without notation, the music requires players to work together for long periods of time to learn the music and how to play it. Each gamelan cultivates its own style and expressive nuance within the rich tradition of the music. The result is a sense of group unity and pride as the audience hears the music and witnesses the collective efforts of the group.

Each year, Eastman’s gamelan ensembles perform throughout the northeastern United States and in Canada in programs of traditional and contemporary Balinese music, present interactive workshops for audiences of all ages, and engage in creative collaborations with Western musicians and composers. In recent years, we have collaborated with Bobby McFerrin and the Paul Winter Consort, and have premiered new compositions by composers Wayne Vitale, Robert Morris, Jennifer Fontana Graham, Daniel Iannantuono, John Orfe, and Payton MacDonald. New members are welcomed into the Eastman gamelan ensembles each year, regardless of musical experience.

Founded in 1993, Gamelan Lila Muni (Heavenly Sound) is a Balinese gamelan angklung orchestra. This kind of ensemble, one of more than 25 distinct types found on the island of Bali, traditionally played only for ceremonial and ritual functions. In the 20th century, newer styles of composition transferred into the gamelan angklung repertoire. This ensemble now commonly plays a large variety of music ranging from traditional, ceremonial music to modern secular dances.

Gamelan Kembang Salju (Flower in the Snow), a gamelan joged bumbung (orchestra of bamboo poles) was founded in 1996. This modern type of Balinese gamelan accompanies the famed joged dance popular with tourists and villagers alike in Bali. This ensemble also commonly plays instrumental duets and quartets.