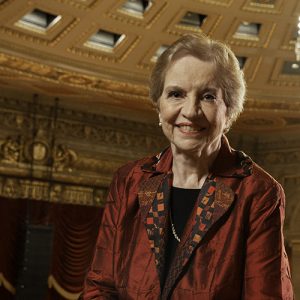 Jean Barr is Professor Emerita of Piano Accompanying and Chamber Music at the Eastman School of Music.  Being the first keyboard artist in the United States to be awarded a doctoral degree in accompanying, Professor Barr is considered by many to be a pioneer in her field.  She has sought to develop a broad understanding and appreciation of the collaborative arts by creating and directing graduate degree programs at a number of prestigious universities.  She also worked closely with the Music Teachers National Association to establish a presence for collaborative artists within that organization, and MTNA created the Collaborative Performance Advisory Committee with Jean Barr as its first Chair.  In 2003, the National Conference on Keyboard Pedagogy appointed a Committee on Collaborative Performance, chaired by Dr. Barr.

Much in demand as a guest lecturer and master teacher, Jean Barr has given classes throughout Asia, Europe, and North America, as well as Australia, New Zealand and the former Soviet Union.  She has appeared in concert with such distinguished artists as Carmen Balthrop, James Dunham, Gerald Fischbach, Pierre Fournier, Thomas Hampson, Donald McInnes, Eduard Melkus, Igor Ozim, François Rabbath, Gabor Rejto, Mstislav Rostropovich, Eudice Shapiro, Ivan Straus, Andor Toth, Zvi Zeitlin, and others. At the outset of her career, she was accompanist for the master classes of Jascha Heifetz, Gregor Piatigorsky, William Primrose, and Martial Singher.

Prior to joining the Eastman faculty to establish graduate degrees in Piano Accompanying and Chamber Music, Jean Barr taught at the University of Southern California, the University of Texas at Austin, Arizona State University and, in the summers, at the Music Academy of the West in Santa Barbara, California.  She was, for many summers, on the faculty of the International Workshops and recently enjoyed being at the Aspen Music Festival and School as a visiting faculty member in collaborative piano.