“Why are there no women up there?”

Teresa Ringholz is Voice Department Chair at the Eastman Community Music School. She holds undergraduate and graduate degrees in Vocal Performance from Eastman, as well as the Performer’s Certificate. She sang professionally in Europe for 20 years, has taught privately for over 25 years, and was an Adjunct Professor of Voice at Syracuse University from 2014-2016.

In 2015, I was teaching voice at a local music center and stepped out of my studio into the store front. There, I saw a little girl, about 8 years old, staring up at miniature busts of composers: Bach, Beethoven, Grieg, Mozart, Tchaikovsky…when I heard her pose that question to her dad.

Her question really hit home, because at that time I was working on a lecture-recital titled An Evening of Women Composers.

I had been asked to prepare a program for the National Women’s Hall of Fame (in Seneca Falls, New York), to be performed in the renovated Wesleyan Chapel–the place where the first Women’s Rights Convention was held in 1848. Some 300 women and men attended the two-day event, where a “Declaration of Rights” was penned, including “Women’s Right to Vote.”

I felt honored and awed as I stepped into the one-room chapel, the brick walls laid bare, with patches of mortar holding the weathered pieces in place. There were wooden pews and only a makeshift platform where an altar would have stood. The chapel had no piano, so I knew I had to transport a keyboard to the site for my collaborative pianist. This was a bare-bones production.

Preparing the repertoire set me on an unexpected journey. I had wanted to present this program of women composers at the museum because I found it fitting. I discovered, to my interest and delight, a rich, diverse, and beautiful repertoire. The compositional forms were no different from songs written by male composers of their era. These songs were not second-rate by any means.

In addition, I discovered fascinating stories about these women who produced exceptional works beyond the restraints of their time. Many fathers and husbands discouraged girls and women from cultivating and showcasing their talents. Before her marriage to Robert Schumann, Clara Wieck wrote: “I once believed that I possessed creative talent but I have given up this idea; a woman must not desire to compose – there has never yet been one able to do it. Should I expect to be the one?” 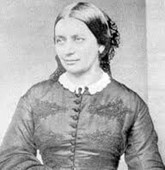 We see in this self-defeating sentiment the way women viewed themselves in their male-dominated world. Yet, some fathers, husbands, brothers and fellow composers supported the women’s extraordinary talents. If not for this encouragement, some of these women would have been silenced by their own doubt.

Slowly, barriers are breaking down: in our present day, women composers forge ahead to make their voices heard. As the French composer Ambroise Thomas said about Cécile Chaminade: “She is not a woman composer; she is a composer who happens to be a woman.”

As my voice rang out in the Wesleyan Chapel, I couldn’t help but imagine the excited sounds which had filled that room at the Women’s Rights Convention 167 years prior. I was proud to be there and proud to be part of helping bring women composers forward into the 21st century.

March is Women’s History Month and we have much to celebrate, appreciate, and discover.

I am so excited to share my journey with others as we explore some of the stories and songs of women composers through the ages. This rich repertoire is now being studied and performed by many scholars and performers, not for its novelty and obscurity but because of its quality.

My six-week interactive course, Art Songs by Women Composers: Repertoire and Historical Context, explores all these elements with discussion and examples from the vocal repertoire. The course is designed for students, teachers, collaborative pianists, and professional singers. It is my hope to bring an appreciation for these rediscovered musician pioneers who “happen to be women.”

By the way, I did speak up to that little girl at the music center. I told her: “Oh there are many women composers, you just have to discover them!” This Summer, we’ll do just that.