The Roots and Legacy of Summer Orff Schulwerk Teacher Education at Eastman: 1992-2019 – Part 2 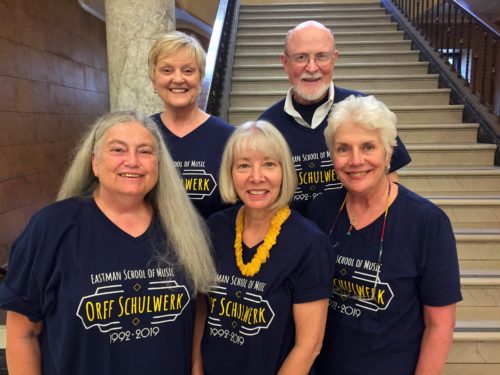 The summer of 2019 saw the 28th and final year of Orff Schulwerk teacher certification during Eastman’s summer session. A recent two-part article by Music Education graduate Stephania Romaniuk E’20 (MA) traces the beginnings of the Orff programs in 1920s Germany to their adoption and flourishing at Eastman.(Click here to read Part One.) 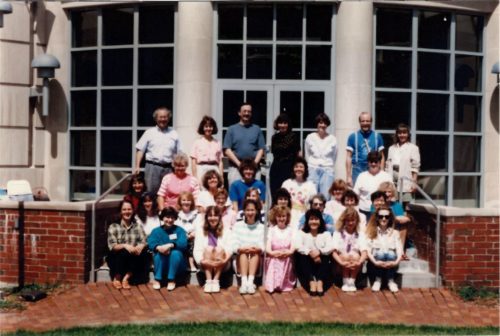 In Part One we read of the beginnings of the Orff Schulwerk movement under the German composer Carl Orff, its adoption in the United States – and in 1966 with summer workshops at Eastman. In 1970, Rochester was the third AOSA chapter to receive its charter.

Once those workshops concluded, however, Eastman experienced an Orff pedagogy instruction lull until the 1990s, when a young faculty member proposed hosting a summer Orff Schulwerk program on campus. Dr. Donna Brink Fox, then music education department chair and responsible for supervising student teachers, had heard Rochester-area educators express interest in taking Orff Schulwerk certification over the summer. Many teachers felt that the cost of out-of-town travel was prohibitive, and they were enthusiastic about the prospect of studying in their home city. Although the local AOSA chapter hosted Orff workshops, these educators “wanted a more grounded and foundational understanding of the Schulwerk … They wanted to put it into a larger context so they could see the progression and take it somewhere with their children,” explained Fox.

While Orff certification courses required curriculum and instructor approval by the AOSA, Fox knew she wanted to create a unique stamp for the levels courses taught at Eastman. She asked for a multi-year commitment from then-Associate Director at Eastman, Jon Engberg, who agreed to support the program. Following close-knit discussions with local teachers, who expressed their strong opinions on which faculty to choose, Fox invited Jim and Mary Helen Solomon from Florida to teach the first Orff Level I course at Eastman in 1992.

Levels II and III were added in subsequent years, and Dr. Janet Robbins from West Virginia University and Karen Medley (herself an Eastman graduate) joined the faculty roster. Early on, participants were mostly local teachers, but over time the program attracted students from all over the world.

Among the distinguishing factors of the Orff Schulwerk Teacher Education program at Eastman was the far-reaching influence of its faculty and participants. They took on leadership roles in the AOSA, presented at conferences, published articles, and advocated for Orff instruction locally, nationally, and beyond.

Additionally, Fox wanted to promote research as a unique feature of the Eastman program. She invited Robbins to develop and lead the OrffSPIEL (Schulwerk Project Implementing Eastman Levels), where teachers were encouraged to reflect on their own practice of the Orff approach once they returned to their classrooms. The findings from this research were published in The Orff Echo and presented at the AOSA national conference in Philadelphia in 1996. 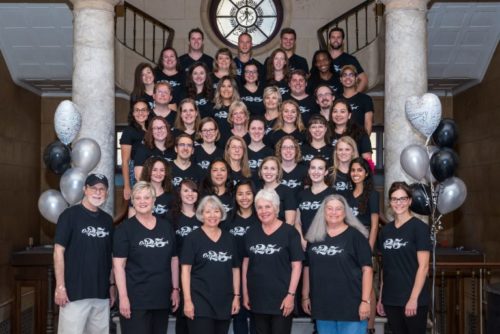 What held this program and these educators together for 28 years? Fox describes a keenly felt bond among faculty and students intentionally built over these courses at Eastman. Participants’ schedules included not only the required classes in pedagogy, movement, recorder, composition, and so on, but tutti hours where all the levels came together to learn and make music, and social gatherings like drum jams and live music nights. All were encouraged to feel welcome and part of a larger community: “It was like magic,” Fox recounted.

For nearly 30 years, the Orff at Eastman program aimed to inspire and enable music educators to cultivate meaningful musical expression among their students. After the decision of several faculty members to retire in 2019, the summer Orff course moved to Nazareth College, but the legacy of the Eastman Orff Schulwerk Teacher Education program lives on in each of its students who were touched by this unique approach. As Orff believed, “elemental music gives to the child powers that cannot otherwise come to fruition … and is a determining factor for the whole of his life.”

Stephania Romaniuk received her Master of Arts degree in Music Education from Eastman this year.