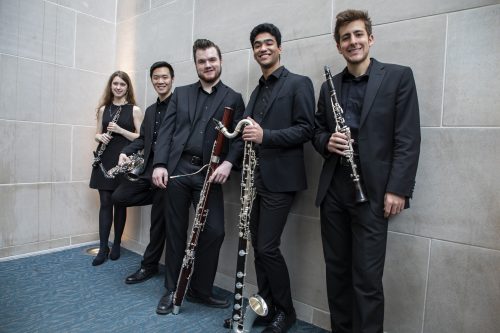 Eastman’s Sequoia Reed Quintet (oboist Gwen Goodman, clarinetist Michael Miller, saxophonist Trevor Chu, bass clarinetist Lucas Slavin, and bassoonist Harrison Short, all ’22E) was recently awarded the second prize in the winds division of this spring’s MTNA Chamber Music Competition. The reed quintet is a variation on the classic wind quintet – substituting flute and horn with saxophone and bass clarinet. We asked the members of the Sequoia Quintet about the history and unique sound of this relatively new chamber ensemble, and about the process of entering a music performance competition online.

You described the reed quintet as a relatively new type of chamber ensemble. Can you give me a short history?
HARRISON: The reed quintet was first ‘invented’ by a group of Dutch musicians about 25 years ago, when they formed the Calefax Reed Quintet. Slowly over time, their ensemble began to gain wider recognition as they collaborated with a number of other performers, composers, and also began writing their own arrangements. In the mid-2000s more groups began appearing internationally using the instrumentation, as well as the arrangements and compositions, of Calefax. In the United States, the Akropolis Reed Quintet (founded at the University of Michigan in 2009) was a watershed ensemble that really accelerated the growth of the reed quintet nationally, as well as establishing its artistic merit through a number of wins at major competitions. Now, there are dozens of professional reed quintets throughout the United States and around the world that commission new music for the reed quintet, as well as doing student outreach and education, that in turn lead to groups like ours.
How would you compare the sound of a reed quintet as opposed to the standard wind quintet?
LUCAS: The reed quintet has a wide palate of textures and timbres, and a great potential both for beautiful blend and independent virtuosity within the ensemble. The reed quintet also has a very wide dynamic range, similar to and sometimes greater than that of a wind quintet. The presence of bass clarinet and saxophone helps to create full, rich fortes without sacrificing the integrity of even the softest pianos, and blend becomes easier when dealing with only reed instruments. In the reed quintet, performers are often asked to perform passages that are greater in musical and technical demands than most audiences are accustomed to hearing from our instruments.
Similarly, reed quintets tend to perform using extended technique, such as multiphonics, circular breathing, and slap tonguing, which further sets it apart from the more traditional sounds present in a wind quintet. Several of the instruments featured in the reed quintet are newer additions to the orchestral world, and that gives the performers lots of liberty to experiment with their sound, as there are fewer preconceived notions about what these instruments “can” or “should” sound like. All these factors contribute to a chamber ensemble with an unmistakable sound and a unique musical identity.
What kind of repertoire does the reed quintet (and your quintet) have?

GWEN: When people think about reed quintet repertoire, usually the first thing that comes to mind is modern music. Because the reed quintet as an ensemble is relatively new, a lot of the repertoire is dissonant, jarring, and just plain crazy. For example, Sequoia recently played David Biedenbender’s Refraction. It features blaring multiphonics, complicated hocket rhythms, and a lot of textures that aren’t heard in everyday music. Splinter, by composer Marc Mellits (an Eastman alumnus), is another modern classic for the ensemble. Each movement represents a different kind of tree using unique minimalist textures.
Sequoia plays plenty of arrangements as well, such as Mendelssohn’s The Hebrides and Jean Philippe Rameau’s harpsichord work, Le Rappel des Oiseaux. Arrangements like these allow for so much exploration with colors and timbres unique to the reed quintet. We are a little biased, but we always wonder why these composers didn’t write their pieces for reed quintet in the first place!
Was the MTNA Competition held virtually? Can you describe your audition and performing process?

HARRISON: It was held virtually, which was a big surprise to all of us (as most things have been during this unprecedented time). The week after spring break was when we were supposed to fly to Chicago and compete in the live round, so we had decided to stay in town during spring break for some final rehearsing and planning to get ready for the trip. Once it was cancelled, they sent out an email saying that we could send them new recordings, or use the recording that we submitted for the preliminary round in December. It was really fortunate that we were all at Eastman over spring break because we spent the following two days recording for the competition before we flew home to begin virtual learning.
In the final round of the competition it was our ensemble and six saxophone quartets, which is fairly common. Saxophone quartets tend to be the winners in wind chamber music competitions, and often it is very hard for alternate ensembles to compete against their virtuosity, blend, and repertoire. This is why we were so pleased with the results of the MTNA competition this year.
What are your plans as an ensemble – especially when public concerts are not possible?

TREVOR: Since we were awarded second place at the competition, we are hoping to compete in the competition again in hopes of placing first next time! Along with that, we are in the process of finding other competitions to participate in and acquiring new repertoire for those competitions. In terms of the immediate future, we are currently releasing our recordings on a weekly basis that we submitted for MTNA on our Instagram (@sequoiareeds) and Facebook (Sequoia Reed Quintet) pages in lieu of public concerts so that people may be able to enjoy the music online. When the videos are up, we are planning on uploading the full pieces onto our YouTube channel!
Here is a full video of the Sequoia Reed Quintet on Youtube, performing Mendelssohn’s Hebrides Overture:
https://www.youtube.com/watch?v=9-rV0_x89PQ