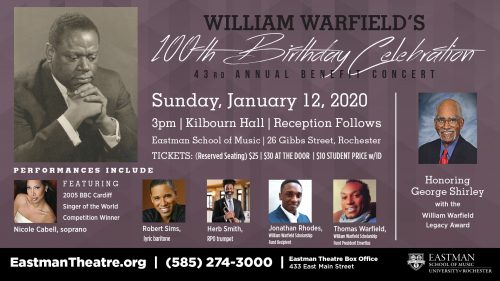 Since it was founded in 1977, the William Warfield Scholarship Fund, Inc. has provided financial aid to more than 35 students at the Eastman School of Music, and spotlighted talented recipients in an annual benefit concert. This year’s William Warfield Scholarship Benefit Concert will be held in the School’s Kilbourn Hall on Sunday, January 12, 2020, at 3 p.m. and features the 2019 scholarship recipient, Eastman student Jonathan Rhodes, who also won in 2018.

This year’s concert also celebrates the 100th birthday of its namesake, William Warfield, a great baritone and Eastman graduate ‘42E, ‘46E (MM); for a full account of Warfield’s remarkable career, see below.

Tenor Jonathan Rhodes Tenor, of Orlando, Florida, is a fourth-year performance major at Eastman, studying under Anthony Dean Griffey. Jonathan has performed in Eastman Opera Theatre productions of Monteverdi’s L’incoronazione di Poppea and Ricky Ian Gordon’s The Tibetan Book of the Dead. He made his professional concert debut with the Rochester Oratorio Society in 2018 and has been a featured performer in the Landmark Society’s 90th anniversary concert alongside the Ying Quartet and members of PUSH Physical Theatre. Jonathan is a multi-year scholarship recipient of the William Warfield Scholarship Fund Inc.

This concert will also honor George Shirley, the first black tenor and second African American male to sing leading roles with the Metropolitan Opera, where he remained for eleven years as leading artist. He participated in celebrated recordings of Mozart’s Cosi fan tutte with Leontyne Price (for which he won a Grammy Award in 1968) and Debussy’s Pelléas et Mélisande under Pierre Boulez. George has performed more than 80 operatic roles, as well as oratorio and recital literature, in his 60-year career.

Over four decades, recipients of the William Warfield Scholarship have included such notable singers as soprano Julia Bullock ‘09E, winner of the 2014 W. Naumburg Foundation’s International Vocal Competition; and bass-baritone Jamal Moore ‘12E, who was featured with the University of Rochester Yellowjackets on NBC’s The Sing-Off in 2011, and is performing internationally with the a cappella group The Exchange. Soprano and Nicole Cabell ’01E, winner of the 2005 BBC Cardiff Singer of the World competition and another former Warfield Scholarship recipient, will also perform on this Sunday’s program.

Joining Rhodes, Shirley, and Cabell on the concert program are: 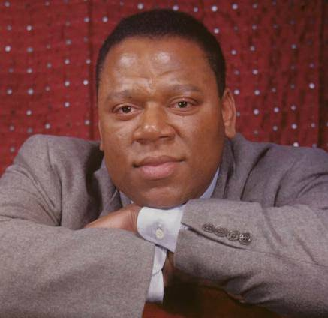 Born January 22, 1920 in West Helena, Arkansas, William Warfield moved to Rochester at a young age with his family. He graduated from the Eastman School of Music in 1942, and after four years of military service, returned to earn his master’s degree in 1946. Warfield then performed in the national tour of the Broadway hit Call Me Mister, and on Broadway in Marc Blitzstein’s Regina.

In 1950 he made his recital debut in New York’s Town Hall, and also played “Joe” in MGM’s Show Boat, giving a magnificent onscreen performance of the song “Old Man River.” Warfield also sang the first performance of Copland’s Old American Songs, with the composer at the piano. However, his most famous portrayal was as Porgy in George Gershwin’s Porgy and Bess.  Warfield also distinguished himself in solo recitals, and as a soloist in Handel’s Messiah, Mendelssohn’s Elijah, the Mozart, Verdi, and Brahms Requiems, and the Passions of Bach. He recorded Messiah with Leonard Bernstein and Eugene Ormandy, and the Mozart Requiem with Bruno Walter.

William Warfield’s last performance at Eastman was at an 80th birthday concert in January 2000, reading the words of Dr. Martin Luther King in Joseph Schwantner’s New Morning for the World with the Eastman Philharmonia, and receiving an Alumni Achievement Award.

This great American artist’s legacy at Eastman also includes the William Warfield Scholarship, given annually to a deserving voice student from a background similar to Warfield’s; and the William Warfield Partnership Pathways Program between the Eastman School’s Community Education Division and the Rochester City School District, which provides expanded musical education and opportunities for city youth.