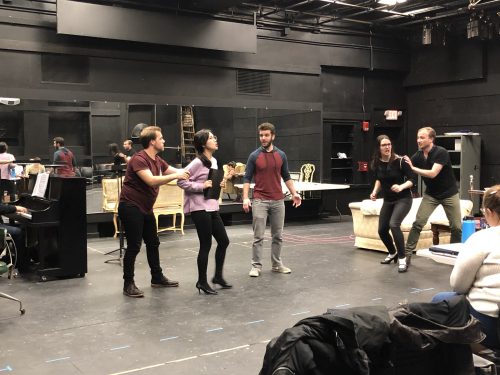 Frank and Buff attempt to hold back the two divas while Mr. Plume gets in the middle of their fight. From left to right: Kevin Spooner, YeJi Lee, Matthew Campisi, McKenzie Warriner, Nathan Savant. Photograph by Jeremy Lopez.

In just one week, Eastman Opera Theatre presents a comedic double bill featuring Antonio Salieri’s Prima la musica e poi le parole [First the Music, Then the Words] and Mozart’s The Impresario. The production includes stage direction by MM candidate Ian Silverman and musical direction by Timothy Long. This is the first blog post by voice student Jeremy Lopez, one of the students playing Mr. Plume in the production, about the opera and his preparation.

We’ve all heard of a “play within a play,” a famous literary device that authors – such as Shakespeare in Hamlet – use to tell a story in the middle of another story for a number of effects. However, it’s not every day you get to see an audition within a play. Antonio Salieri’s Prima la musica e poi le parole [First the Music, Then the Words] and Mozart’s The Impresario take the trope of an “audition within a play” in two directions that compliment each other perfectly in this winter’s Blackbox double bill production, which will be presented by the Eastman Opera Theatre in six public performances from January 25 to February 2.

The double bill opens with the Salieri opera, an 18th-century Italian take on the audition scene. The story follows a composer and a poet who are set on finding the prima donnas for their newly written opera. Over the course of the show, we encounter two sopranos vying for the position – one ­soprano of the opera seria (serious opera) variety, and one of the opera buffa (comic opera). The comedy culminates with the two singers duking it out over the position. Who wins? You’ll have to come to the show to find out!

After a brief intermission, the space transforms into a mid-20th century production office where we see Frank, the Impresario of the company, and Buff, his righthand man, starting a brand-new opera company. With a contract already in hand, all they need are performers. This take on Mozart’s opera incorporates several excerpts from shows by Shakespeare, Gilbert and Sullivan, and more being brought into the audition room in a most dramatic fashion. Outrageous fights over the leading role and the highest salary ensue (in English and German), leaving the Impresario nearly in tears.

While these two operas are comedies in their final forms, my castmates and directors have been hard at work preparing them since September. The staging is the fun part of putting an opera together; however, before we were able set foot on the stage, we had to spend weeks in music coachings with our music director, Timothy Long, to create a balance among the performers that brings the music from notes and rhythms to collaboration and storytelling.

One of the most challenging parts of this production was actually learning and putting together the Italian recitative in the Salieri opera. Baritone Kevin Spooner, who plays the Poet in the Salieri and Buff in the Mozart, remarks that “the sheer amount of recit packed in the hour-long production is a feat in itself.”

He continues, “The dialogue is so personal and connected because the score calls for just four characters. Salieri sets the recit in a different way than most composers of the time with his constant, stark harmonic changes, sometimes even in the middle of short lines.” Kevin’s castmates shared many of the challenges that he faced with the recitative. However, Maestro Long’s direction pulled it all together. 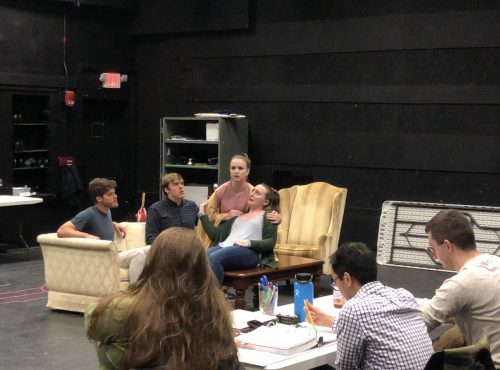 Once both shows were learned, coached, and memorized by all of the performers in the second week of November, the cast moved into the Blackbox Theatre for staging. Stage director Ian Silverman had his work cut out for him; staging a comedy is never easy because you need to make sure that what is written on the page can be understood by the audience as well. However, Ian was able to pull both shows together in just under a month, before we all left for winter break.

Being in Eastman’s winter opera is a unique experience because of the way the production straddles winter break. Our last week of rehearsals in December, before break began, consisted of full runs of the two operas in nearly their final forms (but without costumes and sets). However, just when it was truly coming together, it was time to put it down for a month.

The experience of stepping away from full-company runs for an extended period of time was challenging for me because I had to find a way to keep all of the music fresh in my mind and my voice, and not lose the character that I had developed throughout the staging process. While practicing these things alone helped retain much of it, it also helped tremendously to watch videos of rehearsals.

Now that classes are back in session, the final stretch of the production is underway. The company’s next steps are going to be the most critical of the whole process. During the next week-and-a-half before the show opens, we will be working the two shows into the sets, costumes, lights, and full tech before we enter our final dress rehearsals. There is still more to come on this final phase of the production!