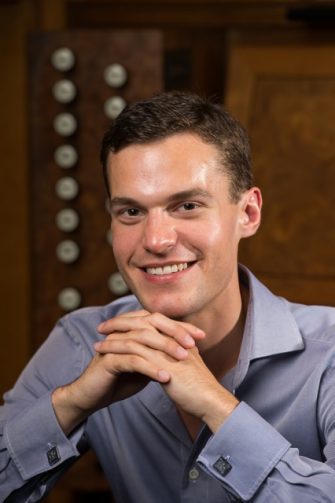 Organist Nathan Laube brings The Art of the Fantasy to the Memorial Art Gallery on January 16.

The world-renowned musicians on Eastman’s performance faculty teach and perform throughout the world, but our Faculty Artist Series allows Rochester music lovers to hear them in solo recitals and chamber music right here in Rochester. Our winter/spring 2020 lineup begins on Thursday, January 16, as Associate Professor Nathan Laube performs on Eastman’s Italian Baroque organ at the Memorial Art Gallery.

Laube has titled his recital The Art of the Fantasy, and will include examples of the genre by Byrd, Van Noordt, Sweelinck, and Louis Couperin. This performance is part of the Third Thursday Concert Series, which features different artists at the Memorial Art Gallery on the third Thursday of each month.

His Naxos recording of Stephen Paulus’ Grand Concerto with the Nashville Symphony received a Grammy Award for Best Classical Compendium; and he has a solo recital recording on the Ambiente label at the Stadtkirche in Nagold, Germany.  In addition, many of Laube’s live performances have been featured on American Public Media’s Pipedreams.

Nathan Laube’s Art of the Fantasy is the first of no fewer than 21 Eastman Faculty Artist Series concerts scheduled this semester:

Tickets for Eastman’s Faculty Artist Series are $10 for the general public and free to current Season Subscribers and University of Rochester ID holders. Tickets can be purchased at the Eastman Theatre Box Office, 433 East Main St. 9:30AM–2:30PM.,Monday-Friday; by phone (585) 274-3000; or online at http://eastmantheatre.org