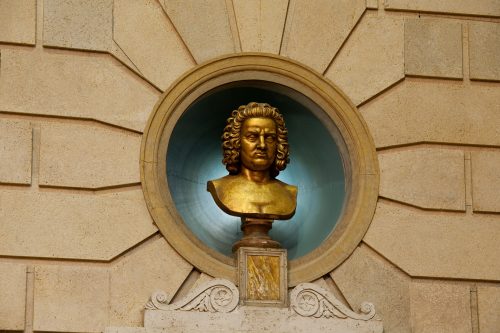 The bust of Johann Sebastian Bach in Kodak Hall at Eastman Theatre. Photograph by J. Adam Fenster/University of Rochester

Since 2013, the Eastman School of Music has presented a free concert series called the Bach Cantata Series, which was designed to give singers and choral conducting students the opportunity to perform some of the many works by Johann Sebastian Bach. The series was created by Eastman’s Director of Choral Activities, Dr. William Weinert, in an effort to continue the traditional performance practices of Bach’s music. These performances are held at Reformation Lutheran Church in downtown Rochester, and feature singers and a chamber orchestra that stay true to his intention of one musician per part.

Bach’s music stands out in the Baroque repertoire, and has since become the model to which we compare works by other composers of the same period. In the cantata genre, Bach stands out as one of the most prolific and influential composers. He started writing cantatas after moving to Leipzig in 1723, and subsequently premiered one every Sunday for the several years following. Bach collected his cantatas in annual cycles according to the liturgical calendar, and typically are based upon the gospel readings for each day. Although he wrote about 300 cantatas over the course of his career, over 100 have been lost to posterity.

This year, there will be four performances in the Bach Cantata Series. Each program will consist of several cantatas, and feature current Eastman students and local professional singers. The first concert of the series will be held on Sunday, October 27th featuring Rayvon Moore and Wenhao Mu, who will be conducting BWV 114 (Ach, lieben Christen, seid getrost) and BWV 30 (Freue dich, erlöste Schar) respectively. Future performances will be held on November 17th, February 16th, and March 29th.