Alumna, Performer, and Composer Maria Newman is “forever married to my school” 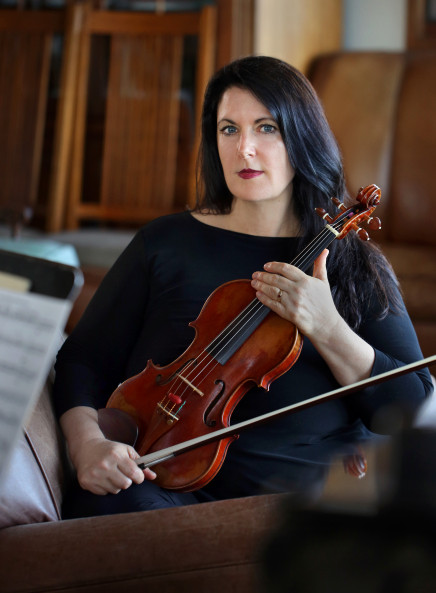 When composer and string player Maria Newman begins her residency at the Eastman School of Music next week, it will be her first return to Eastman in 35 years, since she graduated with a bachelor’s degree in violin in 1984.

She has definitely been busy in the interim, developing a busy career as a concert and soundtrack violist and violinist (for movies ranging from James and the Giant Peach to Star Wars Part IX), and an estimable career as a composer in many different media from chamber music to silent film scores. During her residency, from September 7 through 13, Eastman will be exposed to these facets of Maria Newman’s career … and several more.

Maria comes by these abilities naturally, as a member of Hollywood’s so-called “Newman Dynasty.” Her father, Alfred Newman (1900-1970), was a popular conductor of the Hollywood Bowl Orchestra, whose movie scores won him nine Oscars as a composer or arranger. Her brothers David and Thomas are also notable film composers, and her cousin, singer-songwriter Randy, won a couple of Oscars for songs in the Toy Story series.

Though 35 years have passed, Maria Newman still describes herself as “forever married to my school.” “Eastman meant so much to me,” she said in our recent interview. “Not just growth as a musician but also in confidence and artistic freedom. I was able to be a free spirit, and didn’t feel I had to follow a traditional path. When I left, I had the gumption and the motivation to follow my own path.”

Once she had that gumption, her path led her away from bearing the weight of “growing up Newman” in an unusually talented musical family, to having a thriving career, or careers, of her own. She continues to be an active performer on viola as well as violin, and will play her own music on both instruments during her residency. (See the complete listing of residency events below.)

Maria Newman’s presentations at Eastman will also include talks on entrepreneurship and sustaining a musical career. She is a firm believer in making her own opportunities as a musician, which includes directing a group called Malibu Friends of Music and starting the Montgomery Arts House for Music and Architecture, named in tribute to her mother. Montgomery House, or MAHMA, presents more than 40 classical concerts and recitals each year, from traditional chamber music to a live-to-film performance of one of Maria’s scores for a silent film. MAHMA has also hosted a number of guests from Eastman, including Dean Jamal Rossi, Beal Institute Director Mark Watters, and Professor of Guitar Nick Goluses, who will premiere Maria’s Storge on an Eastman Virtuosi concert.

“It is my privilege and honor to have the opportunity to come and be at Eastman for a wonderful week of music making and conversation,” says Maria Newman. “Eastman has made a huge difference in my life, and I do not know where I would be now if I had not had the remarkable experiences that I had there as a student!”

In this Institute for Music Leadership (IML) public event, Maria Newman will speak about some of the difficulties of being born into a well-known musical family, and her attempts to break free of those barriers. She will also talk about projects, initiatives, and ventures that she has launched throughout her musical career, in the light of success, failure, and lessons learned.

A conversation with Maria Newman and her longtime colleagues Scott Hosfeld, violist, and pianist Wendy Prober, about her famous family of musicians, their musical influences, successes and failures, hopes and dreams, paths and endeavors, and what it has been like to “grow up Newman.” Q&A to follow, led by Eastman faculty members Reinhild Steingröver and Mark Watters. Presented by the Beal Institute for Film Music and Contemporary Media.

“In Remembrance: A Tribute to Courage. Heroism, and Hope for the Future“

This program includes four works by guest composer and violinist Maria Newman, including Songs from Time of War: A Breath of the Mississippi, with Isabella Thatcher, soprano, Scott Hosfeld, violin, and Wendy Prober, piano; and Kate Shelley and the Midnight Express, performed by Newman, Thatcher, Scott Hosfeld, Probert, and Joaquin Hosfeld, percussion.