Advocacy through Art Song: An Eastman alumni initiative gives a voice to young people with autism 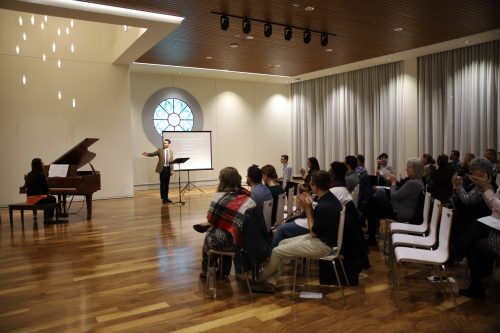 Simon Barra performs alongside his wife, Kseniia Barrad, during a workshop performance of the Lynx Autism Advocacy Project. Photograph by Mairead Kahn.

The Lynx Project is an art song initiative created by co-founders soprano, Caitleen Kahn, and mezzo-soprano, Megan Moore in 2015 after completing their graduate degrees at Eastman. Together with Eastman alumni Steven Humes and Florence Mak, they form the Lynx Project; an ensemble with the goal of bringing the incredible world of art song to a wider audience through intimate and inclusive performances and an exploration of the boundaries of traditional recital form.

Neither Caitleen Kahn nor Megan Moore can remember exactly who first had the idea, but they agree the spark for the Lynx Project was a discussion about how difficult it was for students and young graduates to find art song performance opportunities outside of Eastman. “We liked to bounce around ideas about innovating the art form and making it appealing to a larger audience,” says Moore. “We used to muse about just how cheap and easy it is to put on, especially in comparison to opera!”

Official meetings began during the last semester of their master’s degrees, at which time they recruited tenor, Steven Humes and pianist, Florence Mak to join the organization. “Megan and I really wanted to be professional about it from the get-go,” says Kahn. “It seems funny now, but we thought it would feel too casual if we met at each other’s houses, so we opted to have our ‘business meetings’ at Java’s … until we realized how much money we were spending on coffee!” 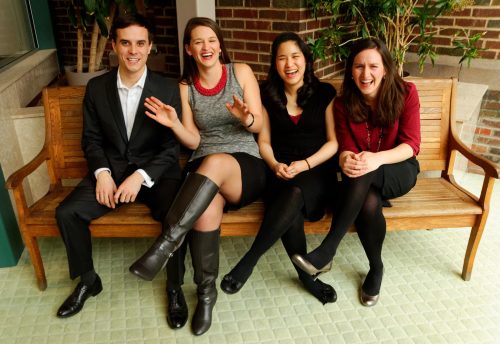 Caitleen, Megan, and Steven may have begun their Eastman studies solely planning to hone their vocal technique and performance craft, but they were soon drawn to the Catherine Filene Shouse Arts Leadership Program (ALP) offered through Eastman’s Institute for Music Leadership. This certificate program allows students the opportunity to explore coursework in several professional areas that include Entrepreneurship, Leadership, and Arts Administration through paid, for-credit internships in Rochester and around the world.

Kahn credits her ALP experience with giving her some of the necessary professional skills and tools needed to start an organization. “ALP opened my eyes to a whole new set of career possibilities and ways to use music to make a difference. I think the biggest impact Eastman had on me though was the people I met.  Wonderful friends, incredible collaborators, and Lynx teammates – tangential connections that turned into job opportunities.”

“I think the ALP Program at Eastman helped to instill a ‘go-get-it’ attitude about my role in opera,” says Humes. “Part of studying at Eastman is being able to look around the room and see who you want to make music with. If you asked me on day one whether we’d all be on this journey together five years later, I wouldn’t have been so sure. However, it’s completely worked out, and for the better!”

Lynx Project has been putting on unique concerts since 2016, including:

Voices from Beyond the Grave (Fall 2016): an evening of spooky art song in Cincinnati.

Snapshots of Every Voice (Spring and Fall 2017): featuring five Eastman students and graduates creating a program of art song based on one simple question: What would you like to speak into the world through music? 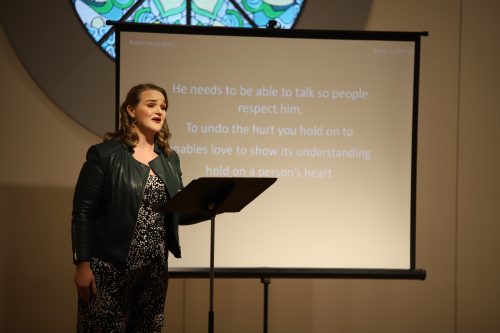 Megan Moore’s sister, Katie Masotti, who works with children with autism, specializes in an educational method called the Rapid Prompting Method, which allows non-verbal individuals with autism to communicate by pointing to letters on a board (a process called letter-boarding) to spell out words and sentences – and to create poems.

“Before my sister’s work exposed me to the hearts and minds of this community, I would have presumed incompetence from a non-verbal autistic person,” says Moore. “Like so many others, I would have seen the lack of eye contact, the seemingly random physical and vocal outbursts, and assumed there wasn’t much going on in their minds.”

“My sister would share with me the incredibly complex, honest, and universally relatable thoughts and feelings of the incredible young people with whom she was working. So often these words were also very lyrical, very poetic, and it occurred to me that Lynx Project had an incredible opportunity to be a platform for these voices; to allow their voices to be heard through art song.”

The process began with students submitting their poetry and prose for consideration. From there, composers selected texts that they felt drawn to, and began setting them to music. The March concert, open to all, featured the words of students Kenta Mignot, Luke Burke, and Michael Zepf, as well as the music of composers Tariq Al-Sabir, Joel Balzun, Liberté-Anne Lymberiou, Travis Reynolds, and Stephen Variames.

The Autism Advocacy Project has received grant funding from ArtsWave and Ohio Arts Council for two years in a row to support this project. 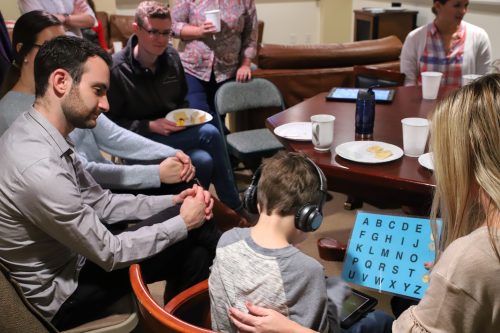 One of the Autism Advocacy Project’s poets, Luke, letter-boarding at a lunch break with Lynx Project singer Simon Barrad. Photography by Mairead Kahn.

In the Fall of 2018, the Lynx Project presented Behind the Scenes, a workshop which brought together composers, performers, writers and their community to learn more about the process through which each song was written. The emotional impact of of hearing the honest texts of the poet through song was felt by everyone in the room.

For pianist Florence Mak, the experience was “completely eye-opening… It’s so easy to take things for granted like having a voice or being able to verbalize our thoughts and emotions. So when we’re able to witness them hearing their voices amplified, it’s an incredible experience.”

All members of the Lynx project agree that some of the most important accomplishments of this project have been realizing that they have the ability to make people feel heard and important, understanding the need for patience with different styles of communication, and using the power of music to connect people as individuals.

One of the special moments for Caitleen Kahn was the impact this project has had on one of their writers, who struggles with severe anxiety and has difficulty leaving his house. “He was unable to attend our workshop performances in October, and upon hearing this, two of this year’s performers, Simon and Kseniia Barrad, offered to take a keyboard to his house and perform a private concert for him. Shortly before Christmas, they went over, set the keyboard up in the living room, and performed the commissioned songs for him and his family.

“Once they’d finished these songs everyone wanted them to keep going. Our writer letter-boarded to them that night that he, ‘really enjoyed the singing and piano playing,’ and his mom wrote that the family could tell how happy he was.”

While Lynx Project is currently based out of Chicago, they still plan to bring the incredible world of art song to as many people as possible, including another installment of the Autism Advocacy Project in New York City this coming April.

Today, the four original members remain on the board and staff for Lynx Project, but many of their performers are hired locally from the cities in which the concerts take place. “We see ourselves as an organization, but the ensemble within it is fluid. We’ve always wanted it to be bigger than ourselves.”

You can see the members of the Lynx Project in a video about the Autism Advocacy Project at  https://vimeo.com/249943807

Members of the Lynx Project point out that most of these songs are published independently by the composers, and anyone interested in singing them should contact lynx project.org.