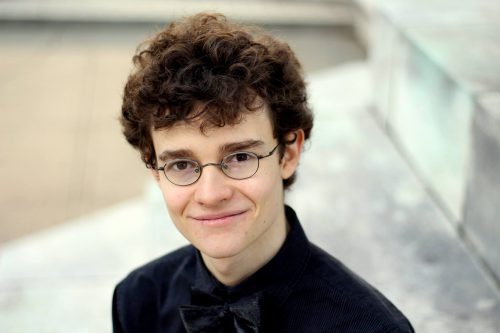 Calhoun, 26, is in his final year pursuing his DMA in Composition studying with Carlos Sanchez-Gutierrez, Ricardo Zohn-Muldoon, and David Liptak. He received his MM in Composition at the Peabody Conservatory and his BM in Theory/Composition from Blair School of Music at Vanderbilt University. Calhoun’s influences are broad, but he enjoys Finnish composers especially: that includes Kalevi Aho, Kaija Saariaho, and Einojuhani Rautavaara.

On Calhoun’s website, one can find links and videos to many of his compositions, and the ones front and center feature Eastman’s own students and performance spaces. Along with a beautifully annexed catalog, the site provides the public with easy viewing and listening access to his work, they also offer a glimpse into his approach as a composer:

“Most of those pieces were by commission,” Calhoun said. A prolific composer, Calhoun’s range extends across an impressive list of instrumentation and style choices, with a smattering of clever or whimsical titles: everything from Laser Gazelle for two baritone saxes, contrabassoon, and bass trombone, to Escenas de Ecuador for ten or eleven violins, a Suite for Solo Double Bass and Close Enough, for two percussionists playing identical sets of four different things.

“This isn’t my first orchestra or large ensemble piece,” Calhoun said. Elegy for orchestra and Coruscation, both for orchestra, are available for listening on his website. “I’m used to writing for large ensembles, and what prompted this new piece is that Eastman has orchestral readings… Once I’m out, probably no orchestra will be playing a piece of mine for a while.”

After doing a Wind Ensemble reading in 2017, Calhoun decided that to make the best use of his time at Eastman, he needed a piece in the orchestral reading, as well: “This wasn’t a piece that anyone was asking for, it exists in the instrumentation it does for this reading.” Calhoun also made the pragmatic decision to write for the ESSO, and he believes that because of the size of the orchestra, it had fewer people writing for it.

He describes the piece as “slow and mostly sparse.” Realizing the demands of an orchestral reading, Calhoun wanted to make sure that the piece was both completed on time, and could be put together quickly.

“The title was added afterwards,” Calhoun continued. “I tend to do that. Occasionally I have a title planned at the beginning that’s nice, but most of the time I get to the end of the piece and I realize it needs a title! This isn’t the ‘50’s or ‘60’s, where you could call something Composition for Orchestra. I mean, you could, but no one would ever play it if you did that.” (Unfortunately, the story behind the title of Laser Gazelle didn’t come up in our interview.).

“‘(My process) starts with a word that is kind of close to what I want the title to be, and then going into a thesaurus and picking words until I find one that I like better. As I learned, ‘constellated’ doesn’t specifically mean ‘constellation’ as it refers to stars, but to collected things, so the title includes that, and ‘traces’ means both ‘lines traced’ and eventually coming together with a bunch of independent lines simultaneously…

“‘Traces’ is also used in the sense of vestiges left behind, as a orchestration technique I learned at Peabody, ‘pedaling’ the orchestra. One instrument plays a line, and other instruments slowly and quietly pick up notes from that line and sustain them. It’s just like if you put down the sustain pedal on a piano,” Calhoun explains. “But the nice part of the orchestra is that you can control when the note is cut off.”

“I’m excited for this performance,” Calhoun said. “It’s coming together really well, and Garrett – the conductor – has a really good understanding of the piece, and he’s doing a great job getting out the players what the piece needs. He actually had the idea to mute the trumpets at one spot … He definitely understands what I’m going for and figured out ways to bring it out.”