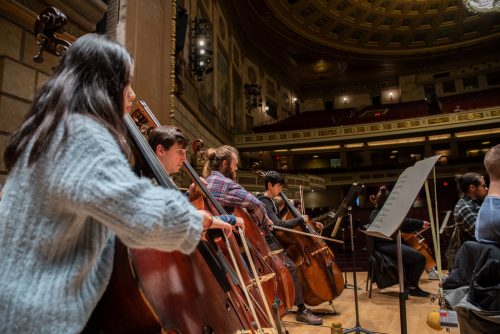 The Eastman Philharmonia in rehearsal

On Wednesday, November 14, 2018, Neil Varon, conductor, and The Eastman Philharmonia present Mahler’s Symphony No. 6 at 7:30 p.m. in Kodak Hall. Mahler’s Sixth Symphony is a fantastical work that is thought to draw on elements of his life. As a result, Mahler may have subtitled it“Tragic” at some point during the compositional process.

“For me the, symphony is somewhat of a dream gone bad,” says Maestro Varon. “The first movement was written in 1903, and World War I broke out in 1914. Now I don’t know where Mahler experienced war to the degree that is often depicted in his works, not only here but in the songs of Des Knaben Wunderhorn, and even the Ruckert Lieder, but it just seems like the first movement is the troops marching between the trenches; a forced march – that’s the feel of it. The andante is a total break from this drudgery, and that is why we are playing it second. It almost depicts a beautiful vision of calmness and poise, that could be his kids playing, or even heaven. There are so many sections in this movement that seem to be ethereal in nature, where you can almost sense the soul just drifting up. The third movement feels like the devil’s kitchen to me; it’s very angular, and ‘off balance,’ which makes it a very difficult section for the ensemble.”

A notoriously famous element of this piece is the very literal “hammer-blows” of the final movement, where the audience can witness a giant sledge-hammer come crashing down onto a large wooden box. When Mahler revised the work in 1906, he deleted the third hammer-blow, supposedly to avoid jinxing his own fate. This unfortunately proved in vain, for besides the death of his daughter the following year and the diagnoses of his fatal heart condition, Mahler also lost his prestigious job with the Vienna State Opera. The hammer that will be used in the Eastman Philharmonia performance has come all the way from Duke University, and the box was made by Eastman’s very own Percussion Technician, Brian Stotz.

“We’re actually using all three of the original hammer blows,” adds Varon. “Mahler took the last one out himself and re-orchestrated that section based on his own superstition that if he had left it in, he himself would suffer the last blow of fate. We said that nothing can happen to Mahler anymore, so we’ve restored it.”

On the famous final movement, Varon suggests, “the last movement is also like a dream sequence. You can almost sense the mist in the air represented by string tremolos and the thirty-second note trills in lower strings. Every once in a while, he drifts away and you hear cowbells in the distance, and faraway church bells. It’s how he represents the good old days – shades of pastoralism – which has a very calming effect. Then there is a very strong romantic statement in the strings, almost pushing forward, and you come into the first hammer blow, and you fall back. Then it begins to build momentum again, and again you fall back. The third time is the most extreme tempo change, where it gets to this ‘do or die,’ moment – and he doesn’t make it. The third hammer blow comes and it ends with a kind of a funeral dirge in the low brass and horns, dying away in the pianissimo between the bass clarinet, celli, and basses. Just as that note dies away, the brass comes in with this omnipresent minor chord. ‘Death always wins,’ is what I wrote in my score.” 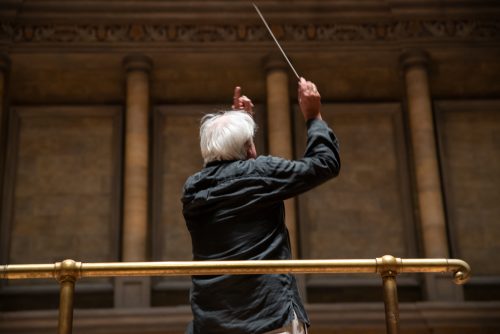 A rather puzzling conundrum surrounding the performance practice of this piece is the order in which to place the movements. There is always some controversy around whether the scherzo or slow movement should come second. The piece was initially published in the Scherzo-Andante order, but when first performed with Mahler himself conducting, it was performed in the Andante-Scherzo order. After the work had already been published, Mahler convinced his publisher to insert an error notice into every copy of the first edition to ensure that the work would be played in his preferred order. All this has led to somewhat of a “choose-your-own-adventure” performance practice, in which conductors decide for themselves which order best suits the journey of this piece best.

“Many people feel contrary to the way we’re doing it,” says Varon, “and a lot has been said about having the Scherzo movement come first in terms of key relationships. But research has shown this to be incorrect, because when Mahler conducted he only conducted the andante in the second slot. We feel it gives a greater dramatic difference when you play the andante in the second slot because there is so much more contrast, and contrast is what Mahler is all about.”

Maestro Varon also noted that the famous Dutch conductor Willem Mengelberg had also said that Mahler never specified any other spot for the andante other than the second slot, and Mengelberg was one of Mahler’s closest compatriots.

The Eastman Philharmonia performance of Mahler’s Sixth Symphony will be followed by a three-day residency by Maestro David Zinman. This also includes a two-day master class focusing on the symphony, and will be attended by six young conductors chosen from a large pool of applicants. These young conductors will have the opportunity to conduct Eastman’s premiere orchestra: Eastman Philharmonia. Participants include William Kelley (Lucerne, Switzerland), John Lidfors (Bochum, Germany), Tristan Rais-Sherman (Brooklyn, NY), Sam Weller (Sydney, Australia), Trevor Wilson (Ottawa, Ontario, Canada), and Shun Yao (Cleveland, Ohio). This also gives Eastman Philharmonia players the opportunity to work with Maestro Zinman in advance of their big performance of Bruch’s beloved Violin Concerto No.1 with superstar violinist Joshua Bell, along with Schumann’s Second Symphony, under the direction of Maestro Zinman on April 12, 2019 in Kodak Hall.

The performance of Mahler 6 on Wednesday, November 14, 2018 is free and open to the public.

Tickets for Joshua Bell and David Zinman in concert with Eastman Philharmonia
on April 12, 2019 are available online at EastmanTheatre.org, in person at the Eastman Theatre Box Office (433 East Main St.), or by calling (585) 274-3000.