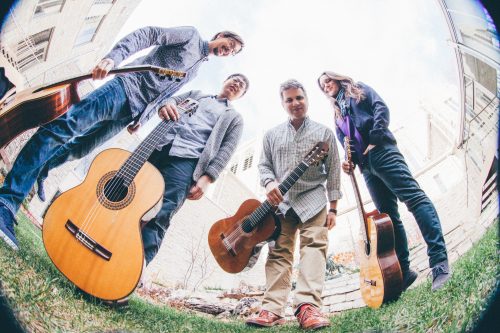 The Tantalus Quartet is an ensemble of four classical guitarists that currently features Kristian Anderson, Stephen Mattingly, Lynn McGrath, and Sungmin Shin. Founding members, Anderson and Mattingly, formed the group back in 2004 and started to perform professionally in 2006. Lynn McGrath, who knew Mattingly from his work as a soloist and as a member of Tantalus, joined the group in 2013 while Sungmin Shin, the quartet’s most recent addition, joined in 2016. Summer @ Eastman presents The Tantalus Quartet Thursday, July 19, at 7:30 p.m. in Hatch Hall.

Named by founding member Kristian Anderson, the quartet’s identity comes from Greek mythology, “Specifically about the myth in which Tantalus brings the secrets of music from the gods down to Earth,” Mattingly explains.

While its members have played in much larger and more diverse ensembles, they agree that performing in the quartet has provided them with valuable experiences that they can apply to their careers as both teachers and performers.

Shin describes how, in order to succeed, you must balance your own sounds with that of the group. “When you have a guitar quartet, you’re trying to be one common idea, but at the same time we still have to preserve our own personalities.”

What he finds beneficial about playing in the quartet is the connection he is able to make with his fellow musicians, and finding the balance in which every aspect of a performance comes together. “It’s a connection that you make with music and sound; you’re playing together and everything kind of just clicks together. You could probably get that in a larger ensemble too, but with a quartet it’s still intimate enough for it to be a special thing.”

Agreeing with Shin, McGrath adds that she finds rehearsals and performances to be an enlightening experience. “I’m always learning and growing as a musician. It seems like that might be limited with just a six-string instrument, that there’s only so many sounds you can get, but it’s not true. I keep discovering new sounds, new ways of approaching a phrase, new ways of thinking about music through my interaction with the quartet.”

Echoing his quartet members’ thoughts, Mattingly says, “We’re working in a collaborative effort in an ensemble, and it’s such a strong connection that we feel as artists individually and collectively in this group. It’s rewarding in every performance.”

A natural fit for all its members, playing in the quartet is a wonderful experience that has allowed the group to expand the boundaries of the traditional guitar quartet. Shin explains, “When we do these arrangements of older music, we’re able to do things that you just can’t do on one guitar, and that helps us to push the boundaries of what guitar can do musically.”

Coming together to make music, though rigorous at times, is an enjoyable time for the quartet. While the music they make blends together in a seemingly effortless way, each musician had different starts to their guitar journeys. 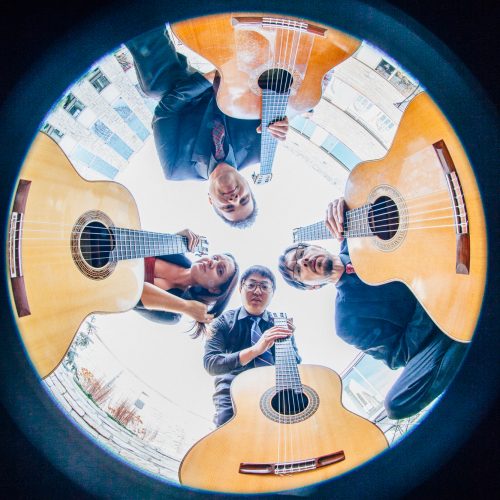 Mattingly, an Eastman alum, graduated with his Bachelor of Music in 2000 and his Master of Music in 2001 and is now an Associate Professor of Guitar at the University of Louisville. He first picked up the electric guitar, and recalls that what drew him to music was rock and roll. He discovered classical guitar by examining his idols and the influences behind their own work. Starting out, he remembers how music gave him a voice, acting as an outlet to describe his feelings.

“For me, the pursuit of music was both an escape from the world around me that was too much as a young kid to put words to, and it was vocabulary to put voice to those feelings that I didn’t yet have words to express. Later I saw it as a connection to friends who also played music and a connection to the audiences that I began to play for. I saw the rewarding aspects of playing for an audience, and I wanted more and more of that experience of sharing,” Mattingly reflects.

Shin, also an Eastman alum, graduated with his Master of Music in 2011 and is completing his Doctor of Music Arts degree through Eastman this year. Starting with both the electric and acoustic guitar at the early age of 10, Shin enjoyed the community feeling he experienced when playing the instrument. “From fairly early on in my music experience, it was very much a communal and social thing for me. I found a lot more inspiration and joy playing with other people, whether it was playing with guitars or other instruments.”

First completing a degree in Spanish Language and Literature, McGrath found guitar as her second career. While she dabbled in playing guitar and reading music throughout her early teen years, McGrath did not discover her talent until studying Spanish abroad in Mexico. “I bought a really cheap guitar, and I happened to find an incredible teacher who was teaching at the university I was attending [SUNY Potsdam’s Crane School of Music].He was the first person to say, you can do this as a career.”

Grateful that her early exposure to the instrument was able to open doors for her in the future, McGrath is now a Senior Guitar Instructor at the Eastman Community Music School. While McGrath played clarinet and sang growing up, she was drawn to the intimacy that the classical guitar provides. “I’ve always just loved the feel of pushing in the strings and the way the instrument vibrates – there’s a tactile sensation and an intimacy that the classical guitar has, which no other instrument I listen to does.”

Excited for the upcoming performance, the group says that Tantalus traditionally performs modern music written by living composers. The quartet will be playing a piece arranged by Shin himself. McGrath notes, “I think a lot of people, when they’re thinking classical guitar, don’t realize that it’s a medium for so many layers of expression, and that so many different moods can be created through the guitar.”

With the intent that the audience is moved by the performance, yet still having a good time, the quartet invites people of all backgrounds to attend. “You don’t need to have a degree in music to be moved by this kind of music. Everyone’s welcome – come listen, be moved, open your mind to what’s out there,” McGrath says.

McGrath further emphasizes that it is up to the audience to interpret and find meaning in the pieces the quartet will be playing. “The constant balance that you have as a performer is to bring out what the composer intends as best as you can, and yet, to also have something fresh, to have your interpretation, to treat their music with respect, and to have conviction in your interpretation. Anything beyond that is up to the audience member.”

After the Tantalus Quartet’s performance Thursday, the group will make its way to the University at Buffalo, where Shin is an Adjunct Instructor of Guitar Performance, to work on promotional recordings. On Saturday, all four members will perform for the third time at the Iserlohn Guitar Symposium, a festival in the small town of Iserlohn, Germany. The week-long festival includes lessons taught by the musicians along with 14 concerts, which the quartet is grateful and excited to be a part of.

On behalf of the entire quartet, Mattingly wants to share a heartfelt thank you to Eastman for making the concert on Thursday possible. The Tantalus Quartet is excited to be back, performing on an Eastman stage.