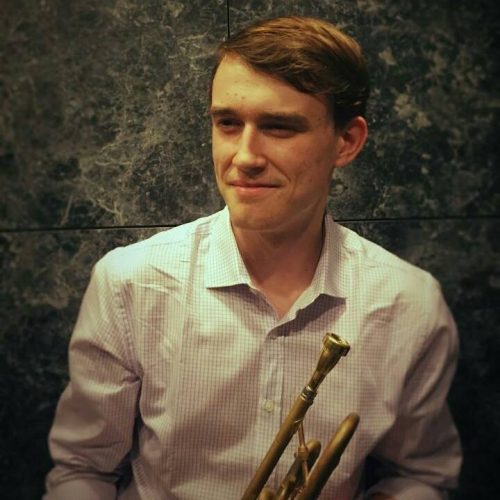 Trumpet player and composer Nathan Kay hails from Oconomowoc, Wisconsin and is a senior jazz performance major at Eastman. During his time at Eastman, he founded his own bands, such as the Nathan Kay group. Kay won First Place in the 2018 National Trumpet Competition (jazz division) and has performed at various venues across the country. He’ll be playing with the Nathan Kay Quintet at the East Avenue/ Gibbs Stage, tonight (Monday, June 25) at 6 p.m.

The Nathan Kay Quintet offers audiences everywhere a fresh and innovative take on jazz. The group features original compositions by Nathan Kay and feature diverse harmonic characteristics and nuanced melodic lines. Kay is a musical storyteller; he uses jazz harmony, gospel chords, folk-infused melodies, and rhythmically driving drum lines to engage with his listeners. Rochester’s CITY Newspaper has celebrated Kay’s compositions, stating: ”Kay is an excellent composer… the tunes are so strong, you might think you’re hearing an obscure standard.”

When did you pick up the trumpet?
I picked it up in fifth grade, and my dad was the band director at the small school I went to, so he was my first private teacher too.

What/whom were you listening to when you were younger that you would consider influences now?
I grew up in a church. I don’t consider myself religious – at all – but I do take the music from that feel, it’s a crossover with everything else with the harmonies from church music.

I’ve gone through so many phases, from rap to R&B, to electronic music to pop music, even to rock, and then to jazz.

Who are some of the jazz trumpet players that you drew inspiration from?
The first trumpet player that I fell in love with was Lee Morgan. I heard him randomly, I just asked a teacher, “Who should I listen to?” and he said, “Lee Morgan.” I checked him out, and from the first second I heard him, he just had a really beautiful voice, and spoke through the instrument in a way that resonated with me at that age. It’s hard to get into jazz when you’re younger, but his sound inspired me.

From there, I started checking out everyone. A player that comes to mind is a trumpet player and composer, Kenny Wheeler, he’s a big inspiration compositionally for me. I like his sound a lot.

Since you were already used to the weather, what brought you to Eastman?
I was doing this camp in high school – it was basically the all-state jazz band — and I did that for two years. The second time I did it, the director asked me if I knew Clay Jenkins. I replied: “I have not heard of him.” He said: “Clay Jenkins is one of my best friends, and you should check him out. He’s teaching at Eastman now.”

I was about to be a senior in high school at that point, and so I started seriously considering Eastman. I had heard about Eastman because of its reputation as a great East Coast school… But I applied on a whim, and I don’t know if I’d get in.

But Eastman was a really welcoming place, and the people there were great. Clearly it was a good choice for me.

Tell us about your show on Monday!
Yes! It’s a quintet I put together for the show with my own original music. The band is Rowan Wolf on sax, Lex Korten on piano, Mikailo Kasha on bass, and Stephen Morris on drums.

I write pretty frequently, and because of that, I tend to play things on my performances that are more recently written. One piece we’re playing I literally wrote a couple of weeks ago. All of it was written within a year. One of the pieces will be brand new, the first time I’ve ever played it for a crowd.

I did this residency in Washington, D.C., at the Kennedy Center, for two weeks. One piece we’re doing is a reflection on the time I spent there and the people I hung out with, the things I learned … All of the pieces we’re doing are reflections on experiences I’ve had. They all have a story behind them.