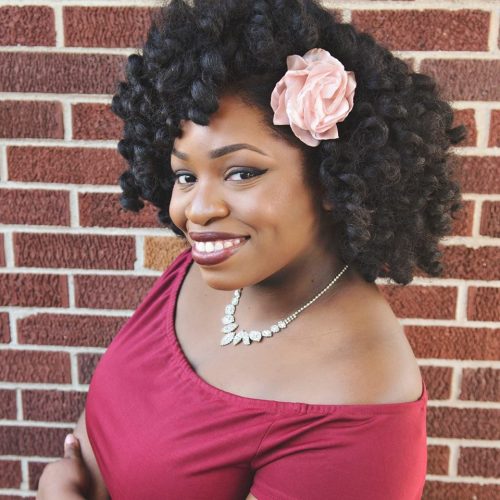 The Links Scholarship, a cooperative effort between the Rochester, New York Chapter of The Links, Incorporated, and the Eastman School of Music, recognizes and celebrates the extraordinary talent and academic achievement of an African-American scholar musician. Eastman’s 2018 recipient, announced this spring, is a Master’s student in voice, Veena Akama-Makia.

Students are nominated for the LINKS Scholarship by members of the Eastman voice faculty, so not only did Veena not know if she would receive the 2018 award; her win came as a complete surprise. (She admits she had never heard of the Links Scholarship until she was told she won it.)

“I found out in March, just before spring break,” she recalls. “I had to plan a full recital for April.” Luckily, Veena could draw on a varied repertoire including songs by Mendelssohn, Montsalvatge, and Barber, along with a number of spirituals, and Gershwin’s “My Man’s Gone Now” from Porgy and Bess. And the recital went splendidly.

“I was truly honored,” she says. “I am the first vocalist to win the scholarship in a while.” Previous Links Scholarship recipients include Julia Bullock and Nicole Cabell, who have gone on to fame in the operatic world.

Veena recalls singing “since I was a little girl” in Arkansas, and like many singers got her first exposure to music in church. Her sister, who taught herself to play the piano, also taught Veena some rudiments of music by trying to harmonize at the keyboard and performing duets together. She describes those elements as the “solid rocks” on which she built her musicianship.

Her first exposure to classical music was a performance of The Nutcracker, which led her to take violin lessons. She also had “a passion of vocal music” and took voice lessons in high school – not with the thought of becoming a soloist, but to improve her performance in choral competitions.

She was introduced to operatic singing by her teacher, Ms. Mary Wynston-Smith, who played her recordings of such great African-American divas as Leontyne Price and Jessye Norman.

“It was suggested that I train as an opera singer, and my response was, ‘What is opera?’. I had no idea, although I could already tell that my voice was not really suitable for singing pop music. But when I heard those singers, I had an overwhelming feeling that my voice fit in somewhere.”

Veena continued to develop her voice and technique at the University of Central Arkansas, and now at Eastman, where she is firmly established as a mezzo-soprano after her first year as a Master’s student in the studio of Kathryn Cowdrick.

“I’ve learned I don’t really have the voice type to comfortably sing light, rapidly moving music, like Bach cantatas,” she says. “But what I’ve developed here is what I needed most: skills in performing art song and discovering the most appropriate repertoire for my type of voice.”

As a Links Scholarship recipient, Veena is looking forward to visiting local schools, performing for and talking to students “where music and the arts are not equal to other subjects, exposing them to Eastman and to classical music. At a young age, it’s easy to turn up your nose at something you haven’t been exposed to, and say “’classical music is not for me,’ or ‘It’s stuffy’, or ‘It’s in a different language I don’t understand,’ or ‘Nobody who performs classical music looks like me'”.

For that reason, she was pleased to see children in the audience for her Links Scholarship recital. “I want to be the one who introduces them to opera and classical music, the one who plants that seed. That is why I am developing my craft and why I want to be an artist.” 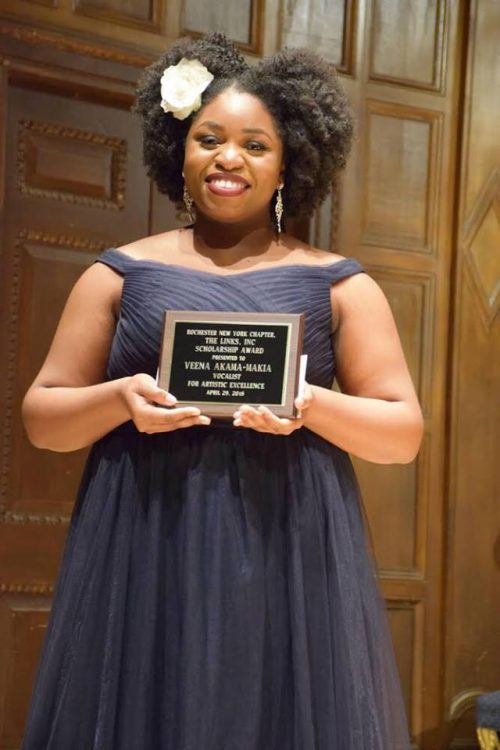 For more information on the Links, Incorporated, and on the Links Scholarships, go to linksinc.org.