GET YOUR ROAR ON! SUMMER AT EASTMAN 2018 TRUMPET RETREAT 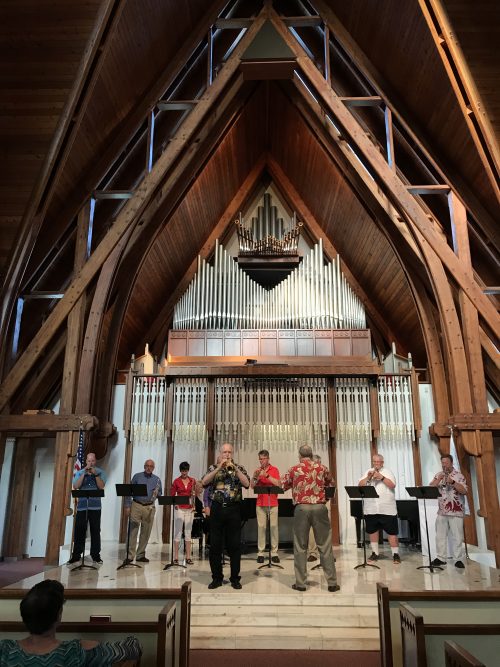 Participants in the 2017 Trumpet Retreat, in the chapel of Keuka College

This year, Summer@Eastman offers a Trumpet and Trombone Retreat at Keuka for adult players (June 24 through June 30) as well as a Trumpet Institute on the Eastman campus for high school and collegiate students (July 29 through August 3). Both feature Eastman faculty members and veteran guest musicians and master teachers. For information on either class, go to www.esm.rochester.edu/summer. Here, the Trumpet Retreat’s director, Jim Thompson, and a participant, professional trumpeter Mike Zonshine, share observations about trumpet playing and about the Retreat.

The Trumpeter’s Palette
By Mike Zonshine

In 1998, after nearly 30 years playing principal trumpet in several orchestras, I left the Atlanta Symphony to teach at the Eastman School of Music. I thought, “That’s it, no more playing in an orchestra for me.” But I was surprised to find myself frequently engaged with gigs in orchestras as well as an occasional stint touring in Europe or Asia. My reaction to each new experience was, “Wow, these folks are incredible. Everything is at the highest level.” But I also noticed that as excellent as each orchestra was, they were all different.

My question was, since they are all striving for the same thing — intonation, rhythmic precision, balance, phrasing, etc. — what made them sound different? The opportunity for me to play with and compare these great orchestras helped teach me to hear what I call the Trumpeter’s Palette.

The Palette is comprised of attack, length of sustain, taper, volume, and vibrato. By listening and learning to manipulate these components, you can play in any style and with any group. This is comparable to the painter’s primary colors or the primary flavors we experience on the tongue. The possible combinations are infinite. I want to offer work with orchestral trumpet sections on differing styles and share my experiences about various conductors’ interpretations.

Come to the Trumpet Retreat at Keuka and let’s put our heads together and work on our palettes. Hope to see you there!

I recently watched and listened to a YouTube performance of the magnificent Maurice André. He was playing a piece he had done many times before, and of course it was beautiful.

However, as I listened to this interpretation, I was struck by the difference in his playing compared to earlier versions: virtuosic, of course, but at the same time more introspective. His playing had taken on more dimension and emotion.
I looked again at Maurice and his head of white hair and realized he was not the spring chicken of my youth. An old saying popped into my head. “Old lions roar to see if they still can. “ He certainly still could!

Many of my trumpet friends hang up their horns because of lack of playing opportunities, physical problems, or lack of inspiration. I say, come to the Eastman Trumpet Retreat at Keuka and get your roar on!