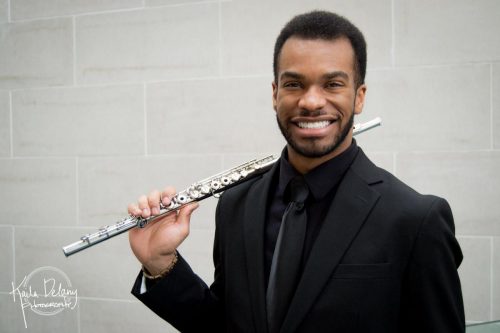 On Tuesday, April 24, flutist Adam Sadberry will perform live on WXXI-FM’s show Backstage Pass. But this Eastman senior from the studio of Bonnie Boyd has already had a momentous year.

In February, Adam won the Detroit Symphony Orchestra’s African-American Fellowship. Adam will be a member of the DSO flute section for at least the next year (the fellowship is awarded on a year-to-year basis). The DSO Fellowship Program is designed to enhance the career development of African-American orchestral musicians and the diversity of professional orchestras. Earlier this year, Adam was also First Prize Winner in the National Association of Negro Musicians’ Scholarship Competition for Winds and Percussion in New York City. He will advance to the regional competition this month.

Along with performing, Adam is now an intern with the Eastman Community Music School, where he coordinates the “Practice Buddies” program connecting mentors and students.

Originally from Montgomery, Texas, Adam began playing the piano at age seven and singing at church soon after – “the first moment I realized I loved music.” He moved on to the flute at age eleven. (He recalls being one of only three boys playing in the school band’s flute section, along with about 20 girls.)

He performed in his school band program all the way through graduation along with being the principal flutist and piccolo player of the Houston Youth Symphony for his last two years of high school. He vividly recalls performing the Shostakovich Symphony No. 5 with the World Youth Symphony Orchestra as a student at Interlochen and being “captivated by the intensity of all us performing together. It made me realize that nothing is more rewarding than teamwork.” He became the silver medalist in the Houston Symphony League Concerto Competition, and a performer on National Public Radio’s From the Top as a Jack Kent Cooke Young Artist.

Already with an outstanding performing resume, he found Eastman the ideal place for him. “A cousin preceded me at Eastman,” he recalls. “I paid a visit and fell in love with the place, I had a wonderful experience. That’s the biggest reason I joined the Eastman Orientation Crew and became a residential advisor, to help create that sense of community and also to give applicants the best audition day possible.”

As for Adam’s most memorable Eastman performance: “I’d have to say it was our Philharmonia performance in New York with Renée Fleming. [The Philharmonia performed the premiere of Letters from Georgia by Kevin Puts ‘94E ‘99E (DMA) with Ms. Fleming ‘83E (MM) in November 2016 in Rochester, then repeated it in New York’s Alice Tully Hall.] Performing with all my friends put a special light over this event, and doing it in New York was even cooler!”

Interestingly enough, among the many classes Adam has taken at Eastman, he singles out a non-musical one: an art history class in Impressionism and Modernism taught by Lucy Winters Durkin, “the most vivacious teacher I have ever had – she got me excited about art.” 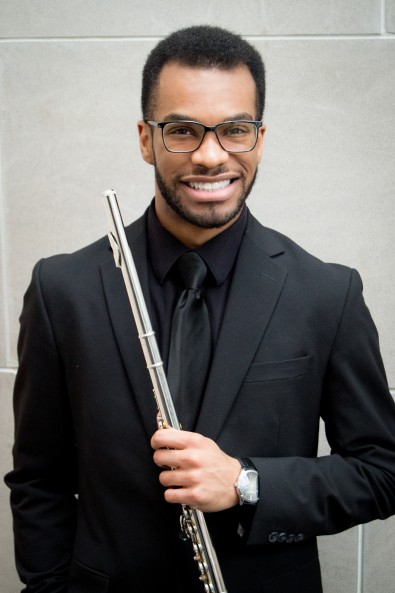 Adam is excited about his upcoming period with the Detroit Symphony Orchestra, an organization he describes as “aware of the cultural divide between the orchestra and the African-American community and extremely successful in bridging it”. As an African-American Orchestra Fellow, Adam will be with the DSO for 18 weeks of its season, receiving lessons, and doing orchestral mock auditions. He will also be a part of the orchestra’s outreach to the Detroit school system and its “Classical Roots” series exploring music and musicians of African descent.

Adam is highly invested in efforts that give greater exposure to classical musicians of African descent. At Eastman he was designated the 2017 LINKS Scholarship recipient and took part in the 2017 Gateways Music Festival. Both were very meaningful experiences for him, highlighting that “while there are relatively few classical musicians of color, they do exist and are just as talented as any other students.

“I did not play in the Gateways Orchestra, but I played chamber music there, and also mentored Eastman Pathways program students and played in the side-by-side orchestra between Gateways and Pathways students. I may have been two inches taller, but they were professional as far as I was concerned. And I knew it was so important for them to work with me, or to watch the members of the Gateways Orchestra, and see a reflection of themselves.”