All the things she was: Eastman Celebrates Jazz Giant Marian McPartland 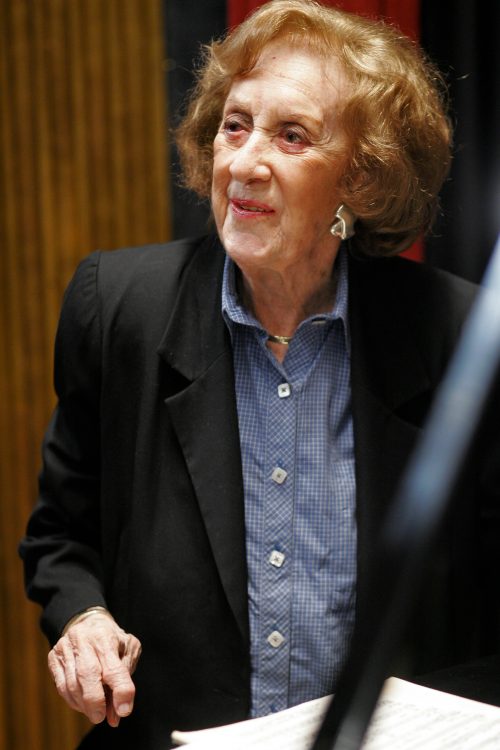 Marian McPartland at Eastman in 2006

An accomplished jazz pianist, Marian McPartland (1918-2013) was a much-beloved presence on National Public Radio as host of Marian McPartland’s Piano Jazz for more than three decades. Piano Jazz offered listeners an intimate, insider’s perspective on the elusive world of jazz improvisation. On her weekly broadcast, the British-born McPartland interviewed and performed with practically every major jazz musician of the post-WWII era.

Over the course of her illustrious career as a performer, educator, and writer, Marian McPartland also performed many times at the Eastman School of Music. Eastman’s Marian McPartland Centennial Celebration, on Friday, March 23 in Kodak Hall, will be an energetic evening of show-stopping jazz by Eastman faculty members, with guests Monty Alexander, Bill Charlap, and Renée Rosnes. They’ll join in celebrating the 100th anniversary of Marian’s birthday, as well as the rich legacy she created in Rochester and around the world.

I spoke with Jeff Campbell and Harold Danko about Marian, her life, and the celebration of her centennial.

Can you talk about Marian’s connection to Rochester?

Jeff Campbell: Her attorney, Tom Hampson, lived here in Rochester! So whenever she had legal issues to deal with, she came to Rochester; her physician lived here too. She also worked with Ray Wright at Eastman, and of course she knew Harold (Danko) and Bill (Dobbins). Plus, she did so many concerts here – before my time – but I’ve heard people talk about those years after, so she did have a fan base in this community.

Harold Danko: She always liked to come up and visit. I didn’t know that; I knew her in New York, but when I came to Rochester I had no idea that she was so connected. It was a pleasant surprise.

Everyone thinks Marian as the host of Piano Jazz, and this is somehow strangely overlooked, but she was an incredible pianist.

JC: She was. I got to play in her trio. I played with her quite a few times with Rich Thompson, and we traveled around the state. I got to be in a dressing room with her behind the scenes, and I got to talk with her about tunes and rehearse with her.

She’d say things like: “Let’s play ‘All the Things You Are,’” with that great British accent, and she would just start playing, and I would think to myself: “Oh my gosh, she’s in C-sharp major. Wow.” She was just so fluid in her capacity as a musician, and she wasn’t gimmicky with the fact that she could do that, she did it because – at least in my opinion – it was refreshing. It was a new challenge, a new opportunity to advance her musicianship.

HD: First off, when I did the show with her, she had absolutely no planning, she would just wing it. “What key would you like to do this in,” she would ask, and I’m just a young guy in New York, so excited to be on her first one hundred shows, but she was so casual and talented that the key didn’t matter to her.

When I asked her about certain harmonic ideas, she would reply, “Oh, it’s not trial and error; I’ve been doing it a lot longer than you.” It didn’t come out of this studied place, it came out of a natural musicianship, and she could play with anyone. If she were playing an AABA tune, each “A” section was never alike. She would maybe start out simple, and then do something more complex, or the opposite. She had a way of naturally approaching these tunes, and going wherever the tune went.

“Refreshing” is a great word. Right now we’re overly saturated with media/content/commentary, but when Piano Jazz first came on the air, it was refreshing in its style and approach, not to mention the new buzzword, “women in jazz.” Can you reflect on that legacy?

JC: Marian told me also that the reason she got that show is because Alec Wilder set her up, and that there was some work he was doing with NPR. He just moved a couple books out of the way, and moved a desk, and set things just right, so when they needed somebody [for a new show], she was available and so was the guest. He prepped them for her.

One time she did her show here with some of her English colleagues. I played along with her, and her left arm was broken, so she asked if I could play the low notes! She was so uplifting with other people, and that’s why we want to celebrate her with this concert, because everyone she ever met she uplifted in some way. She was a boon to their existence.

HD: She was a really funny and generous person. She was not only a great musician, but a great friend to musicians, and she made herself very available to everybody.

I first met her while I was at the Vanguard with Thad Jones and Mel Lewis, and she was around and always friendly. Then I got to really know her when we were both on the faculty at the Manhattan School of Music for their jazz program, around 1984 I believe. She’d been hired as a big name to come in and teach, and I was among the first hired professionals.

She’d never taught, really, and she would ask: “I have these people 14 times this semester, what do I do?” She was just having them learn tunes and transpose. I had some private students and she had some private students, and I had a piano styles class in my apartment. At that point I was an assistant professor and I would take students, but they had to come to me. She would come to the apartment for these classes and bring wine.

I love telling this story too: it was the beginning of the jazz program (at MSM), and they asked her to do a solo concert as her arrival concert, and she said, “Why don’t Harold and I do a duo concert?” She threw that right to me in that way. I remember when I told Tom Hampson that, he said, “That’s just another day in the life.” She would do always do what was a no-brainer and the right thing to do.

So I was able to the duo concert with her, and she invited me on Piano Jazz, and it was so easy. The way she would handle herself was very casual, and despite the English demeanor she had… And I’m sure you’ve heard of her swearing, which was the most wonderful thing.

HD: She had a jazz musician’s mouth. She was married to Jimmy McPartland [jazz cornetist who played with Benny Goodman and Tommy Dorsey, among other bands], and she was the young babe then. She would arrive someplace, and if the luggage wasn’t there, she would say: “Where’s the f***ing luggage?” with that accent. The most precious time was the first time you heard it … it would take you aback, and you would savor it. She had a very full vocabulary; if things weren’t quite right, she would discuss it in the way we all talk about things.

One other example of her generosity that should be noted is that she had two of my piano students, Jeremy Siskind and Chris Ziemba, on Piano Jazz. She just heard them play, and she liked them, and invited them on the show.

She did present a series here, four years in a row for a scholarship, presenting Roberta Piket, Jason Moran, Reginald Robinson, and Eldar early on in their careers. She contributed money to the school, and I was able to send two students to Europe for workshops. She was so generous, and did a lot more than she gets credit for.

Can you give us a backstage-pass version of the development of this concert?

JC: The idea came from Harold. He realized that it’s Marian’s 100th birthday, and nobody else is doing anything about it, or doing a celebration. He really hatched it, and he worked with Keith Elder [former ESM Director of Concerts] to make it happen. Then of course Harold retired, and Keith left Eastman, and then [pianist] Gary Versace joined the faculty … the ball was in the air, and we couldn’t let the ball drop, so we had to step up and figure out what to do.

HD: This whole thing was instigated with me and Teresa Chen, a doctoral student who reminded me of her upcoming centennial a couple years ago. I looked to see if anyone was doing anything special, and I found the answer was “no.” I said, if no else is doing it, Eastman should do it. I worked with Keith Elder at the concert office, and worked together to think of who would work.

JC: Gary has been quietly been very key in helping us develop the right pianists and the right people for the best fit, and we’ve been through many thought processes to identify who are the right people to celebrate Marian. The other thing we’re doing is having two two-hand duets by Eastman faculty members. Harold and Tony Caramia, and Bill Dobbins and Gary Versace, are playing duets in each half of the concert.

In addition to the big concert, Teresa Chen presented music and a talk on Tuesday night, and there’s an Eastman Chamber Jazz Ensemble concert tonight as well.

JC: Bill Dobbins has organized several student ensembles to play Marian’s music, or play music that she performed and is associated with. That concert will celebrate Marian’s music with a student perspective.
Right now I’m looking around my office and I have an original copy of her handwriting on a leadsheet of “While We’re Young” …

Finally, can you tell us what exactly is happening on “the night of”?

JC: Each half of the concert starts with a faculty-members duet, and then Bill Charlap and Renée Rosnes. Then we go to Monty Alexander. Then we have a couple of video clips of Marian and her conception of how she plays. The last thing will be a clip of Marian playing “Things Ain’t What They Used To Be.” You’ll see her playing on the screen, then we’re going to fade in live music on the stage with Monty’s trio and all seven pianists in and out. And we fade back into Marian playing the piece, finishing the concert.

Eastman Presents the Marian McPartland Centennial Celebration this Friday, March 23, at 8 p.m. in Kodak Hall at Eastman Theatre. For information about the show and ordering tickets, click here.