A Tale of Two Siblings: Preserving Youth through Imagination and the “Game” 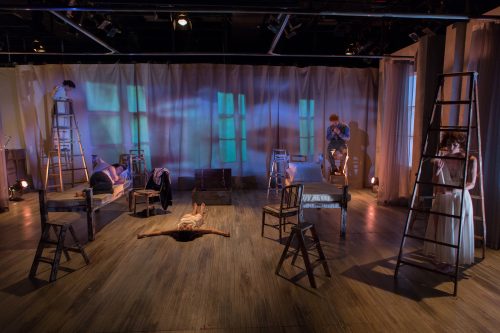 Les Enfants Terribles officially opens this weekend at Eastman to a sold-out audience. And rightfully so, given the intricate staging juxtaposed with transcendent music and intimate performances by the cast. I was able to attend the student premiere on Friday, January 26, and was astonished by the entire production; from the placid ballet dancers who seem to watch every event, the dynamic yet creepy set, and committed performance from the cast.

The music was especially enticing. Philip Glass’ signature minimalist style was a staple of this opera, and appropriately fit the overall story, by Jean Cocteau, of two siblings, Paul and Elisabeth, who seem stuck in a constant state of sibling rivalry, which to them is nothing more than a “Game” that consumes their lives. The repetitive musical patterns become more intense during the siblings’ “Game” and during transitional periods, become calm. Kaleigh Sutula (Elisabeth) comments that the piece “demands stamina and intense concentration from the cast”. 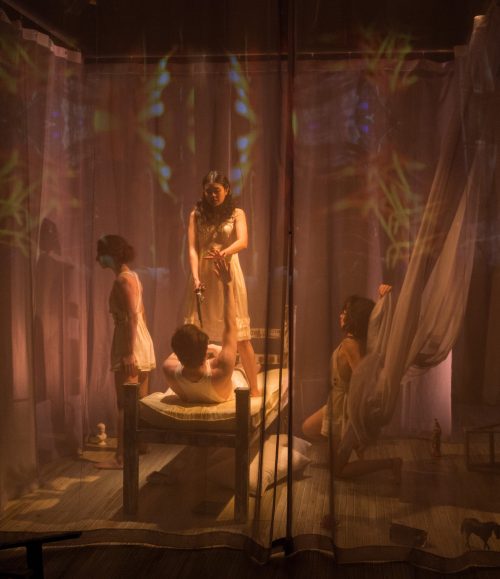 “A constant state of sibling rivalry”: above and below, scenes from Eastman Opera Theatre’s Les Enfants Terribles.

But with the help of Stage Director Steven Daigle and Music Director Wilson Southerland, the cast rose to the challenge. Kaleigh also mentioned that “Professor Daigle…[allowed] us plenty of suggestions to aid the flow of the piece and to keep us from losing our heads.” I’ll speak from my own experience and say that, from a student perspective, we are lucky to have an incredible Opera Staff who constantly push us to be strong artists, and also aid our development as we learn new techniques and maneuver through various styles of music.

The tense relationship between the siblings never really dissipates; rather it becomes more intricate and convoluted as the opera progresses. The final scene is a culmination of years of their rivalry. “I really love the last scene,” comments Sutula, “where the height of the drama comes to a head…there is a controlled chaos that is striking every time I see it.” 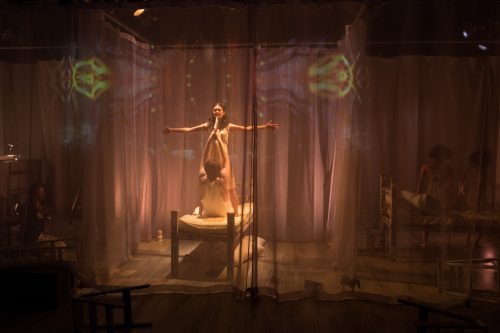 The multi-dimensional experience wows audiences with projected images, stunning lighting, and a set that remains constant in the characters’ minds while their reality is altered around them. While it is not exactly stated, some of the projections could represent the characters’ subconscious. At times, however, the falling snow represents the reality that continues to pass by the siblings as they fall further into a world of fantasy and child-like games.

Kameron is a second-year Master’s degree student in voice who contributes to Eastman Journal about events in Eastman’s Voice and Opera Department.