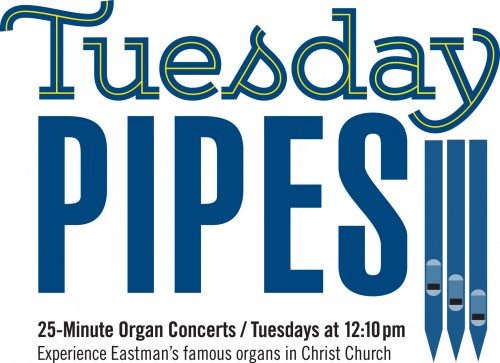 It’s early November, and Rochesterians are already digging out their snow brushes, hearing Christmas tunes in coffee shops, and seeing Black Friday Sale signs around every corner. If you’re like me, you may be looking for a few minutes to escape the humdrum and stay warm this winter. For that, I turn to Tuesday Pipes, a weekly concert series featuring Eastman musicians and the spectacular pipe organs of Christ Church, Rochester.

I am not an organist myself, but after just a few minutes at a Tuesday Pipes performance, I am enthralled by the diverse sounds of two instruments that represent more than a hundred years of organ building and design. The Craighead-Saunders Organ is a scientific process reconstruction of an instrument that still exists today in Vilnius, Lithuania, created by central German organ builder Adam Gottlob Casparini in 1776. Completed after six years of research into 18th-century organ design, it is perhaps the only instrument in the United States where one can hear the music of J. S. Bach just as Bach would have heard it. On the other side of the pews, the Hook & Hastings Organ represents the American Romantic tradition, featuring original pipes from 1862 and 1893.

This week, hear a joint collaboration by Eastman doctoral students Caroline Robinson and Amanda Mole. Robinson is a Fulbright scholar who previously studied in Toulouse, France, as well as at Philadelphia’s Curtis Institute of Music. She has won numerous national organ competitions and serves as Executive Assistant for Outreach of the Eastman Rochester Organ Initiative (EROI). Mole came to Eastman after earning degrees at the Yale Institute of Sacred Music. An accomplished soloist and choral conductor, she has toured around the globe and earned first prizes in competitions throughout the United States. Together, these artists will perform works by composers ranging from Camille Saint-Saëns to J. S. Bach. Be sure to arrive in time to hear Saint-Saëns’s Fantaisie in D-flat, an elegant and affecting piece that features the full gamut of organ stops and sounds.

On November 21, Eastman master’s student Käthe Wright-Kaufman takes the stage at Christ Church. Kaufman recently returned from a year of study in Cornwall, United Kingdom, where she encountered two of the works she will perform this month: music by British composers Herbert Howells and Kenneth Leighton. She has been featured on the radio program Pipedreams Live! and received first prize in the 2015 West Chester University International Organ Competition. She is also a vocalist in the Christ Church Schola Cantorum and serves as Organ Scholar of Westminster Presbyterian Church in Buffalo, NY.

Be sure to return to this blog for regular updates about Tuesday Pipes performers and events. The series runs 52 weeks per year, and performances on December 19 and 26 will feature a range of holiday favorites by Eastman students, faculty, and guests. Don’t miss this free opportunity to hear some of the finest musicians and instruments in North America!

For more information on the Tuesday Pipes series, check out our webpage. Meanwhile, don’t miss out on other recurring organ concerts, including the Eastman Organ Community Concerts, Going for Baroque, and the Candlelight Concert Series.